Fall Celebration Set for Class of 2020

A celebration for the class of 2020 — whose Commencement was diminished by the COVID-19 pandemic — is scheduled for Oct. 9-10. Chancellor Kevin Guskiewicz told the class members last week that the majority of... 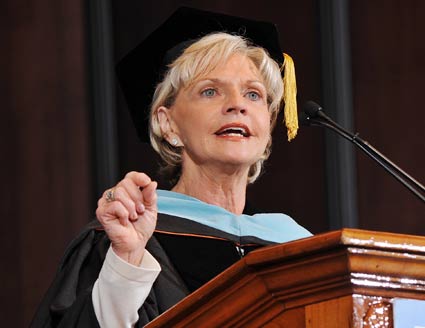 Carolina officials remembered the University’s past and celebrated its future during the Gov. Beverly Perdue, who gave the keynote speech at the celebration, commended the University community and faculty, which “has stood tall and continued to support the state and the University” in the face of historic budget cuts over the past year. “I am deeply grateful,” Perdue told the assembly, which filled most of Memorial Hall.

As the state’s 73rd governor and in her prior years of public service, Perdue has focused on jobs, health care and government efficiency. “North Carolina puts its hope for the future squarely on UNC,” she said. Detailing how Carolina created programs in previous troubled times, including in the years following World War I and during the Great Depression, she exhorted the University community to continue “Carolina’s legacy of service … [that is] woven into the fabric of the state’s soul” and help solve the “critical needs” the state faces now.

Chancellor Holden Thorp ’86, who presided at University Day, also presented an address that was distributed online. It, along with a video version of Perdue’s address, is available on the University’s YouTube Channel.

Before entering public service, Perdue, who holds a doctorate in education administration, worked as a public school teacher and as director of geriatric services at a community hospital in her hometown of New Bern.

University Day marks the laying of the cornerstone of Old East, the institution’s first building and the oldest state university building in the nation. The Carolina community first celebrated University Day in 1877.

Subsequent celebrations have featured speeches from distinguished faculty members and honored visitors including two presidents: John F. Kennedy in 1961 and Bill Clinton in 1993. Many North Carolina governors have made University Day a traditional stop during their first term of office.

The new Education Center at the N.C. Botanical Garden was to be dedicated later on Monday. It is expected to be the first public building in North Carolina to receive the highest level of certification for green architecture.

The nearly 30,000-square-foot center, a new gateway to the display gardens and woodland trails, was designed as a Leadership in Energy and Environmental Design (LEED) Platinum building. All systems and materials minimize environmental impact and include such technologies as photovoltaic panels, rainwater cisterns, stormwater retention ponds, geothermal heating and air conditioning, natural day-lighting and low-flow plumbing.

In 1906, University President Edwin A. Alderman, of the class of 1882, received an honorary degree, the first given on University Day. That practice evolved into the Distinguished Alumna and Alumnus Awards, first presented in 1971 to recognize “alumni who had distinguished themselves in a manner that brought credit to the University.” This year’s recipients were: