The lid on a Franklin Street culinary time capsule snapped shut just after Thanksgiving when Ye Olde Waffle Shoppe announced it would not reopen. The diner had been closed “temporarily” since late March after the...

Rat Could Be Back - And In a Big Way 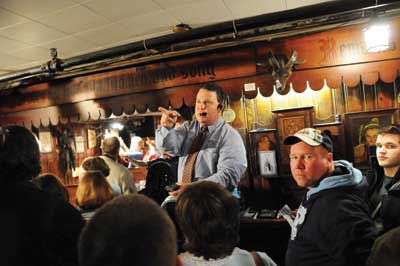 An auctioneer in February 2008 closed a deal as fans spanning several generations packed the Ramshead Rathskeller, snapping up pans, signs and other fixtures. The restaurant, which opened in 1948, closed in December 2007 and sold assets to pay back taxes.

Ben Jones ’50 remembers being the first patron to walk through the door when Ted Danziger opened the Rathskeller for business in September 1948. And he intends to be first in line when Diane Fountain ’80 reopens the underground tavern, perhaps as soon as the end of this year.

What Jones will see, should he become the first customer the second time around, will be the same old Rat of 62 years ago, only brighter, safer and cleaner.

In an industry where few restaurants last more than five years, the Rathskeller enjoyed decades of success as a spot where students and townfolk would take their dates and their drinking buddies alike. Many mourned the day in early 2008 when the Rathskeller was shuttered and its contents auctioned off to pay withholding taxes owed by its owner at the time, Francis Henry ’67.

Fountain, a real estate developer, learned in June — at the end of her son Chaz Green’s freshman year at Carolina — that the Rat sat empty. She looked into what it would take to reopen it, and over the summer she pulled together a team laden with Carolina alumni. Now she is ready to begin the process of getting permits to renovate the space and reopen for business.

“This is a dream come true for me, as it would be for anybody, to be associated with a restaurant with such history,” Fountain said.

The Fountain family has its own rich Carolina history. Fountain’s father, Jim Fountain ’55, who founded the N.C. Realtors’ Institute, was head cheerleader at Carolina and later helped bring the real estate curriculum to UNC. Her sister, Debbie Fountain ’77, is a journalism school graduate. Diane herself headed the Sweet Carolines and has her own memories of the Rat.

Danziger opened the Rathskeller off Amber Alley, in the basement underneath his father’s sweet shop. He named it after a German word that translates loosely as “cellar beer hall.” Jones recalls many pleasant evenings with friends drinking 25-cent mugs of Schlitz beer. Over time, Danziger added a modestly priced menu of meals that would fill you up for a week — dishes like lasagna (often called “the big bowl of cheese”) and a platter-sized steak called “The Gambler.” His wife, Bibi, made the cakes and fruit pies. Bibi took over the restaurant after her husband died in 1965. After her death in 1990, the estate ran the establishment until a group of local business owners pooled their resources to buy it in 1999; Francis Henry eventually bought out his partners and was the sole owner when it closed.

In making arrangements to reopen the Rathskeller, Fountain hired architect Jim Spencer ’90, who remembers going to the Rat on football weekends with his dad, beginning at age 5. Spencer and his wife, Caroline Spencer ’91, hope to be able to give their two sons the Rathskeller experience. Fountain also tapped the expertise of kitchen designer John Lindsey, who has worked on many restaurants in Chapel Hill.

“This is not about one person,” Fountain said. “This is about helping something that is very important to past, present and future students of UNC and affiliates of Chapel Hill.”

If all goes according to plan, Fountain will welcome customers to a renovated Rathskeller that preserves the nostalgia but “kicks it up a notch,” she said. The overhead ductwork will be gone, replaced by all new plumbing, mechanical and electrical systems. Fountain plans to add a second bar, complete with 65-inch plasma TVs, and a second entrance near Franklin Street. All the windows along the alley will be opened to bring in more light.

She plans to add a fireplace near the main entrance, and over it will hang a portrait of Papa Danziger that she found in the restaurant and is having reframed. She wants to enlarge the bathrooms and the kitchens, sacrificing the Mural Room to do so. The Train Room, the Circus Room, the Zoom Zoom Bar and the Cave will remain intact, albeit “sanitized,” she said, complete with the original booths that she is negotiating to acquire from the group of Chapel Hill business owners who bought them at auction. She may replace the table-top juke boxes with mini flat-screen TVs.

Fountain hopes to invite back some of the longtime wait staff, too.

“The Rathskeller is a landmark and an icon,” she said. “It’s part of many different people’s lives.”

Initially, the restaurant will be open only for dinner. Fountain wouldn’t dare touch many items from the Rat’s traditional menu, but she’ll add dishes that appeal to today’s diners, such as wings, top-notch steaks and pizza made from homemade dough. She plans to bring in a pastry chef to recreate some of Bibi Danziger’s cakes and fruit pies.

But first, the town must give its blessing for work to begin. Fountain and Spencer already have met with town inspectors and the fire marshal. One of the inspectors recalled bringing his wife to the Rat on their first date.

“The biggest challenge is getting inspections and the fire department satisfied with life safety in an old space,” Spencer said. “They’re really working with us, though.”