Saunders Hall is named for William Saunders (class of 1854) , a man acknowledged as a leader of his time — a Civil War colonel, longtime UNC trustee and a North Carolina historian of the highest order — and also acknowledged as the one-time leader of the Ku Klux Klan in the state. (Photo by Travis Long / The News & Observer)
Posted on March 26, 2015

In the 10 months since students presented an 800-signature petition calling for the renaming of Saunders Hall, two members of the UNC Board of Trustees have spent hundreds of hours — more time in Wilson Library than when they were students, said Charles Duckett ’82 — and interviewed about 200 people to try to reach a decision regarding the demands of the Real Silent Sam Coalition.

The board’s University Affairs Committee said Wednesday that it would take more time — and the committee members heard an earful in an emotional two hours that featured thoughts and opinions from eight invited speakers and from about 25 sign-carrying students. The students alternately praised and groaned at the comments and staged a recitation, which included the names of several people whose legacies include ties to white supremacy and the honor of having buildings at Carolina named for them.

A decision on whether to rename Saunders, along with a couple of other demands, could come in late May. First, Duckett and committee Chair Alston Gardner ’77 have opened the dialogue to the public on a website — bot.unc.edu/comments. The site will be open for comments until April 25. 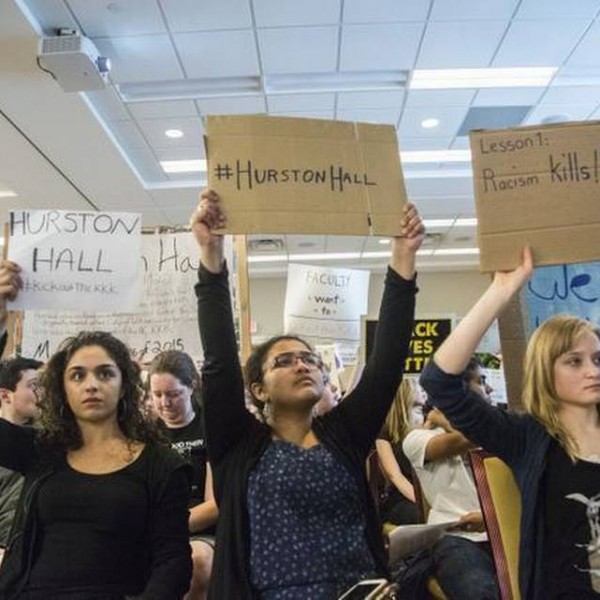 Students at the trustees’ meeting on Wednesday continued to make a case for renaming Saunders Hall, which honors Confederate colonel and Klan leader William Saunders (class of 1854). (Photo by Travis Long / The News & Observer)

William Saunders (class of 1854) is acknowledged as a leader of his time — a Civil War colonel, longtime UNC trustee and a North Carolina historian of the highest order — and also acknowledged as the one-time leader of the Ku Klux Klan in the state. Gardner said he and Duckett traced unhappiness with the naming to 1999, and one speaker, Sam Fulwood ’78, a senior fellow at the Center for American Progress in Washington, D.C., and an African-American, said he and classmates discussed it when they were students.

Members of Real Silent Sam declared at a rally in January that Saunders’ name symbolized the continuing second-class status on campus of blacks and other people of color and that they wanted the building renamed for writer and anthropologist Zora Neale Hurston. In 1940, long before blacks were accorded admission, Hurston — an African-American — sat in on classes briefly and in secret at the University.

The coalition also wants UNC to provide information on its racial past at freshman orientation and to attach contextual information to the Confederate war statue erected in McCorkle Place more than a century ago.

“Are we a diversity statistic?” asked senior Omolulu Babatunde, a member of the coalition. She said the issue is not so much about Saunders’ past as it is about what some people are doing now to keep racism alive. The students repeatedly invoked the social media site Yik Yak, which has been criticized by many, including Chancellor Carol L. Folt, for racist comments posted anonymously — some specific to Carolina students.

“The Jim Crow era was not a time a lot of people want to deal with,” Gardner said. He was echoed by speakers who urged the University to create a permanent dialogue about this side of UNC’s history.

Besides Babatunde, the committee invited comments from:

Most of the speakers said they supported changing the name of the building, which houses classrooms and the departments of geography and religious studies. Some said Saunders Hall — name change or not — should be transformed in part into a center for the study of the University’s difficult past. “Something more engaging than a plaque by the door,” Muller said.

Fulwood said no to renaming. “We owe it to future generations” not to suppress the truth about Saunders and those like him. “Context is key.”

Other nearby schools have dealt with renamings recently. Duke University and East Carolina University have decided to remove the name of Charles B. Aycock (class of 1880), whose name is tied to white supremacy, from campus buildings. Carolina also has a dorm named for Aycock.

Clemson University is discussing whether to rename Tillman Hall, a prominent campus landmark at the school’s main entrance. Tillman was South Carolina governor in the Reconstruction era and a leader of the Red Shirts militia, which campaigned to put down the black vote, sometimes violently.