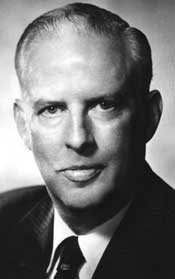 The University honored the memory of its fifth chancellor, N. Ferebee Taylor ’42, when it named a South Campus residence hall on Aug. 3.

One of five apartment-style buildings built in 2006 and now known as Rams Village was dedicated as Nelson Ferebee Taylor Hall. The building is across from the Koury Natatorium, which is adjacent to the Dean Smith Center.

“Chancellor Taylor’s commitment to the University spanned almost an entire lifetime,” said Chancellor Holden Thorp ’86. “He will continue to be celebrated for his enthusiasm for Carolina, his excellence as a teacher and his devotion to education.”

The hall houses about 247 students – Ram Village houses about 917 in all. The fully furnished student apartments range from one to four bedrooms, with one to two bathrooms per apartment. Each also has a living room and a kitchen. Other amenities include lounges, recreation areas, laundry rooms, meeting and seminar rooms and study areas.

Taylor’s administration, from 1972 to 1980, was marked by improvements to the University’s libraries, the expansion of its endowments and enhancement of intra-University cooperation among schools. A major renovation to Wilson Library and an expansion of the Health Sciences Library were completed. Later in his administration, he was influential in securing the funding to build Walter Royal Davis Library.

Taylor worked toward significant increases in diversity among faculty, students and staff. He organized the Order of the Tar Heel One Hundred, now known as the Board of Visitors, to educate state leaders about the University.

Taylor, who also taught at the UNC School of Law until his retirement in 1991, received the Frederick B. McCall Award for Teaching Excellence from the UNC graduating class in 1983. In recognition of his leadership and commitment to the revitalization of the University’s honor code, the class of 1982 created an award in his name that is given annually to a senior judged to have made the greatest contribution to the vitality and strength of the honor code in the community.

Taylor served on the board of the UNC General Alumni Association, which honored him with its Distinguished Service Medal in 1988. He also received the William R. Davie Award, the highest honor given by the UNC Board of Trustees, for extraordinary service to the University or to society. Taylor died in Chapel Hill in February 2004.