Kevin Thomas ’12 had come to another career crossroads. The rap artist and entrepreneur, who goes by “Kaze” (KAH-zee), had launched his VibeHouse405 studio in Chapel Hill just a few months earlier. Then the COVID-19...

On the Road in the Pandemic

Michelle Fishburne ’84 is quick to point out that, although she spent six months crisscrossing the United States collecting oral histories, she’s not an oral historian. She just wanted to chronicle how people were making...

From No. 1 to  Persona Non Grata : A Peace Corps Story

Stopped in His Tracks, But Not Silenced 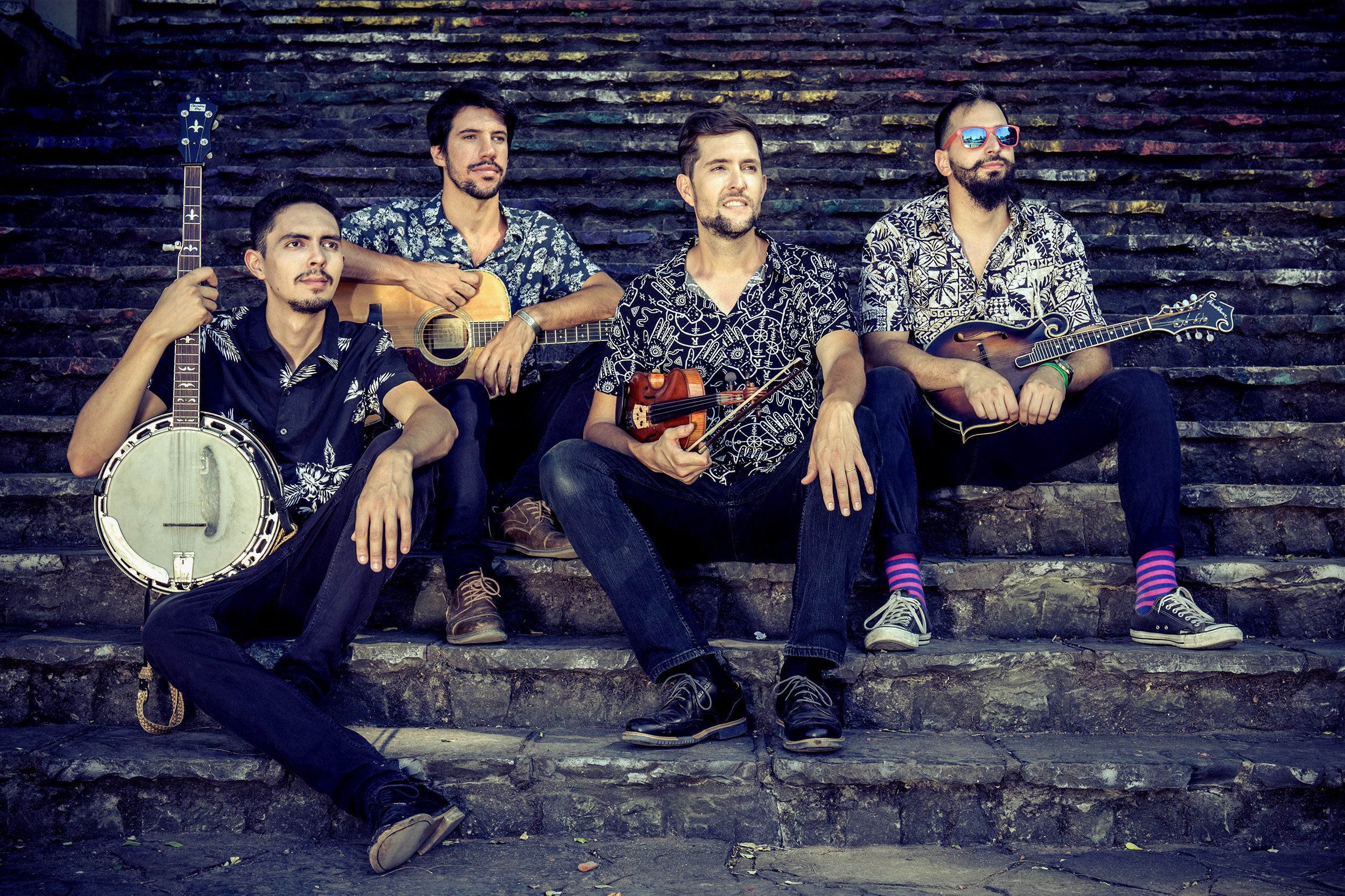 Joe Troop ’05 and his band were on the cusp of a breakthrough year at the beginning of 2020. The Buenos Aires-based “Latingrass” quartet Che Apalache — with musicians from Argentina, Mexico and the U.S. — had picked up its first Grammy nomination, in the Best Folk Album category, for Rearrange My Heart, produced by banjo legend Bela Fleck. Even though Che Apalache didn’t win, the exposure primed the group for playing the major music festivals with another album on the way.

Then the COVID-19 pandemic shut down the entire music business.

“For me, 2020 was incredible, exhausting, horrifying, annoying, wonderful — everything,” Troop said. “But I think I’m the kind of person who was made for pandemics, in a way. I’m used to changing, moving around a lot, having to reinvent myself. … The word of the year was ‘pivot,’ and I did.” 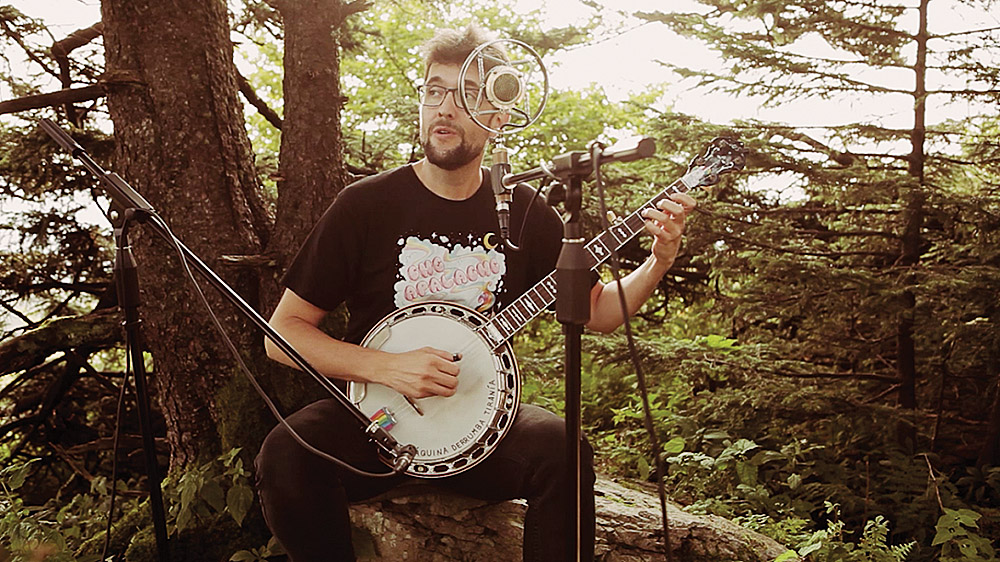 “I think I’m the kind of person who was made for pandemics, in a way,” said Troop. “I’m used to changing, moving around a lot, having to reinvent myself. … The word of the year was ‘pivot,’ and I did.” (Contributed photo)

Part of that reinvention was greater political involvement; the gay fiddle and banjo player made videos for Queer Appalachia and the Pickin’ for Progress get-out-the-vote activist movement. Those activities complemented Rearrange My Heart, a polyglot album with lyrics in Japanese and Spanish as well as English, and songs steeped in issues such as immigration.

Troop fell in love with bluegrass music growing up in Winston-Salem and the foothills of North Carolina. The Spanish major studied in Spain, where he met musicians from Argentina; he moved to that country in 2010, taught music for a living and founded Che Apalache with three of his best students: Pau Barjau (banjo), Franco Martino (guitar) and Martin Bobrik (mandolin). (“Che” is a common term in Argentina for “buddy”; Apalache refers to the nearby mountains of his youth.)

The band describes its music as blending folk songs — as well as classical, gospel and others from around the world — with Latin beats as ranging “from Appalachia to the Andes,” creating a style that can stick to traditional mountain tunes or conjure up a tango with a banjo and a mandolin.

The band was on tour headed for Indiana when the pandemic canceled everything, bringing on what Troop described as “an economic disaster.” His bandmates made their way back to Argentina and Mexico; Troop stayed in North Carolina — first in Asheville, then in his van and for now in a friend’s guest house in Stokes County.

The Review asked Troop why he opted to stay in N.C., living an itinerant life.

That was a split-second decision that wound up being longer-term than I thought it might. … I had just left Buenos Aires, moved out in a separation. I was going to be going back there on May 1, which was when I had a place there to stay. Until then, I wanted to be near my brother in Asheville, and my friend [singer-songwriter-musician] Anya Hinkle had a guesthouse there I could stay in. So, it made sense, but then the pandemic dragged on. … It wasn’t so much resolving to move back to North Carolina; it was that going back to a big city without a place to stay in the middle of a pandemic seemed like a bad idea. Also, being in a place where I could walk in the woods every day was appealing.

Since touring isn’t possible, what have you been doing?

I’ve kind of turned into the Anthony Bourdain of the social-justice movement, doing these videos. It started with one in defense of the U.S. Postal Service, which went … viral, and I worked on building up the VoteNC.org coalition. I was also commissioned to do a Pickin’ for Progress video series on progressive voices across the state, trying to get more rural progressives out to vote.

Is the band going to survive this enforced separation? 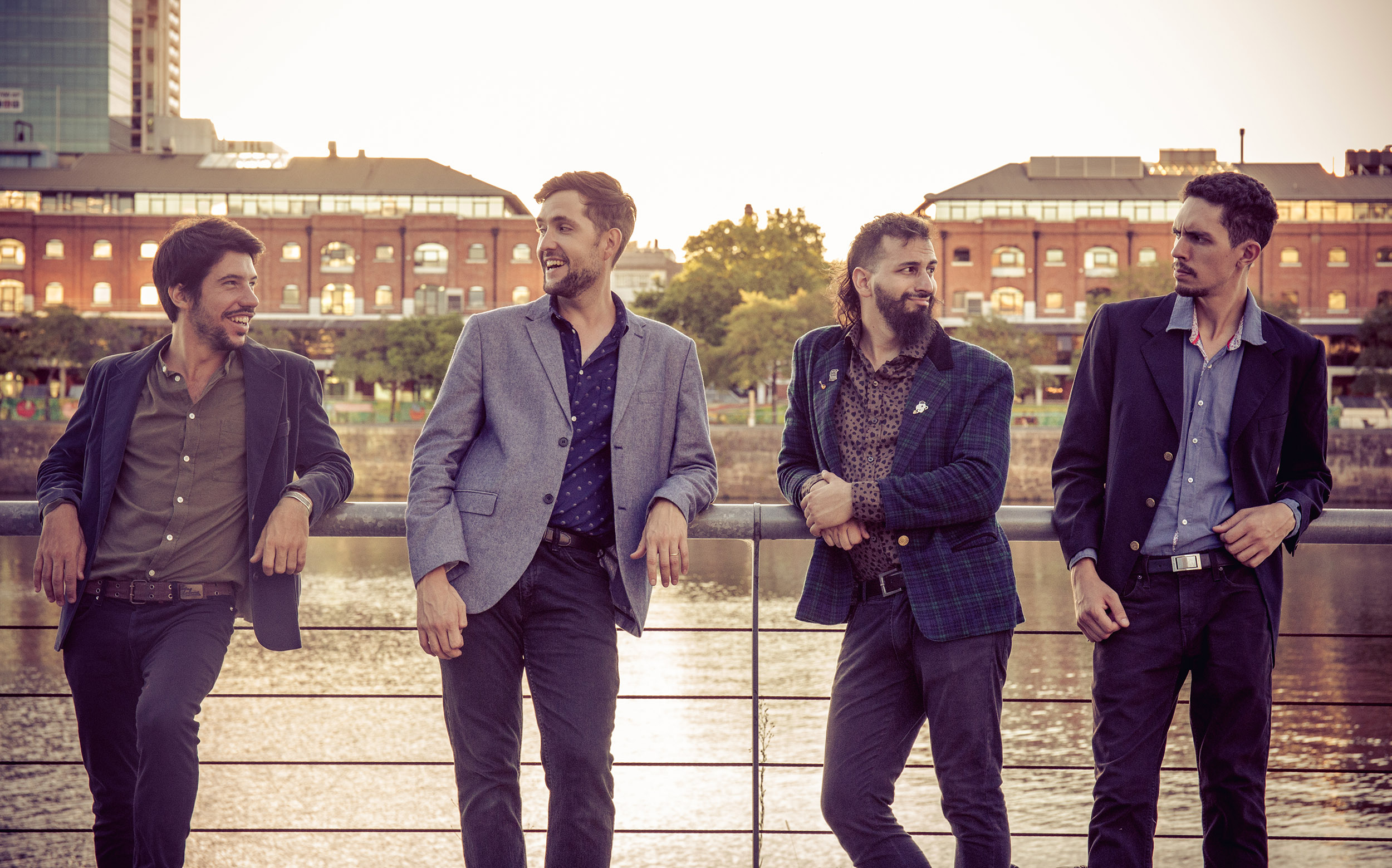 “If we can go back out in 2022, we’ll have to rebuild because so many of the places we used to play are out of business, like after a tsunami … so it won’t be quick.” (Contributed photo)

I hope so. A lot will depend on the success of the vaccines. The music industry is in a shambles, and it’s unlikely we’ll be on the road in 2021, especially as an international band. And

There was another Che Apalache record in the works. What’s the status of that?

Well, that’s on the back burner for now. I’ve actually been gearing up to make a solo record. Through this whole thing, my coping mechanism was writing, so I wrote and wrote and wrote. Life is chaotic, and the only thing that’s not chaotic is to grab my instrument, play and sing through anxiety, tears, elation, confusion. I’ve been just hemorrhaging out material this year.

What similarities between traditional bluegrass and Latin music make them work together, lend themselves to a combination like this?

There really aren’t too many similarities, other than there are string traditions in both. So you can find some common ground there. Both have some portability, played on instruments you can lug around into nooks, crannies, alleyways and bars, so there’s a spirit of music that can be made anywhere at any given moment. But the biggest similarities of all are impossible to articulate in words. All traditional musics throughout the world have an X factor that may not seem readily evident. If you know two traditions well and have experienced the cultures and gatherings they’re associated with, you can authentically craft a fusion without it being total cheeseball. The cheeseball attempts come from people who don’t understand one tradition or the other, or either.

Did UNC contribute to your journey?

It was very important to my development. My two middle years in a foreign-exchange program in Seville, Spain, were incredibly important. Those were my formative years in becoming a worldly person, and I connected with the musicians who eventually brought me to Argentina. I had some amazing teachers at UNC, too, like Yuko Kato [teaching associate professor of Japanese], who helped me with the pronunciation for the song in Japanese on the album. And one of the most important things was that being at UNC was a safe space to come out as gay at 19. Chapel Hill was way better than Winston-Salem for that. UNC allowed me to go in a lot of different directions with a very multifaceted education.

Even though you didn’t win that Grammy last year, did getting nominated feel like validation?

It did. I guess all humans need validation at some point, even if it brings a lot of other things into question — like why there is a need for validation! But it certainly opened tons of doors in the music business and media. It’s cool to have more of a platform, feel like you’re taken with more legitimacy. It’s a privilege and an honor, sure. At the same time, I’m very cognizant of the fact that lots of people who deserve that platform never get one. So we’re taking it with a grain of salt. It’s a blessing, but we’re sticking to our guns.