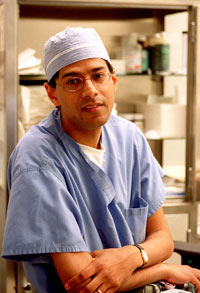 “His remarkable career as a distinguished surgeon, writer and researcher is inspiring,” said Chancellor Carol Folt. “He is changing the future of medicine while also serving the public good.”

Gawande practices general and endocrine surgery at Brigham and Women’s Hospital in Boston. He is a professor in the department of health policy and management at the Harvard School of Public Health and professor of surgery at Harvard Medical School.

An accomplished surgeon, a writer and a popular and dynamic speaker, Gawande offers audiences a unique perspective on the practice of medicine. He encourages incremental reforms that build on the strengths and limitations of the current health care system and speaks on how to improve care and lower costs. He is the lead adviser for the World Health Organization’s Safe Surgery Saves Lives Program and is the founder and chairman of Lifebox, an international not-for-profit organization that implements systems and technologies to reduce surgical deaths globally.

Gawande, who has been a staff writer for The New Yorker magazine since 1988, has written three best-selling books. His most recent, The Checklist Manifesto: How to Get Things Right, shows how even a simple five-point checklist can reduce up to two-thirds of intensive-care unit infections. He suggests that as modern medicine — and the modern world — become increasingly complex, the proper response is ever-simpler measures. He has won the AcademyHealth’s Impact Award for highest research impact on health care and was named one of the world’s 100 most influential thinkers by Foreign Policy and Time magazines. In 2006, he was named a MacArthur Fellow for his writing and efforts to improve surgical practices and medical ethics.

In 2012, Gawande founded Ariadne Labs, a joint center for health systems innovation run through Harvard and the Brigham and Women’s Hospital. The center aims to create more efficient, higher quality health care while simplifying the whole system. He graduated from Stanford University in 1987 before becoming a Rhodes Scholar, earning a degree in philosophy, politics and economics from Oxford.

After Oxford, he embarked on a brief political career before obtaining his medical and master’s of public health degrees from Harvard.

Gawande was selected in consultation with the University’s Commencement Speaker Selection Committee, which includes students and faculty. He also will receive an honorary doctor of science degree.

Commencement exercises are scheduled for May 11 at 9:30 a.m. in Kenan Stadium.