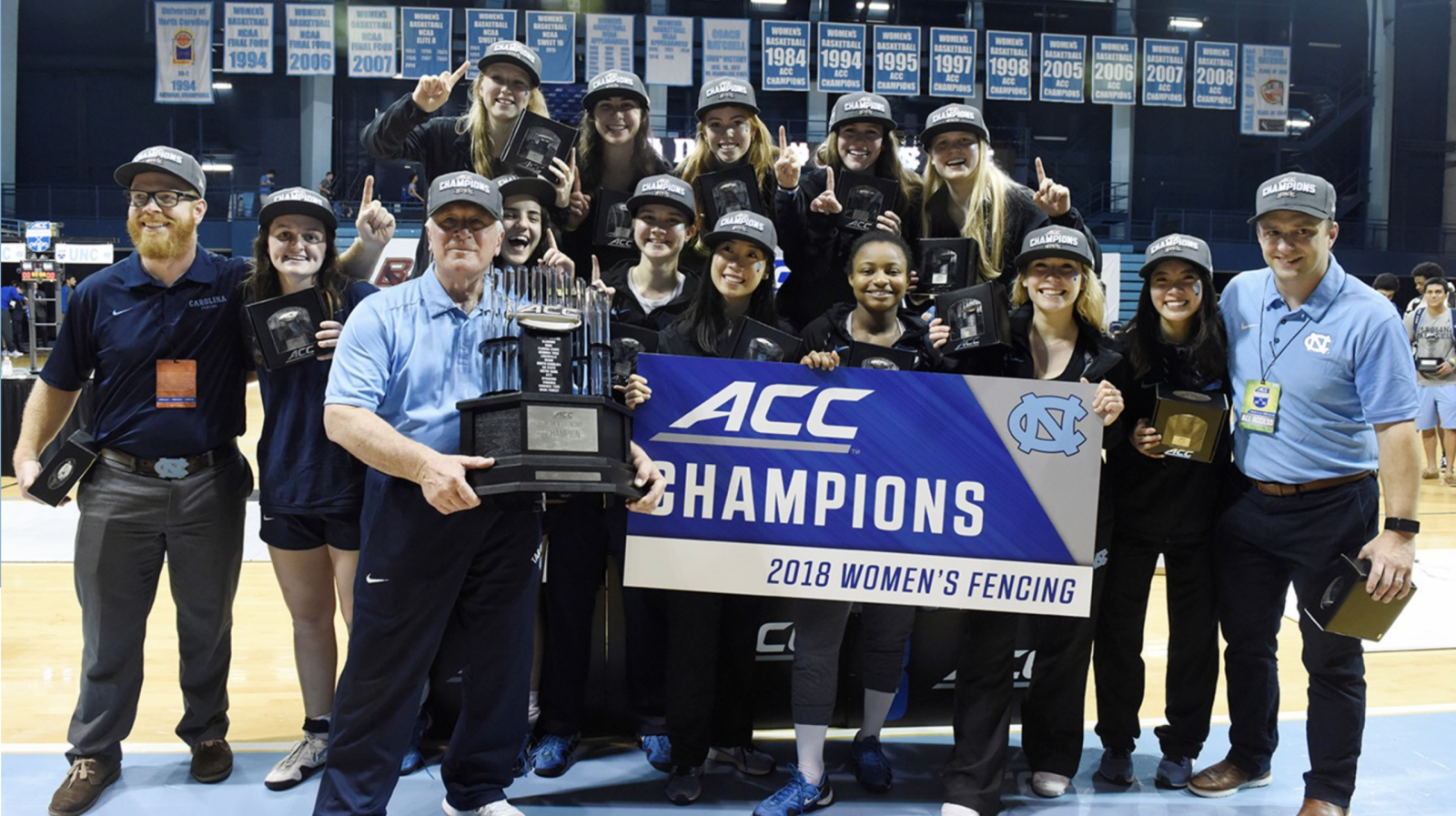 Carolina pullied off an epic upset by beating Duke for the first time since 2015 and then winning fence-offs against the Blue Devils and defending NCAA champion Notre Dame. (UNC Athletics photo by Alex Kormann)

Carolina has claimed the first Atlantic Coast Conference championship in the history of the women’s fencing program, pulling off an epic upset by beating Duke for the first time since 2015 and then winning fence-offs against the Blue Devils and Notre Dame, the defending NCAA champion and winner of the three previous ACC titles.

Few would have guessed that as the weekend of fencing wrapped up it would be the third-seeded Tar Heels celebrating on the Carmichael Arena court.

“I don’t know that it was improbable,” UNC coach Ron Miller ’76 (PhD) said of the victory. “I think it was not expected, and there’s a difference. Coming in, we felt comfortable that we would come out with a minimum of third place, possibly second and maybe, maybe first.”

Miller, now in his 51st season as the Tar Heels’ coach, was the only individual in the program who had ever experienced an ACC championship. While it’s the first title for the women’s program, it’s the ninth for him, with the other eight coming long before any of his current fencers were born. He coached UNC to eight men’s titles between 1971 and 1980; subsequently, as several ACC schools dropped fencing, it ceased to be a conference sport.

That changed in 2015, when the championship was revived with four teams: UNC, Duke, Notre Dame and Boston College. Since then, Notre Dame has swept the men’s and women’s crowns each year. Duke pulled the upset on Feb. 24 to take the 2018 men’s title.

When the Tar Heels beat No. 10 Duke to kick off the women’s team competition on the afternoon of Feb. 25, it looked as if that would be the highlight of the day — and perhaps the season — for Carolina. The Blue Devils had won six in a row.

With a victory within reach and UNC just a point from clinching, sitting at 13-11, junior Sydney Persing trailed 3-0 in her foil bout against a competitor she’d never beaten. “Statistically, it’s really unlikely to win like that,” Persing said. “But I really do think the whole day is about belief.”

She went on to win the bout 4-3 in overtime, setting off a celebration among her teammates. “To see that light go off in overtime and have my team jump on me was the best feeling,” Persing said. “I didn’t think we would top that feeling today, but we did.”

The Tar Heels fell to Notre Dame, and then Duke pulled off an upset over the defending champions to leave the three schools all tied at 2-1 for the day, with each also beating fourth-seeded Boston College. To break the tie, the teams would each pick one fencer per weapon to compete in best two-out-of-three five-touch bouts. As the top seed, Notre Dame got a first-round bye, so UNC and Duke faced off, with the winner to take on the Irish. “Of the three, we were the clear least-favorite,” Persing said.

Junior Matthew Garrelick had UNC’s best finish in the men’s individual competition, fourth in sabre. Garrelick, who reached the 2016 NCAA championships as a freshman, won nine bouts in round-robin competition to advance to the semifinals as the No. 4 seed. He faced top-seeded Pascual DiTella of Duke and fell 15-10. In the bronze medal match, Garrelick lost 15-8 to Notre Dame’s Jonathan Fitzgerald, meaning no Tar Heels on the podium.

“This is such a big win for our program and for Coach Miller,” Pershing said. “There is no better gift we could have given this man.”