The Best and Worst of Times

From the University Report (published by the GAA 1970-94)

“It was the best of times; it was the worst of times.”
— Charles Dickens, A Tale of Two Cities

There is a natural tendency amidst the beauty of Chapel Hill for one’s assessment of “the state of the University” to be overwhelmingly positive. There is much to support such enthusiasm. Our faculty continue to give the individual attention that serves to challenge today’s students. These same faculty deliver unequaled service to North Carolina while maintaining internationally authenticated research and scholarship.

There are key indicators that suggest that Carolina, as we approach our bicentennial, is thriving. The accompanying tables show that by reviewing the number of students applying for admission and the increase in average SAT scores, it is clear that students continue to find the University of North Carolina very appealing. In the past decade there has been a 41-percent increase in the number of students applying for admission to the freshman class (see the table” Undergraduate Admissions, All Applicants”) . Consequently, the quality of each entering freshman class, as measured by SAT scores, continues to increase. (Our Undergraduate Admissions office ranks SAT scores as the fourth most important factor in determining admission.) From 1981 to 1992, the median SAT score has increased by 69 points.

Our distinguished faculty continue to be remarkably prolific in scholar 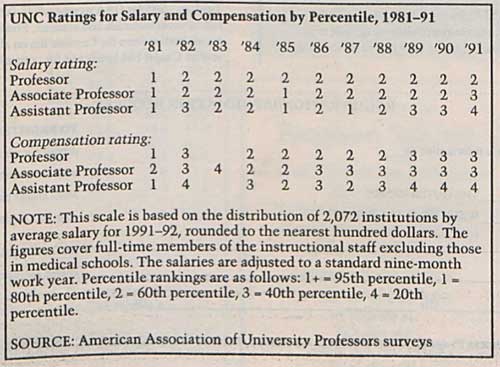 ship and research while maintaining their unique commitment to teaching and public service. The chart titled “Sponsored Funding at UNC” (on page 5) shows the proliferation of externally funded research grants awarded through competitive peer review. This total now exceeds $200 million and represents a 278-percent increase in the past decade.

In these pressing times, our students and alumni are contributing even greater personal funds. In the past five years, tuition has increased 44 percent, and alumni-giving by individuals and organizations has increased 53 percent. 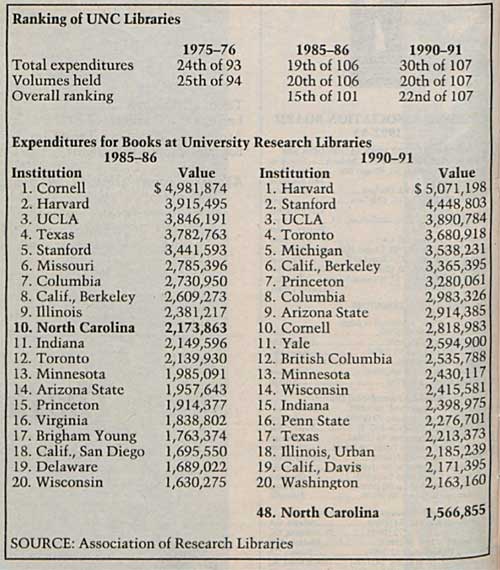 In evaluating colleges and universities, it is customary to review the quality and ranking of research libraries and the salaries and compensation of faculty. In each of these areas, the news is not encouraging. Indeed, it is alarming.

Please refer to the table on page 5 titled “Faculty Salaries in the Top 30 PhD-Granting Institutions,” which I shared with you just four years ago. It shows the ranking of the nation’s top 30 doctorate-granting colleges and universities as determined by the National Academy of Sciences in their last survey, released in 1982. Not a magazine survey, this is the most authoritative assessment of faculty quality. This table also includes comparative faculty salary data for 1987-88 and 1991-92 from the annual survey of the American Association of University Professors. Clearly, Carolina is losing ground to its competition. Whereas four years ago there were a dozen colleges and universities among the top 30 whose assistant professors’ annual salary was below that of UNC’s, there is now not a single one.

And whereas 10 years ago we were in the top quintile — that is, the top 20 percent — both in faculty salaries at the full-, associate- and assistant-professor level as well as for total compensation (except for associate professors), we have now dropped to the 40th and 20th percentiles (except for full professors’ salaries). This trend is distressing. It is one that should concern all North Carolinians and especially those of us who care most deeply about our University.

Furthermore, additional tables show that our library is also suffering, as measured both by its national ranking and by its purchases of new books. With a declining library and the declining competitiveness of faculty salaries and compensation, our national ranking as a university — earned through decades of hard work by faculty, staff, students and alumni and the generous sacrifice by N.C. taxpayers — is in jeopardy.

I share this distressing news with you not to be an alarmist but out of concern that until or unless we all have a common understanding as to where we stand, we cannot begin to adequately shape policy changes that can arrest this decline and move us toward the restoration of North Carolina’s most prized human-made creation, the University of North Carolina.

Is ours still a great University? Absolutely! Is it a University whose excellence is threatened? Regrettably, yes.

In the coming weeks, all of us should give thought as to how we can correct this decline-how do we provide more competitive faculty salaries and compensation, and how do we reverse the decline of our libraries? In seeking answers, let us not dwell on the past but on the future. Let us not look for villains to blame but visionaries to lead. If the nation’s oldest public university is also to be the best, then each of us has an important role to play in shaping Carolina’s future. 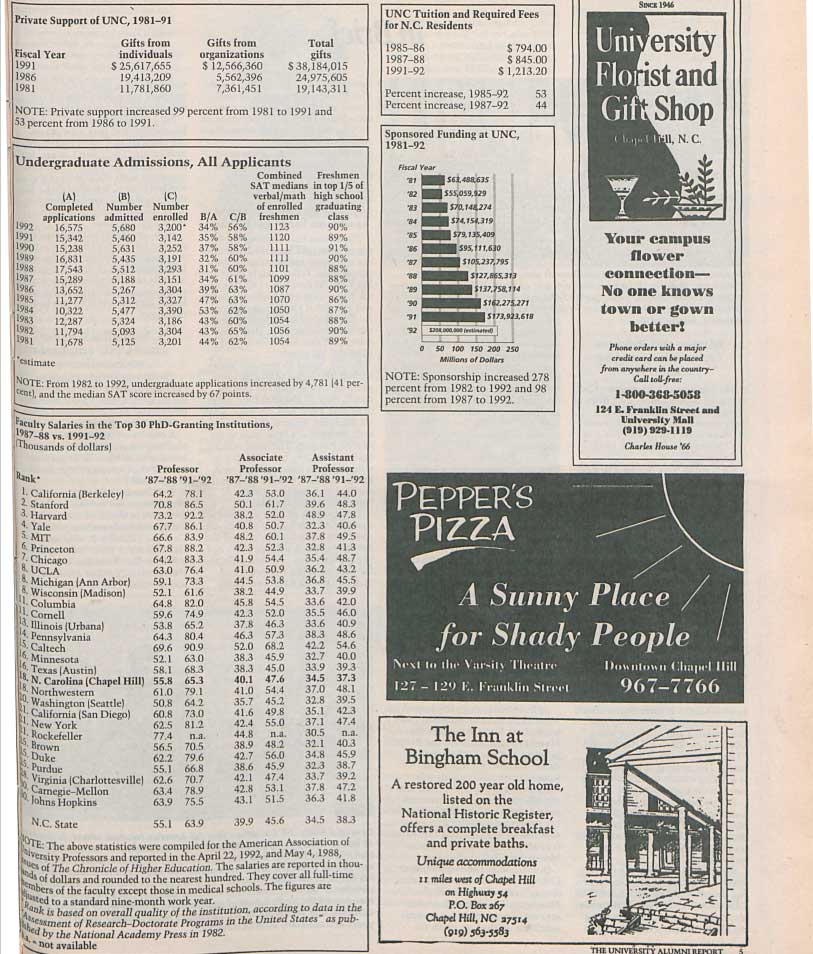