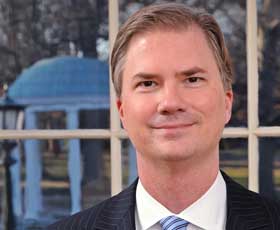 Outgoing Chancellor Holden Thorp ’86 has been honored with the establishment of an endowment at the Carolina Center for Public Service to name and support the center’s Faculty Engaged Scholars program.

The program is designed to support faculty from across campus in their efforts to develop and strengthen their teaching and research in ways that benefit communities throughout North Carolina, the nation and the world.

The Chancellor Holden Thorp Faculty Engaged Scholars Endowment was created with a $1 million gift from an anonymous donor.

Thorp has served on the faculty since 1993. Before becoming chancellor five years ago, he had been dean of the College of Arts and Sciences, director of the Morehead Planetarium and Science Center and chair of the chemistry department. He is stepping down in June to become provost at Washington University in St. Louis.

“I can’t imagine something that would mean more to me than being part of an extraordinary legacy of public service at this university,” Thorp said. “[Through the Faculty Engaged Scholars program], it is nice to see public service and applied research come together in ways beyond anything we could have imagined. That is inspiring to me, and I am honored to be a part of it.”

After being selected through a competitive process, program scholars spend two years participating in an interactive and experiential curriculum, involving on-site visits and discussions with other faculty members and community partners.

The program began in 2007; the fourth class of scholars was selected last spring. A total of 33 faculty members representing 21 departments have participated in the program. The next class of scholars, to be selected in spring 2014, will be the first to graduate as Thorp Faculty Engaged Scholars.

The Center for Public Service also honored several other individuals and groups for service this year, including for engaging young girls in healthy lifestyles, promoting interventions against interpersonal and relationship violence and addressing the critical need for clean water:

The center also presented three Office of the Provost Engaged Scholarship Awards, which honor individuals and campus units for service through teaching, research and partnerships:

The Ronald W. Hyatt Rotary Public Service Award, named for the late professor of exercise and sport science and longtime member of the Chapel Hill Rotary Club, honors innovative public service projects that represent the “service above self” motto of Rotary International. This year’s award went to A Drink For Tomorrow in recognition of its work to raise funds and awareness for the global water crisis through Las Cocas Sustainable Water Project in Peru.

Compassionate Labor in Liberia received the Davis Projects for Peace Award, funded by philanthropist Kathryn W. Davis. The award provides $10,000 for a project developed by Madiha Bhatti of High Point, a junior majoring in English and biology, and Danielle Bulinski of Hilliard, Ohio, a senior majoring in religious studies. Their project will address high rates of maternal mortality, mistrust among residents and a lack of confidence in medical establishments through a health care model that empowers women, builds relationships and facilitates trust in health care.

Five undergraduates received a 2013 Robert E. Bryan Social Innovation Fellowship, with up to $1,500 to launch a project and participate in a special public policy course. Four Community Engagement Fellowship awards of up to $2,000 went to selected graduate students to develop and implement engagement or engaged scholarship projects that employ innovative, sustainable approaches to complex social needs and have an academic connection. The center also recognized the 13 recipients of full scholarships for N.C. Outward Bound School for a 28-day course.