Time Out With the Score: 40 Years and Done for Durham 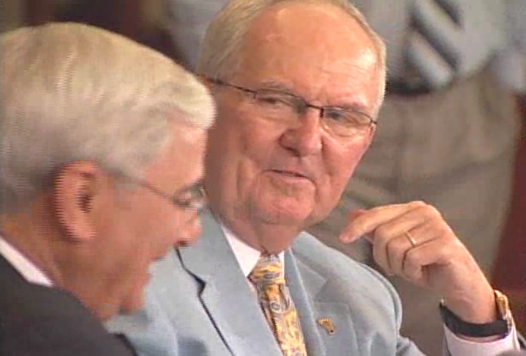 Woody Durham ’63 was introduced by Dick Baddour at his retirement announcement.

Woody Durham ’63 is retiring after 40 years as the play-by-play announcer for Carolina basketball and football.

The “Voice of the Tar Heels” has called play-by-play on more than 1,800 football and men’s basketball broadcasts on the Tar Heel Sports Network since 1971.

He made the news official at a morning news conference.

“Forty years is an incredible career,” Eric Montross ’94, Durham’s current basketball color commentator, told The News & Observer of Raleigh. “For anyone to do something for so long and so well … he will be missed, because he’s such a staple of Carolina athletics, and he’s so good at what he does.”

Adam Lucas ’03, who writes for tarheelblue.com and is executive publisher of Tar Heel Monthly, said the players aren’t the only targets of autograph seekers at Carolina games.

“The reception he gets walking through a crowd is remarkable,” Lucas wrote Tuesday. “Everyone wants to shake his hand. Most want to tell him about their favorite call. Some want autographs (don’t worry, he’s got a Sharpie). Some want a picture. Everybody, it seems, wants something. After all, this is the man who has been in their living room for decades.

“It is not unusual to see him seated on press row before a basketball game — hours before a game, because he’s always there more than two hours before tip-off — next to Eric Montross. It’s hard to hide seven feet, and Montross is a Carolina legend who has his jersey in the Smith Center rafters. So it’s very obvious that one of the men is Carolina royalty, and Montross does get more than his share of autograph requests in that scenario.

“But almost always, at some point a fan will approach, ignore Montross, and shout, ‘Woody!’ And Woody will smile and sign. Getting close to the players seems impossible. They’re wearing the uniform, something we know we’ll never do.

“But we could be Woody, couldn’t we?”

He also is a recipient of the UNC trustees’ William R. Davie Award, the Skeeter Francis Award for special service to the Atlantic Coast Conference, the Lindsey Nelson Outstanding Sportscaster Award from the All-American Football Foundation and the Russell Blunt Legends Award from the N.C. High School Athletic Association for being a true legend in athletics.

“Woody Durham is so prepared, I think he can tell you what every player ate for breakfast — and not just the home team,” Montross said. “You can’t throw Woody a curve ball in a broadcast, because he’s going to know the answer.”

He has called UNC games for six head coaches in football and four head coaches in men’s basketball in addition to working with head coaches and assistant coaches from all of UNC’s sports on Rams Club tours and as master of ceremonies at many other speaking engagements. He worked with directors of athletics Homer Rice, Bill Cobey, John Swofford ’71 and Dick Baddour ’66.