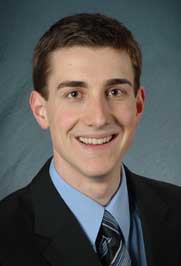 Christopher Sopher, a junior Morehead-Cain Scholar, has been awarded the distinguished Truman Scholarship, worth up to $30,000 for graduate studies toward a public service-related degree.

Sopher, of Virginia, is a double major in public policy and political science. He hopes to use the award to complete a joint law and public policy master’s degree program at Harvard’s Kennedy School of Government and law school. His focus will be on the news media, politics and public policy.

Sopher says he ultimately wants to specialize in education policy at the federal level with the goal of helping new approaches that make school relevant and engaging for more students.

“Education is the silver bullet,” he said. “It can power democracy, foster freedom where none exists and sustain it where it does. But to do so it must connect with students’ lives and to the community — and there are many promising ideas for how to achieve this.”

“Chris is a wonderful example of a Carolina student who has made the most of the opportunities available to undergraduates,” said Chancellor Holden Thorp ’86. “We wish Chris all the best in taking what he learns as a Truman Scholar and applying that knowledge to the noble goal of improving public education in America.”

Congress created the Truman Scholarship Foundation in 1975 as the official federal memorial to the nation’s 33rd president. The foundation recognizes college juniors with exceptional leadership potential who are committed to careers in government, the nonprofit or advocacy sectors, or education or elsewhere in public service.

Besides funding, scholars receive priority admission and supplemental financial aid for graduate study, leadership training, career and graduate school counseling and internship opportunities in the federal government. Recipients must be U.S. citizens, have outstanding leadership potential and communication skills and be in the top quarter of their class.

Sopher said UNC’s emphasis on public service influences students who lean toward careers in that arena. “I’ve visited a few other schools and not seen the same sort of dedication to helping others and building communities that exists here, and it’s made all the difference.”

Of 32 Truman Scholars from UNC since the program began in 1977, 19 have been Morehead-Cain Scholars.

At Carolina, Sopher has worked as a writer and multimedia editor at The Daily Tar Heel. He was a founding vice president of Strive for College, a national nonprofit organization that starts local chapters of college students to mentor qualified low-income high school students through the college application process. Sopher also is active with the Carolina Young Democrats and worked in the Obama campaign in 2008.

Sopher said that W. Hodding Carter III, UNC professor of leadership and public policy, had significantly influenced his direction in life. “I would also like to thank staff at the Morehead-Cain Foundation and the Office of Distinguished Scholarships for all their support. This University has an incredible environment that is about much more than just going to class.”