Two Arrests May Be Last in Agent Inducement Scandal 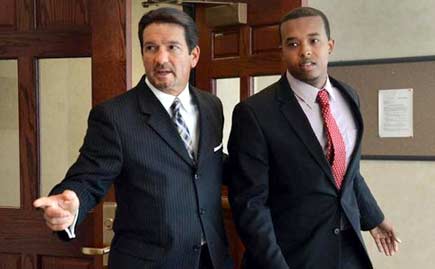 Authorities have arrested two more people they say helped orchestrate a scheme to induce UNC football players into signing potentially lucrative sports contracts — apparently the last to be charged as part of a landmark state investigation, according to recently unsealed indictments and media reports.

The arrests bring to five the number of suspects charged as a result of an investigation by the state secretary of state’s office that lifted a veil on what are sometimes criticized as cozy relationships between agents and athletes. Orange County District Attorney James Woodall ’82 said the indictments unsealed Wednesday against Johnson and Barley likely would be the last produced by the state’s investigation, according to The Associated Press.

Johnson, 25, a former quarterback at N.C. Central University, is charged with three counts of athlete-agent inducement. The indictments allege he provided Watson with a location to meet Little and give him $5,000 in May 2010.

Johnson also twice gave an address to Watson so he could send packages to Little containing $100 in May and June of that year, according to the indictments.

Johnson’s attorney, William D. Young IV, was quoted by The AP as saying his client was “an extraordinary student-athlete and dedicated lifelong friend of Greg’s” but had no relationship to Watson.

Barley, 29, of North Chesterfield, Va., is listed on the arrest order as Watson’s employee.

He is charged with four counts of athlete-agent inducement, including giving Quinn $1,525.74 in May 2010 for a hotel room in Miami and two round-trip airline tickets to Florida. He also gave Quinn the use of a car for two days, according to the indictments.

Watson was arrested in October on 13 counts of athlete-agent inducement and one count of obstruction of justice, the most charges leveled against any of the five suspects.

Authorities say Watson gave Quinn, Little and Marvin Austin ’12 cash, airline tickets and hotels rooms, illegal benefits that totaled more than $20,000. All three players were dismissed from the Carolina football program in 2010 for illegal dealings with sports agents. They all now play in the NFL.

Patrick Mitchell Jones, a Georgia-based real estate agent and friend of Watson’s, also was charged with wrongdoing in trying to get Quinn to sign.

Jennifer Wiley Thompson ’09, a former tutor to athletes at UNC, also faces charges in the case. She is accused of giving Little two round-trip plane tickets to Florida, in part to enter a sports contract, and acting as a go-between for cash payments from Watson to Little.