Kevin Guskiewicz will be installed as 12th chancellor of the University on Sunday, Oct. 11, as part of a two-day University Day observance. The 3 p.m. installation will be an invitation-only ceremony due to COVID-19... 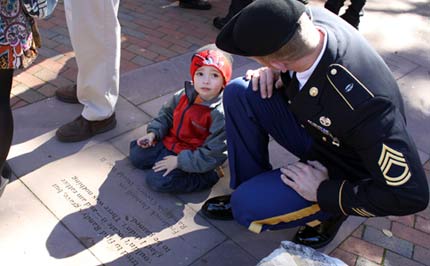 Under a brilliant blue sky and surrounded by the colors of autumn, several hundred people gathered at the Carolina Alumni Memorial in Memory of Those Lost in Military Service on Thursday for the campus’ annual Veterans Day ceremony.

ROTC cadets and midshipmen assembled in dress uniforms at 11 a.m. on the 11th day of the 11th month, a day first designated as Armistice Day to mark the peace signing by the Allies and the Germans in 1918 that ended World War I.

A color guard representing all three UNC ROTC programs – Army, Air Force and Naval/Marine – assembled at 10:40 a.m. before presenting the colors. Veterans were asked to stand and were recognized as the conflict in which they served is named.

This year’s speaker was retired Col. Bill Causey ’68, a Greensboro native who enlisted in the Army in 1969 and was a distinguished military graduate from Engineer Officer Candidate School the next year.

Causey also spoke at this service in 1995, two years after Carolina began holding the annual event.

“World War II was then 50 years in the past,” he noted. His father had attended that ceremony and, Causey added, he died a year later.

“Now Korea is 60 years ago,” and military veterans of the Vietnam War era are dying at a rate of 309 a day, Causey said.

He urged his audience to seize the present while appreciating the past: “You’ve got a mission,” he said. “Go out and find every veteran you can and thank them for their service.”

Causey served with the 173rd Airborne Brigade in Vietnam. He also was a parachute officer for the 82d Airborne Division and commander of the fifth Carolina Brigade, First Region, U.S. Army ROTC Cadet Command, responsible for Army ROTC activities in North and South Carolina. In addition to majoring in business at Carolina, he has two master’s degrees: in business from Chapman University and in national security and strategic studies from the Naval War College. He also completed the advanced management program in the Fuqua School of Business at Duke University.

Upon its dedication in 2007, the memorial honored alumni killed during wartime from the Civil War to the Gulf War. It was designed to allow addition of names not discovered in research for creating the memorial, as well as those lost later.

A list of Carolina alumni lost in war, with a biographical page for each of the 715 alumni who have died during wartime, is on the GAA website at alumni.unc.edu/veterans.

Army ROTC – the Tar Heel Battalion – sponsored this year’s ceremony, organized by 24-year veteran Master Sgt. Larry Thomas of Durham. Additional sponsors include the UNC College of Arts and Sciences and its curriculum in peace, war and defense.