The famous words are more than 100 years old now. In 1914, UNC President Edward Kidder Graham (class of 1898) expressed the University’s service goal: “We hope to make the campus co-extensive with the boundaries of the state.”

Stevens echoed the theme articulated by an assistant county manager in Cumberland County whose efforts to stem the local opioid crisis had stalled, an out-of-state student who needed an affordable ride home for fall break and the mayor of a coastal town threatened by climate change and rising sea levels.

They all came to Carolina’s 226th birthday celebration to talk about the life-changing help provided by the University’s people and the programs they run.

“We want our state to be a place where small towns and cities live side by side, working together and benefiting one another. We want the people of our state to live healthy, productive, secure lives. We want to prepare the next generation of leaders to build our state and ensure its continued growth.”

The pairing of three faculty speakers with people helped by Carolina underscored the University Day theme of service to the state. 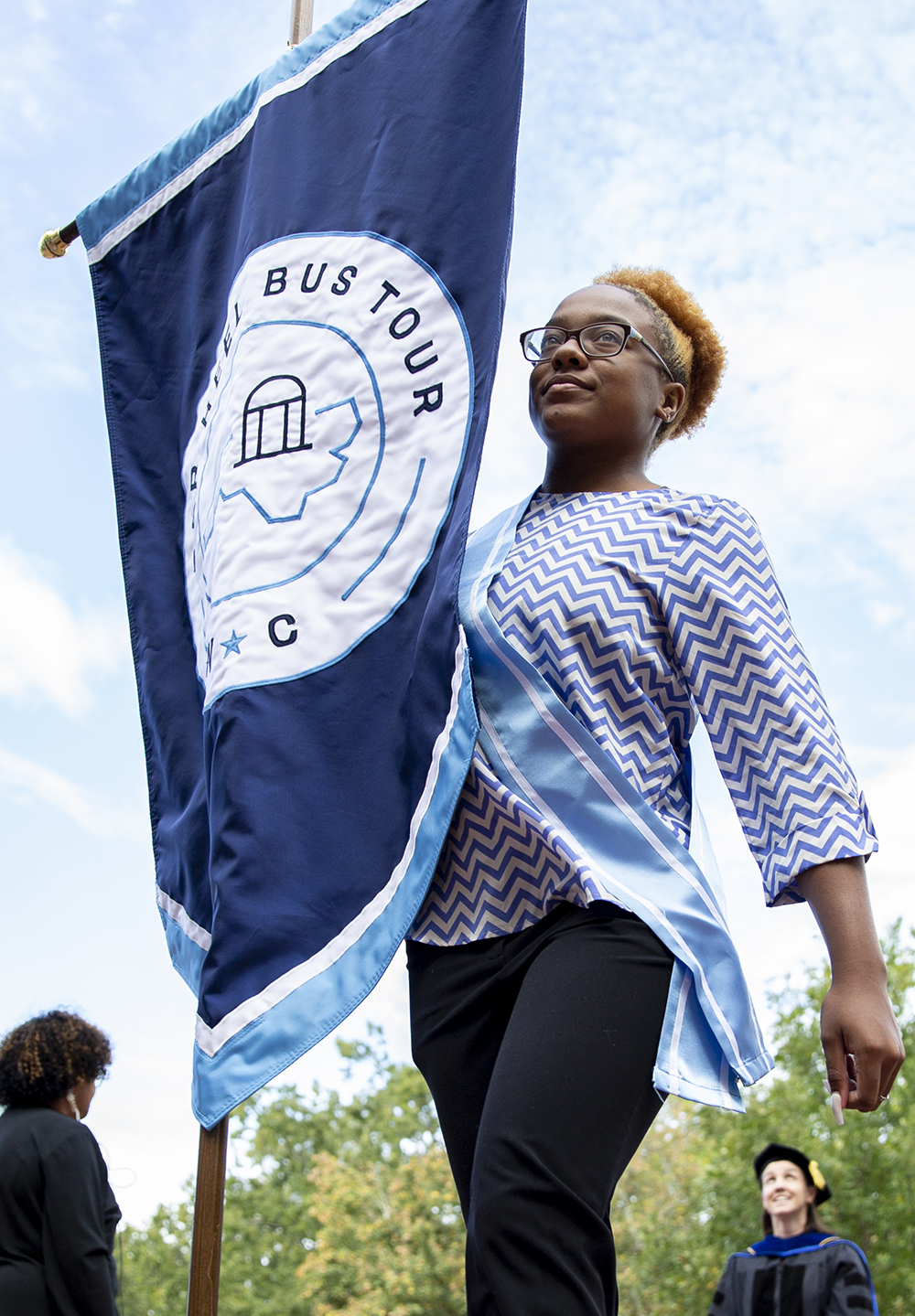 Rick Luettich, professor and director of the Institute of Marine Sciences, and his guest, Mayor Everette “Rett” Newton of Beaufort, spoke about how Carolina researchers have been working with that town to resolve water quality issues. Local officials also used Luettich’s storm surge models in real time during hurricanes Florence and Dorian to help with evacuations as well as search, rescue and recovery efforts.

Bernard Bell ’82 (’91 MBA), executive director of the Shuford Program in Entrepreneurship, introduced Nehemiah Stewart, a junior chemistry and math double major from Washington, D.C. When looking for a ride home to see friends and family and feast on his grandma’s cooking, Stewart came up with the idea of an Uber- or Lyft-style service matching drivers with riders. The Tar Heel twist that makes users feel safer is that all users must have a unc.edu email address. He pitched the Vector Rideshare app to Bell and, with the Shuford program’s help, launched his service, which he hopes to expand to other universities in North Carolina and beyond.

As it traditionally does on its birthday, the University also presented Distinguished Alumna and Alumnus Awards, which honor alumni who made an outstanding contribution to humanity. This year’s recipients were James E. Delany ’70 (’73 JD), commissioner of the Big 10 Conference; Nikole Hannah-Jones ’03 (MA), award-winning investigative reporter covering racial injustice for The New York Times Magazine; Jill C. McCorkle ’80, novelist and short-story writer; and Robert D. Newman ’83 (PhD), president and director of the National Humanities Center. Delany is a past chair of the GAA Board of Directors and Hannah-Jones and McCorkle have received its Distinguished Young Alumni award. 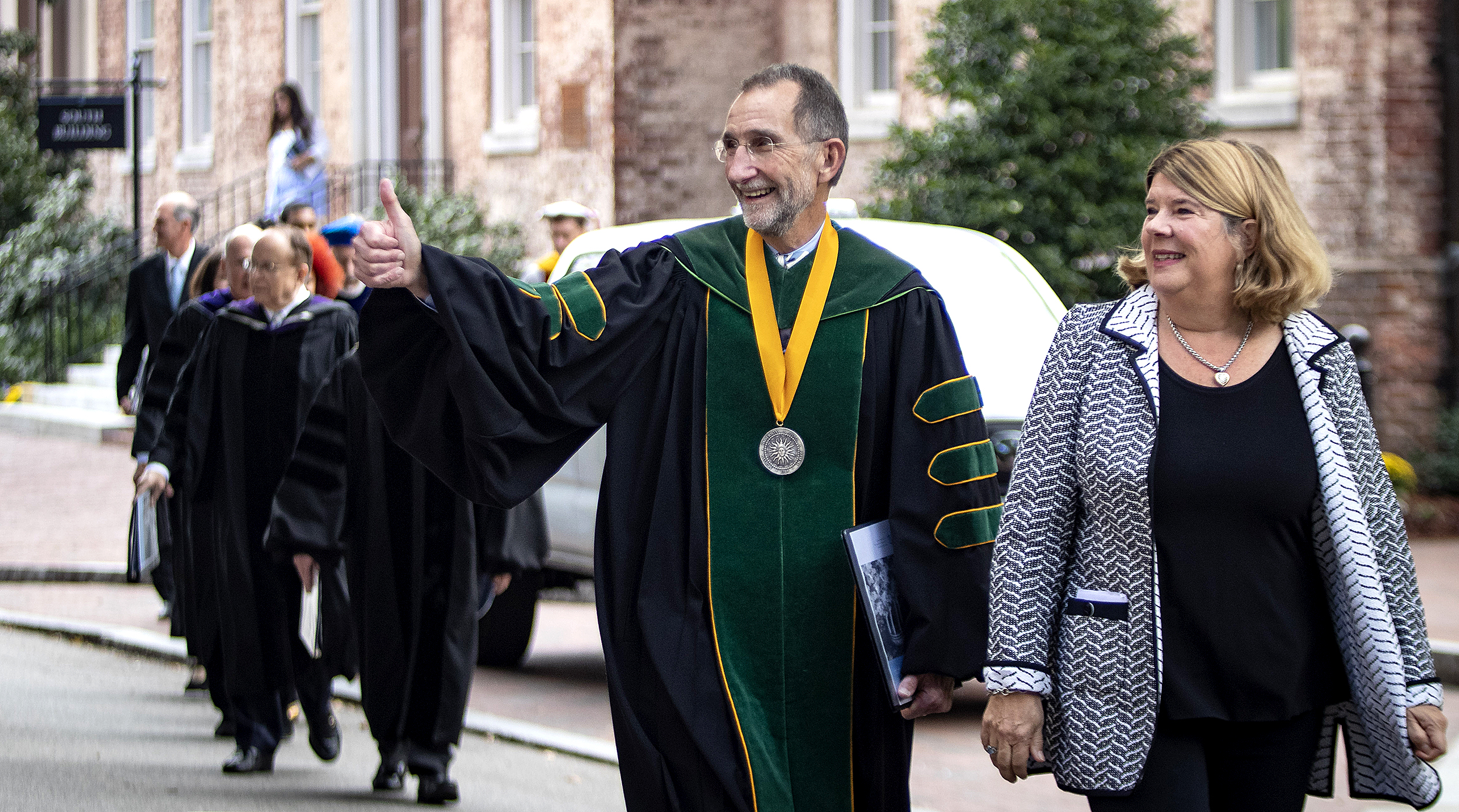 Giselle Corbie-Smith, Kenan Distinguished Professor of social medicine, director of the Center for Health Equity Research and professor of internal medicine in the School of Medicine, received the faculty service award named for Edward Kidder Graham.

“As we move forward together, we are re-committing ourselves to Edward Kidder Graham’s mission of service to our state and strengthening our partnerships with all North Carolinians,” Guskiewicz said in his closing remarks.

The chancellor ended the ceremony with a commitment to “spend the next year listening to our partners across the state,” starting with the Tar Heel Bus Tour over fall break. On the tour, 90 faculty and campus leaders will travel on buses to the southern, southeastern and western regions of the state.

“I charge you to listen to the people of our state and engage with the towns and communities our students call home,” he told bus tour participants in the audience. “I hope this tour will promote scholarship and service that responds to the concerns of the state and contributes to the common good. And I charge you to find ways to center our work around the needs of North Carolinians and live our mission, our ‘one reason’ as a public university.”