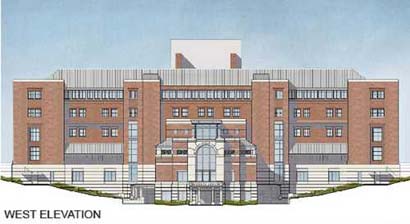 After years of talk, the next expansion of Kenan Stadium is off the ground with the UNC trustees’ approval this week.

Two floors will be added to the four-story Kenan Football Center on the stadium’s west end – one for team and recruiting space, and one for a club area and 16 to 20 private luxury boxes.

The work will start immediately after the 2008 season and is expected to be finished in time for the start of the next. The state has authorized $50 million in self-liquidating bonds, although the project is budgeted for $22 million. The bonds would be repaid with private donations and revenues from the boxes.

Preliminary plans for subsequent phases include a new press box, extensive renovations to the concourses on the north and south sides, a new academic support center for athletes, and a closing-in of the east end with additional general seating. More private box seating could be in the works as well and possibly new video boards.

The stadium currently seats 60,000. It and Duke’s Wallace Wade Stadium are the only ones in the Atlantic Coast Conference with no small private boxes.

Closing in the east end would necessitate tearing down the original Kenan Field House, which dates to the stadium’s construction, finished in 1927.