Williams at Odds With McCants' Story 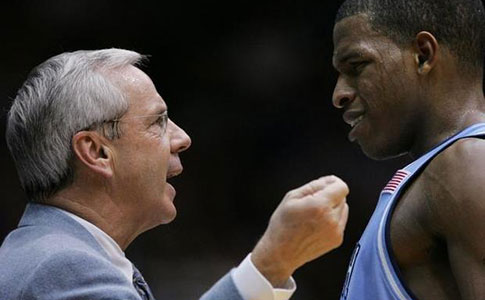 Basketball coach Roy Williams ’72 has rebutted most of what former player Rashad McCants said about him in an interview with ESPN last week.

In a separate interview with ESPN’s Jay Bilas on Saturday in Chapel Hill — held while some number of Williams’ former players sat in a side room as a show of support — Williams said he did not remember a meeting that McCants said the two had on the subject of his academic troubles in the fall 2004 semester. Williams said he was largely removed from his players’ academic situations, saying, “I don’t have control of the academic side.”

To McCants’ claim that tutors wrote his papers and those of some of his teammates, Williams said: “I have no idea. I don’t sit in the classroom. I don’t turn in their papers. But I find that impossible to believe.”

McCants, one of the stars of Carolina’s 2005 national basketball championship team, says that during his three years at UNC, he was steered to African and Afro-American studies classes that never met — and that that maneuver might have made the difference in his academic eligibility in the fall 2004 semester.

McCants said he believed Williams knew about the system of “paper classes” in the former department of African and Afro-American studies, also known as AFAM; the “paper classes” system has been acknowledged by the University administration over the course of several investigations.

On Thursday, the day McCants’ story was televised, Williams vehemently denied that he knew what McCants said he knew. “I strongly disagree with what Rashad has said,” Williams said. “In no way did I know about or do anything close to what he says, and I think the players whom I have coached over the years will agree with me.”

On Saturday, Bilas asked Williams to respond to the claim, and Williams said: “My first response is how does somebody else know what somebody believes. But I know what I believe. There’s some misconceptions, there’s some misunderstanding. When I heard the term ‘paper classes’ the first time, I thought that meant the class was on paper but it didn’t really exist. Then come to find out people are using that terminology ‘paper classes’ to signify independent study courses that you do papers.”

McCants told ESPN that he was named to the dean’s list in spring 2005 after receiving A’s in four classes, which he said he did not attend. He said tutors were writing his term papers.

ESPN said that it obtained McCants’ transcript for his time at UNC and that it indicates he received almost all excellent and good grades in AFAM studies and average to poor grades in others.

McCants said he rarely attended class in about half the time he was at Chapel Hill. McCants’ scheduled graduation date was 2006, but he left school after the spring of 2005 to pursue professional basketball. McCants played in the NBA for four seasons; more recently, he has played professionally in Europe.

Sixteen players from UNC’s 2005 team issued a statement Friday to The Associated Press that said they were proud of their accomplishments both on and off the court, that Williams and his staff operated with “the highest level of ethics and integrity” and that their experiences were not consistent with those McCants described. Also, some of Williams’ former players from Kansas, where he coached before coming to Carolina in 2003, commented over the weekend in his defense. No former player has stepped forward to support McCants’ claims.