When Rob Rivers ’73 goes into battle, he likes to know the lay of the...

Billy Sweet ’95 led a federal research project to explain what climate change means for people living on the coast.

Sailing along a creek off the Chesapeake Bay two years ago with his wife and three children, William “Billy” Sweet ’95 steered toward their favorite beach. For years, they anchored their J/30 sailboat in deep water, rowed ashore in a dinghy and spent wonderful afternoons and evenings on the sandy spit of land.

But as they approached their secret hideaway, they discovered the beach was submerged beneath the water. As his daughter and two sons stared in disbelief, Sweet told them: Sea level rise scores again.

If seeing isn’t believing, Sweet has data to prove what happened in that spot near his home, and what’s occurring around the world. An oceanographer with the National Oceanic and Atmospheric Administration, Sweet was lead author on a federal sea-level report released in February predicting sea levels will rise on average 10 to 12 inches by 2050 with damaging flooding likely to occur 10 times more often than it does today.

Unless steps are taken to slow climate change, the report warned, rising seas will cause significant damage to homes and businesses, stormwater and wastewater systems and groundwater aquifers in the years to follow. 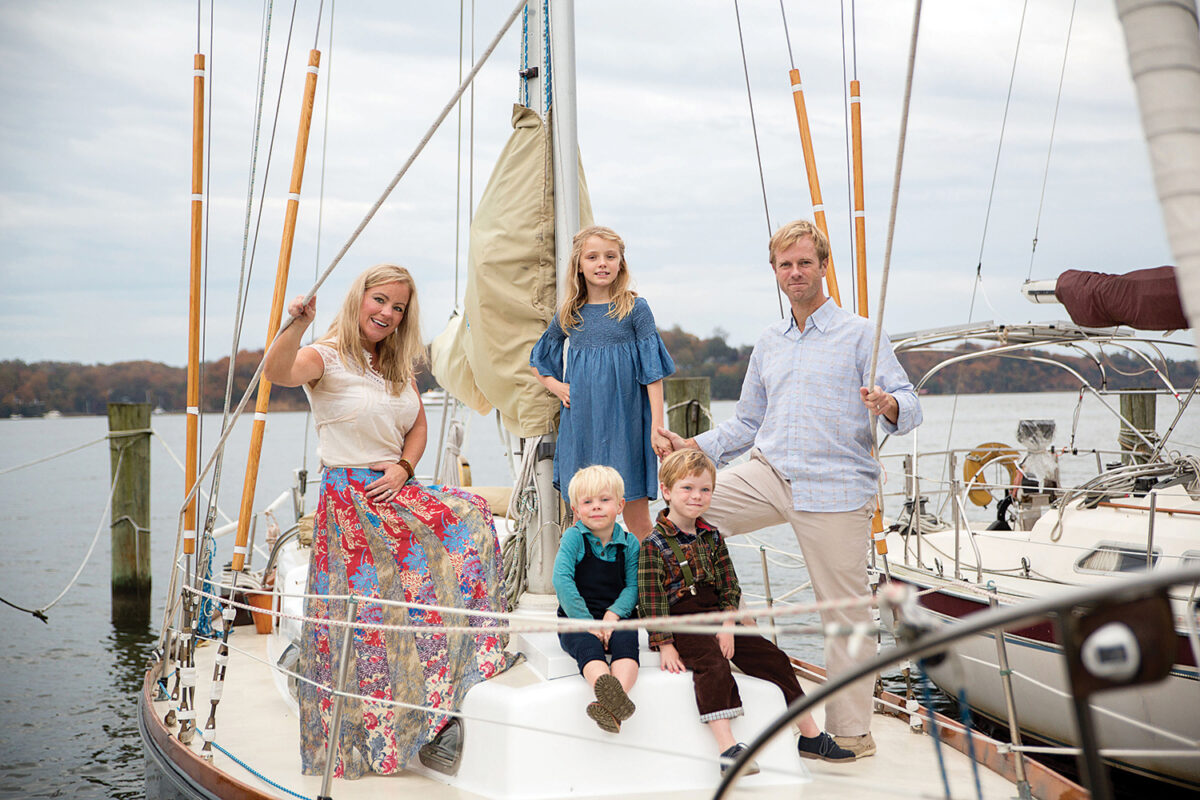 Billy Sweet ’95 with Whitney Pickens Sweet ’00 and their children. Sweet’s report warned sea levels will rise as much over the next 30 years, on average, as they did over the past 100 years, with the greatest impacts felt along the East and Gulf coasts of the United States. Photo courtesy of Billy Sweet ’95

To Sweet, the pursuit of data about sea-level rise feels as personal as it does professional. A Raleigh native, he grew up vacationing at Topsail Beach. He loves the coast and enjoys sailing, fishing and surfing.

“This is a wake-up call,” Sweet said, speaking from his home near Annapolis, Maryland. “It’s important for folks to know that 2050 is in our headlights. Beyond that, it’s important to recognize that emissions matter. Less emissions equals less heating equals less sea-level rise. It’s in our hands.”

The 2022 Sea Level Rise Technical Report provides greater clarity than previous reports about what communities can expect, based on data collected over the past five years, including tide-gauge and satellite observations.

The report warned sea level will rise as much over the next 30 years, on average, as it did over the past 100 years, with the greatest impacts felt along the East and Gulf coasts of the United States. Major and moderate high-tide flood events will occur at the same frequency as moderate and minor high-tide flood events occur today, putting more communities, infrastructure and ecosystems at risk.

Nothing done over the next few years to limit global temperature rise will change the 2050 sea-level rise predictions as those are locked in, Sweet said. But what is done from now on will affect how much sea level continues rising after 2050. The report predicted sea levels could rise as much as seven feet by century’s end — if greenhouse gas emissions are not reduced.

Though the data is sobering, Sweet remains optimistic.

“I feel like we will find a solution,” he said. “We have always found solutions. But I think it’s important to listen to what the data is telling us: Sea level is here and now. It’s not an end-of-the-century issue, and it’s only going to get worse, and we need to listen. The time to prepare is now.” 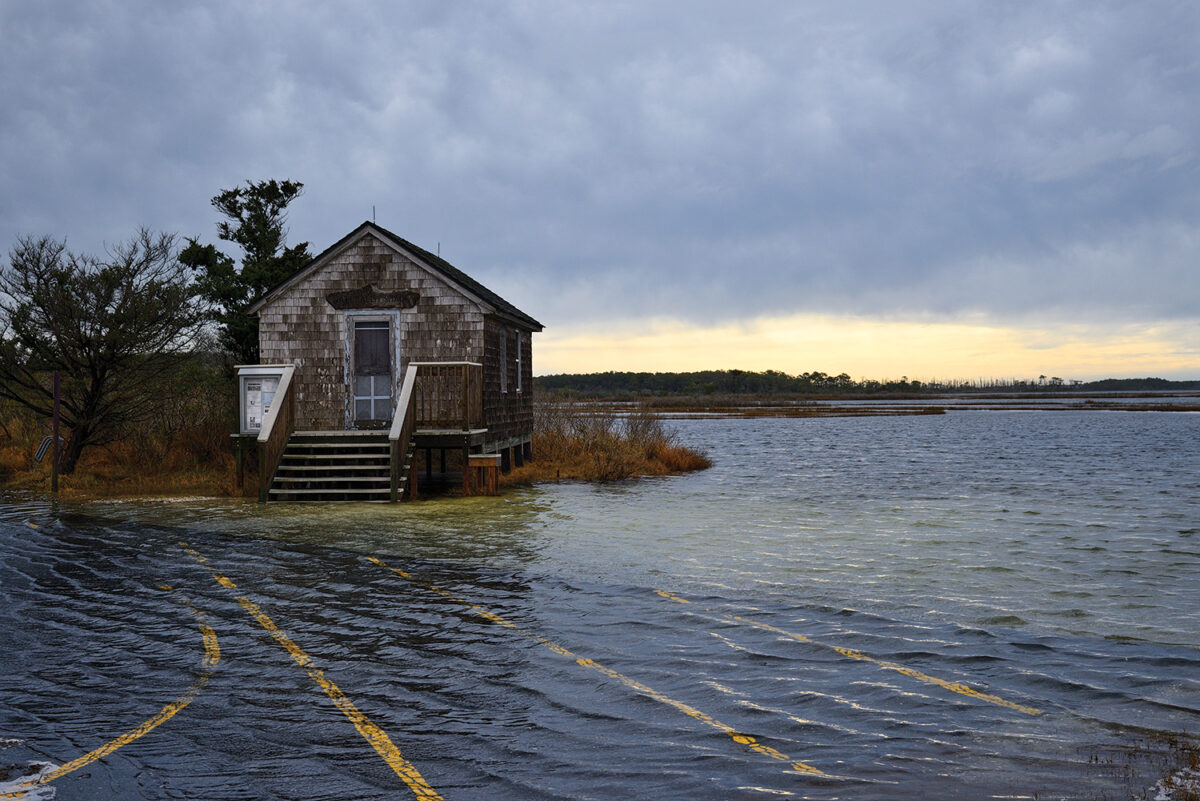 Sweet is NOAA’s acknowledged leading expert on sea-level rise. But when he enrolled at Carolina in 1991, his eyes were fixed on a different part of the universe. He planned to major in physics and minor in astronomy.

But after conversations with professors, he decided there were more opportunities in the oceans than in the skies and switched his minor to marine sciences. “That led me down into the basement of Venable Hall,” Sweet said. “I met some pretty interesting professors who sort of opened my eyes.”

One of them was Cisco Werner, acting assistant administrator for Oceanic and Atmospheric Research at NOAA. Werner, who taught at Carolina for 15 years before taking a job with NOAA, encouraged Sweet to master the programming platform MATLAB and other programming skills to help him better understand data and draw predictions from it.

Sweet impressed Werner when he undertook a project expanding on a course that Werner taught about how to build numerical models. “He was very careful with his work,” Werner said. “It was clear he was going to be able to contribute in important ways.”

Sweet credits his ability to translate scientific data into understandable terms to two semesters of mandatory writing courses at Carolina. “Data won’t always speak for itself,” he said. “You have to know how to communicate.”

After graduating, Sweet gained field experience working for oceanographers from N.C. State University. He anchored buoys outfitted with data-collecting instruments offshore along the East Coast and Antarctica and found his calling while working outdoors on the rolling waves. He couldn’t imagine working indoors at a desk job when he could help answer important global climate questions in such magnificent settings.

The job took him regularly to Charleston, South Carolina, where he met his wife, Whitney Pickens Sweet ’00, at the time a graduate  student at the College of Charleston. She now teaches in the department of education at the University of Maryland.

Sweet went on to earn his master’s of science and PhD in oceanography from N.C. State. While working on his master’s, he asked Rick Luettich, director of UNC’s Institute for Marine Sciences in Morehead City, to serve on his thesis committee. Sweet was interested in how circulation in the Neuse River contributed to fish kills, an area of research in which Luettich was also involved. Now, almost 25 years later, the two scientists are again collaborating — this time on a project to document water levels along the East and Gulf coasts over the past 40 years to help better predict future water levels.

Luettich said unlike past reports, Sweet’s study shows sea-level rise is occurring now, that it’s accelerating and has started to become a problem — all of which makes it helpful to shape public opinion and public policy. “Billy has been incredibly effective at figuring out how to translate complicated science into simple concepts,” he said. “The report didn’t change the science; it just did a better job of recognizing and understanding what the implications of the science are.” 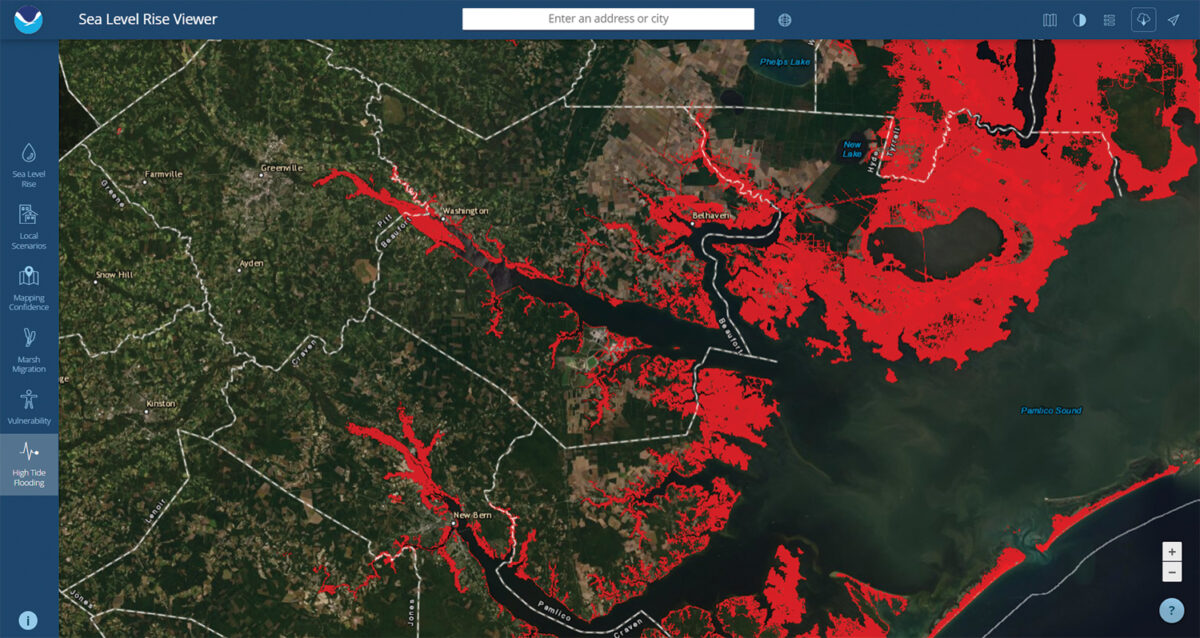 Sweet has data showing that the frequency of high-tide flooding — so-called sunny-day or nuisance flooding — has increased through time due to sea level rise. The red areas in this map of Eastern North Carolina are the lands above average high tide that typically flood during high tide flooding. Image: NOAA Sea Level Rise Viewer

Although Sweet travels nationwide for his job, he can see the effects of rising sea levels a couple of hundred yards from his home. He lives with his family about 45 minutes outside Annapolis on a creek off the Severn River, which flows into the Chesapeake Bay. Their community dock has been submerged so many times by rising tides, he said, it needs replacing.

Long gone are the days when coastal flooding typically occurred only during a storm. More and more often, flooding occurs on sunny days without provocation.

The projected trajectory is startling. Norfolk, Virginia, for example, experienced five days of high-tide flooding in 2000. Last year, 10 days. By 2050, Sweet said, the city can expect 60 to 170 days.

Flooding is no longer isolated along the coast. It is moving inland up tidal creeks, to cities such as Wilmington, Morehead City, Charleston and Annapolis, making streets impassable, destroying personal property and submerging infrastructure such as water and sewer systems.

The report includes a “Sea-Level Rise Viewer,” which allows users to visualize the implications of rising sea levels in their communities and could help guide local officials on how best to adapt. Take Morehead City, for example. High-tide flooding there is no longer limited to the waterfront, but extends up the Newport River to inland communities. With another foot rise in sea levels, some of those areas may be permanently submerged. A similar scenario is playing out in Charleston, where flooding has already moved inland along the Ashley and Cooper rivers.

According to the science, climate change is the main culprit for the rise in sea levels — but not the only one. There are other natural and unnatural causes that put the East and Gulf coasts at greater risk of catastrophic sea-level rise than West Coast communities. Areas around the Chesapeake Bay, for example, are sinking as part of a continuing readjustment to melt-off from the last ice age 12,000 years ago — or, as Sweet explained to his children, “500 grandmoms and granddads ago.” In parts of the mid-Atlantic and Gulf Coast, most notably in places like Galveston, Texas, the land is sinking because sediment has compacted due to the extraction of oil, gas and water from beneath the surface.

Sweet summed up the problem: “The water is rising. The land is sinking.” 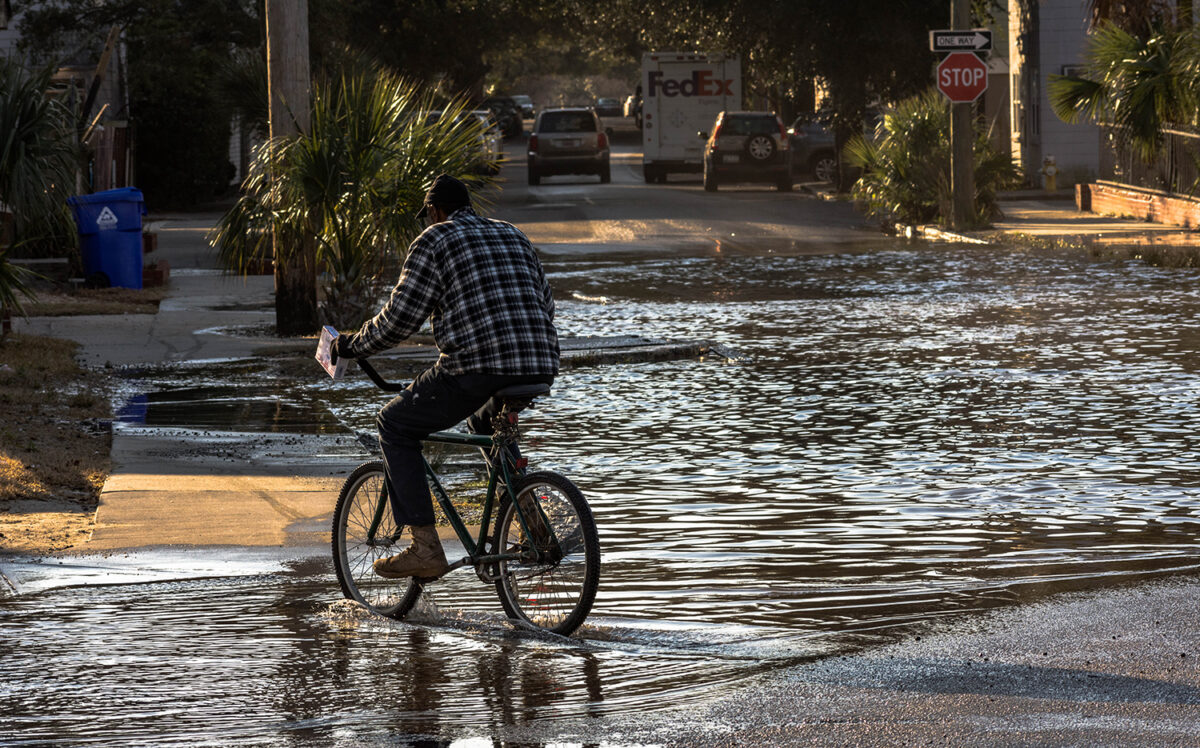 Unless something is done, Sweet said, nuisance flooding will soon become destructive flooding. “Decades ago, powerful storms were what typically caused coastal flooding,” the NOAA report explained, “but due to RSL [relative sea level] rise, even today’s common wind events and seasonal high tides are already regularly flooding communities, and they will do so to an ever greater extent in the next few decades.” Photo: iStock

Sweet’s interest in sea-level rise evolved over time. He took a job as an oceanographer with NOAA after receiving his PhD in 2008. He started with the office that operates and maintains tide gauges along the U.S. coastline. Not long afterward, he said, there was a sunny-day flood event around the summer solstice that lasted for about a week on the East Coast. Curious about the unusual flooding, he began working on the problem with a few others in his analytics group, focusing on the changing nature of the tide and sea-level rise.

“Let’s just say there was an opportunity for me, fresh on the beat, to bring to light what was going on,” Sweet said. “Decades worth of sea-level rise had started catching up. … We started calling it nuisance flooding — or high-tide flooding.”

Unless something is done, Sweet said, nuisance flooding will soon become destructive flooding.

“Decades ago, powerful storms were what typically caused coastal flooding,” the report explained, “but due to RSL [relative sea level] rise, even today’s common wind events and seasonal high tides are already regularly flooding communities, and they will do so to an ever greater extent in the next few decades.”

Sweet considers it his role to offer communities the best data and science. It’s up to communities to determine whether — or how — to respond. “We recognize solutions are often found and funded locally. Whether you’re in a big city, small city, rural, urban, we want to make sure this stuff is freely available,” he said. “We’re not going to tell you what to do.”

Whatever communities do, he said, will likely be costly. In Charleston, the U.S. Army Corps of Engineers proposed a $1.1 billion plan that would include construction of a 12-foot-high storm-surge wall around the peninsular city. The corps has also proposed a 20-foot wall across parts of Biscayne Bay to protect downtown Miami.

Sweet has passed on his love of all things coastal to his children and wants to make sure generations to follow can enjoy the same pursuits.

With his family’s favorite beach now underwater, they’re scouting for a new place to picnic, knowing full well if greenhouse gas emissions aren’t curbed, it, too, may soon disappear beneath the water.