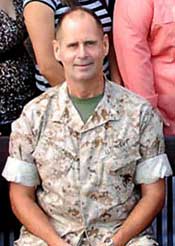 Cmdr. Charles Keith Springle ’79 was a “kind and gentle person, just the kind of person you want in a social worker,” and he was well-prepared to assist soldiers who were mentally scarred by combat.

That’s how former School of Social Work colleagues and others remembered Springle after learning that the Navy commander, who also earned his master’s in social work from Carolina in 1984, was among five people U.S. military officials say were shot and killed at a military clinic in Baghdad on Monday. Springle, a decorated officer, husband and father of two, was 52. He is Carolina’s first alumnus to have died in the six-year Iraq war.

Army Sgt. John Russell from Sherman, Texas, was charged in the shooting incident, which The Associated Press reported as the “deadliest case of soldier-on-soldier violence” among American forces in Iraq. Military officials identified the other victims as an Army officer, also on the clinic staff, and three enlisted soldiers, who were at the clinic at the time of the shooting.

It was unclear if Springle knew Russell or if any of the victims were targeted. According to media reports, Russell had been ordered in recent weeks to turn over his weapon and seek psychological counseling at the clinic where Springle worked.

A licensed clinical social worker, he received a bachelor’s degree in sociology from UNC in 1979, graduating with honors. After receiving his master’s degree in social work in 1984, he earned his doctorate in social work in 2003 from the University of Alabama. He was assigned to the 55th Medical Company and served as the director of the Community Counseling Center at Camp Lejeune. He also was a member of the GAA’s Alumni Career Advisor Network.

“He was very excited to be a part of this,” Pacelli said, “and he always got great reviews from participants. They loved his sense of humor and thought he was so sincere and very concerned about all soldiers with PTSD.”

Springle’s training sessions were vital, Pacelli said, because often returning soldiers, especially those in the Reserve service and National Guard, don’t seek mental health services through the Veterans Administration. Many don’t even tell their personal doctors that they have been in combat. But such information can be key to a diagnosis and proper medical attention, she said.

“That incident in itself is why this training and why treatment is so important,” Pacelli said of the Baghdad shooting. “It’s so what happened over there doesn’t happen again. So that people can get the treatment they want in a setting that they choose.”

That Springle spent much of his career in the armed services didn’t surprise Dorothy “Dee” Gamble, a former clinical associate professor at UNC’s School of Social Work. A North Carolina native, Springle had been a commander since 2002 and had served in the Navy for 21 years.

At UNC, Springle spoke passionately for those who served, Gamble recalled, and he enjoyed engaging her on the subject, despite their differing opinions on the military. “He knew that I was associated with the local chapter of the Women’s International League for Peace and Freedom, but it was the kind of conversation that helped us connect to each other’s perspectives,” Gamble recalled. “I thought at the time how lucky the military would be to have a social worker who deeply understood why we needed a military, but who was prepared for the tragedy and torment to young lives that an actual war could bring.

“He must have helped so many soldiers in his time. My sympathies go out to his family and all his colleagues helping other soldiers in the military.”

Bob Goodale was a friend and colleague of Springle’s and is the director of behavior mental health for the Chapel Hill-based Citizen-Soldier Support Program.

“He regarded it as very important work,” Goodale told The Associated Press. “We all who work in this know that it is difficult. This is an example of how difficult.”

Jack Richman, dean of the UNC School of Social Work, echoed Gamble’s condolences and praised Springle for serving in such an important field.

“Dr. Springle was working in a critical area in terms of supporting military personnel in dealing with post-traumatic stress,” Richman said. “His loss is a great loss to the field and clearly to the profession and to the military.”

Springle is survived by his wife, Susan DiCenzo Springle ’82, and two children.

Family and friends have established the Charles Keith Springle, Ph.D. Memorial Scholarship Fund for interested donors. The scholarship will support military-dependent students in the master’s of social work program at UNC’s School of Social Work who are working with military families or have an interest in mental health care for veterans and their families. Contributions may be made to the UNC School of Social Work (payee) c/o UNC School of Social Work Development Office, 325 Pittsboro St., Campus Box 3550, Chapel Hill, NC, 27599-3550. For more information, contact Mary Beth Hernandez, (919) 962-6469.

This article originally appeared on the UNC School of Social Work’s Web site and is reprinted with permission.