Joel Curran ’86, a senior executive in one of the world’s largest public relations agencies, has been named UNC’s first vice chancellor for communications and public affairs. 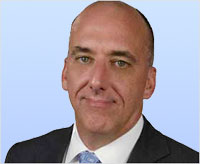 Curran is a 27-year veteran of the public relations industry in a career that has included leading key offices for prestigious agencies and corporate communications offices for The Walt Disney Co. Currently, he is the managing director of the flagship New York office for MSLGROUP, the world’s fourth-largest public relations and engagement agency and the strategic communications group for the Paris-based Publicis Groupe. In that role, he is responsible for nearly 200 employees. Previously, he ran MSLGROUP’s Midwest operations.

Curran, a native of Lexington who earned a bachelor’s degree in journalism from Carolina, is a member of UNC’s School of Journalism and Mass Communication’s board of advisers.

As vice chancellor, Curran will be the University’s senior public relations professional and manage efforts to help interpret and promote Carolina’s mission with key audiences. He will oversee a University Relations staff that works closely with other campus colleagues supporting schools and units. The central staff produces stories and content for the University’s website and includes units responsible for media relations, official social media accounts, internal communications, and print and web design.

Curran has worked at public relations agencies in Los Angeles, Chicago and Charlotte and spent more than a decade with Disney, rising to director of synergy for the company’s network television and professional sports franchises. He was the Chicago Public Relations Society of America chapter’s Public Relations Professional of the Year in 2010 and has been an adjunct instructor in public relations and marketing at the University of Chicago’s Graham School of Continuing Liberal and Professional Studies.

Chancellor Carol Folt announced the appointment, effective Dec. 2, which was approved by the UNC Board of Trustees. She selected Curran after a national search and the work of a search committee.