Surojit “Surge” Biswas ’13 has received a Churchill Scholarship, valued at $62,000, for 2014-15 to do graduate work at the University of Cambridge in England. 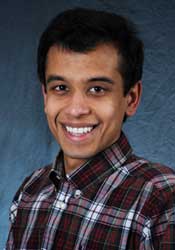 Biswas is one of 14 candidates chosen nationwide for the one-year award by the Winston Churchill Foundation of the United States, which was established in 1959.

The award is given to American undergraduates planning to pursue graduate studies in science, mathematics and engineering. Recipients are chosen for exceptional academic talent and achievement, capacity for original and creative work at an advanced level, and outstanding personal qualities.

Biswas, of Raleigh, graduated from Enloe High School in May 2009. He plans to pursue a master of philosophy degree in plant sciences at Cambridge and then seek a doctorate in translational bioinformatics.

Biswas earned his bachelor of science degree from UNC in mathematical decision sciences, participated in Honors Carolina as an undergraduate and was inducted into Phi Beta Kappa in May 2012. He chose to remain for a year after graduation to complete his research project at UNC. He has been conducting experiments aimed at understanding how and why microbes interact with plant hosts. In the future, agronomists could use these findings to engineer novel bacterial communities that boost crop yield and stabilize grain production for our growing population.

“Given ongoing improvements in measurement technology like DNA sequencing, big biological data is increasingly becoming the norm. I want to use statistics and computer science to mine these data sets for answers to highly applied problems,” Biswas said. “The opportunity to work at Cambridge with a world-class scientist toward genetically engineering thermally stable crops is a fantastic opportunity. … Getting to do so at a university with the richest of cultures — scientific and otherwise — is exhilarating. I’m truly thankful for this awesome opportunity.”

“Jeff, Corbin and Vladimir are exceptional mentors. Their sustained involvement in my research has been central to my development as a scientist. Importantly, they’re deeply passionate about their work and encouraging of independent thought, which in turn, gets me excited about the experiments I get to plan and execute every day.”

Biswas also has conducted research in computational biology at the University of Oxford in England as part of a six-week program and has contributed to three publications.

“Surge is an exceptional student and deserving recipient of the award,” said J. Jason West, associate professor in the department of environmental sciences and engineering and chair of the UNC Churchill Scholarship Selection Committee. “He has already developed several computer programs for use in computational biology. His enthusiasm for his work is infectious.”

Aside from conducting research, Biswas enjoys running four to five times a week. He also participates in machine-learning and big-data competitions.

He was the recipient of the Beckman Scholars Award in 2010 and received an honorable mention for the 2012 Goldwater Scholarship.