The Politics of Goosebumps: Matt Andrews ’08 Serves History of Sports

Standing in front of a classroom, history professor Matt Andrews ’08 (PhD) has a keen...

A Diva for Diversity

The night after Christmas in 1955, Martha Flowers stood onstage at the Leningrad Palace of...

Where the Past Complicates the Present

Boley, Okla., is a quiet place. The schools have closed, the brick buildings along Pecan...

An Astronaut for the Information Age 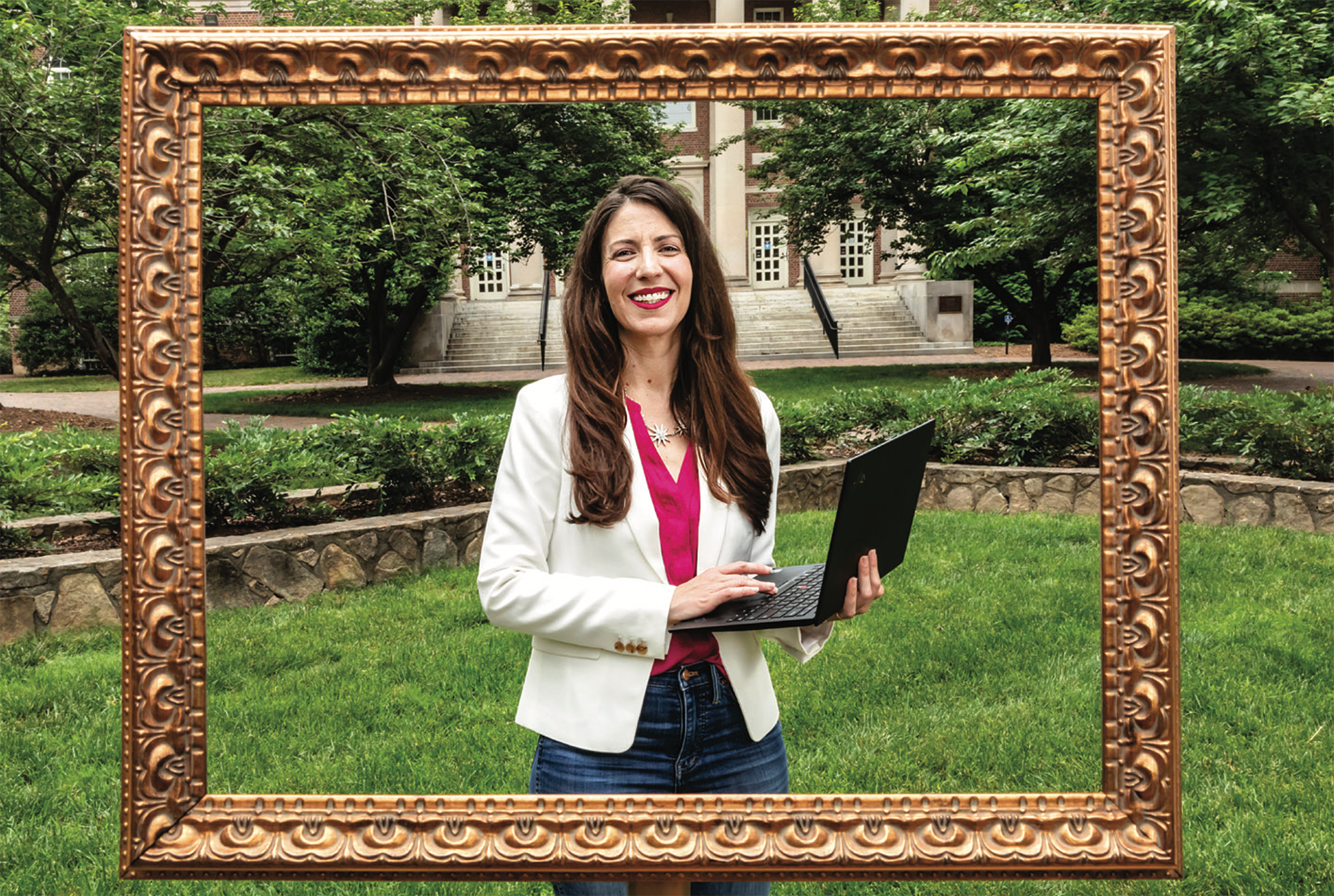 Francesca Tripodi studies how communities manipulate platforms such as Wikipedia and Google in ways that programmers never intended, including for political gain. (UNC/Johnny Andrews ’97)

Francesca Tripodi’s research often begins with the question, “Why?”

Why, she wondered, were fewer than 19 percent of the 1.5 million biographies on English-language Wikipedia about women? Her research led her to a surprising discovery: Biographies of notable women were being disproportionately nominated for deletion despite meeting Wikipedia’s criteria for inclusion.

In a paper published in June, Tripodi, who is an assistant professor in UNC’s School of Information and Library Science, labeled the practice of gender exclusion as the “Donna Strickland” effect:

“On March 7, 2014, a biography for Donna Strickland, the physicist who invented a technology used by all the high-powered lasers in the world, was created on Wikipedia,” Tripodi wrote. “In less than six minutes, it was flagged for a ‘speedy deletion’ and shortly thereafter erased from the site. This decision is part of the reason Dr. Strickland did not have an active Wikipedia page when she was honored with the Nobel Prize in Physics four years later.”

“We tend to think of Google as this window into the world. But my research reveals that search engines actually act a lot more like mirrors, reflecting our own interests and our own biases back to us. And that our keywords and queries are shaped by our existing and often invisible ideological biases.”

Tripodi describes herself as a sociologist who studies “socio-technical vulnerabilities.” In other words, she looks at how communities manipulate platforms such as Wikipedia and Google in ways that programmers never intended.

Her interest began when she was in graduate school at the University of Virginia, working as a teaching assistant. She learned from students about a now-defunct smartphone app called Yik-Yak where users could place anonymous posts. The app was designed to curb cyberbullying by automatically deleting comments if a certain number of users marked the posts as offensive. But Tripodi’s research revealed that people were using that function to silence minority viewpoints. Instead of deleting comments such as “Jane is so ugly,” for example, they were deleting posts that supported the Black Lives Matter movement.

She applied the same “algorithmic silencing” to her research into Wikipedia. She attended gatherings of volunteer Wikipedia editors who hoped to improve gender equity on the website. Tripodi said that participants at these edit-a-thons were frustrated because biographies of clearly eligible women were being nominated for deletion, and the volunteers were spending additional time making sure those biographies were not erased. Editors do not add information to the contested articles, which are usually well-sourced — a practice often done in conjunction with librarians. But they do monitor the biographies and fight for inclusion if any are challenged.

That monitoring “adds to the emotional labor and time required to try and improve Wikipedia’s gender gap,” Tripodi said.

The fact that women “go missing from Wikipedia,” Tripodi believes, has implications beyond the online encyclopedia, affecting our understanding of women and their contributions to society. Her paper, “Ms. Categorized: Gender, notability, and inequality on Wikipedia,” appeared in the June edition of New Media & Society.

Rochester wrote a computer script for Tripodi that pulled together all biographies nominated for deletion from Wikipedia from January 2017 to February 2020. Tripodi found that in some months, women’s biographies were nearly twice as likely as men’s biographies to be mischaracterized as not notable.

“Wikipedia has a lot of authority. We sometimes take these things for granted,” said Rochester, who now works at WillowTree, a digital products company. “It’s good we’ve got people like her willing to dig into what’s happening under the covers and help us use these tools in a much more educated way.”

Tripodi’s work caught the attention of Gary Marchionini, dean of the School of Information and Library Science, who recruited her to join the faculty at Carolina in July 2020. He compared Tripodi to an astronaut exploring new territory — in her case, “tough boundary issues from a sociological lens.”

“She is bridging sociology, information science and technology,” Marchionini said. “That’s really why she’s such a perfect fit for us. She’s very creative and very dedicated.”

Tripodi moved to Chapel Hill from James Madison University in Harrisonburg, Va., where she taught for two years. In addition to her appointment in the School of Information and Library Science, she is a senior faculty researcher with Carolina’s new Center for Information, Technology, and Public Life.

“English-language Wikipedia contains more than 1.5 million biographies about notable writers, inventors, and academics, but less than 19% of these biographies are about women.  … Biographies about women who meet Wikipedia’s criteria for inclusion are more frequently considered non-notable and nominated for deletion compared to men’s biographies. This disproportionate rate is another dimension of gender inequality previously unexplored by social scientists and provides broader insights into how women’s achievements are (under)valued.”

“She really hit it off with all the faculty, not just because of the work she was doing but the fact that her work was very information intensive and search-engine intensive,” Marchionini said. “And students flock to her because of her take on how information behavior relates to social and political behavior.”

Tripodi’s latest research focuses on how information systems such as Google and Wikipedia are wielded for political gain.

“We tend to think of Google as this window into the world,” she explained in an introductory video after arriving at Carolina. “But my research reveals that search engines actually act a lot more like mirrors, reflecting our own interests and our own biases back to us. And that our keywords and queries are shaped by our existing and often invisible ideological biases.”

The result, she said, can be “parallel internets.”

For example, she told the Review, if you type the words “illegal aliens in North Carolina,” you will be directed to information about immigration enforcement. If instead, you type in “undocumented workers rights in North Carolina,” the posts you get will be about protections for immigrant workers.

Contrary to allegations that Big Tech silences conservative viewpoints, Tripodi found that conservatives are more Internet savvy than moderates or liberals — that they excel at search engine and social media optimization to promote their views.

“They have better financial resources, time and technical know-how to elevate digital marketing,” Tripodi said. “If anything, liberal news and progressive news are way behind and have a lot of catching up to do. They don’t seem to be tagging their content in ways that elevate their stories, and they don’t seem to understand what stories are being reported by conservative news. That leaves a vacuum opened by lopsided information.”

In 2019, Tripodi testified before the U.S. Senate Committee on the Judiciary about her research, and next year Yale University plans to publish her book about it, The Propagandists’ Playbook.

Last fall semester at Carolina, Tripodi taught a graduate-level seminar on misinformation and society and a graduate class on research methods. She said she enjoys interacting with students in the classroom and finds they have a lot to offer.

“Students help you understand what’s going on in the world in an important way,” Tripodi said. “The way I learned about Yik-Yak was from students. They just provide a really cool lens for seeing the world and helping you stay up to date.”