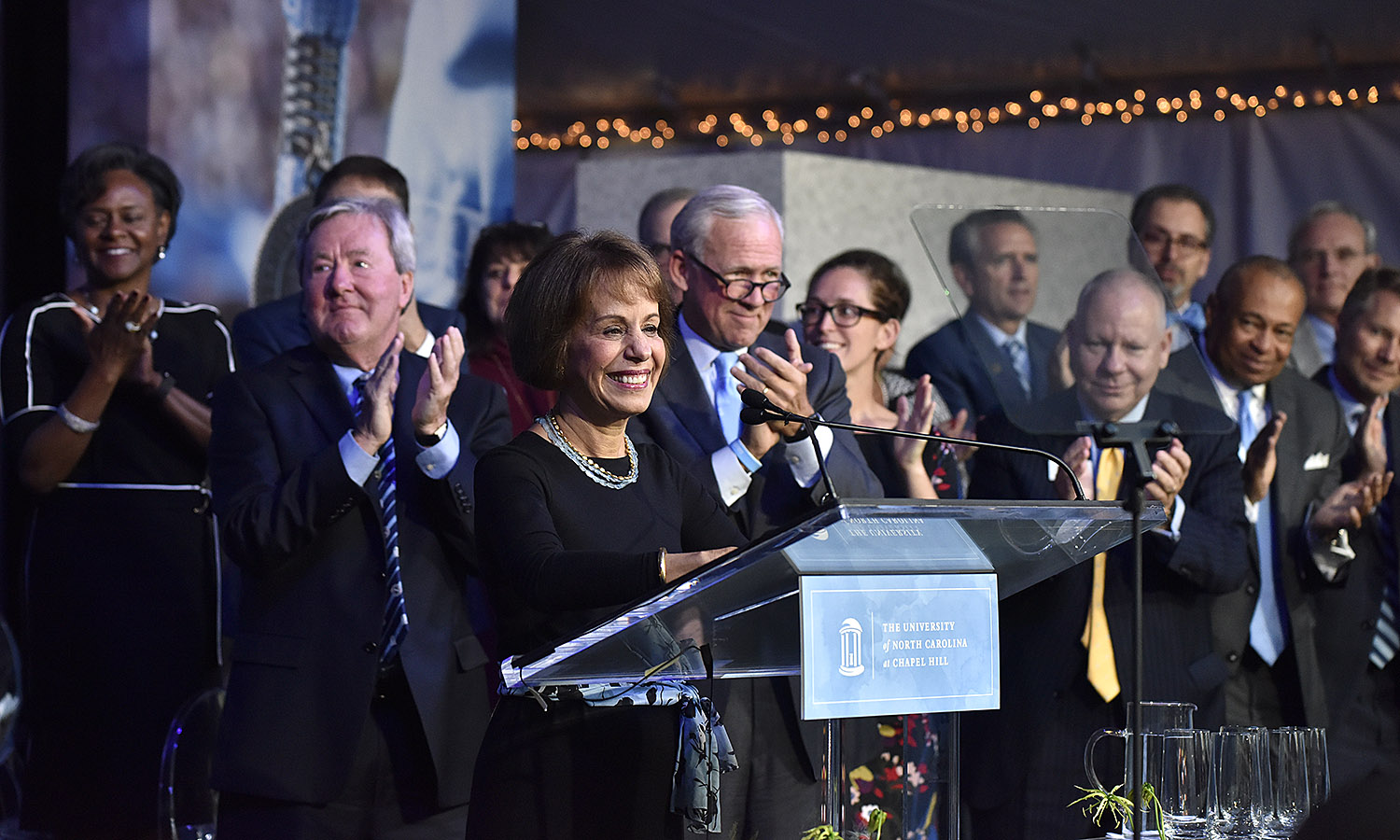 The University has launched the most ambitious fundraising campaign by a university in the history of the state. “For All Kind: The Campaign for Carolina” aims to raise $4.25 billion by Dec. 31, 2022.

The campaign — focused on research and scholarship, leading by example and “ethos” — is the largest in the Southeast and the second-largest among public institutions in the nation. By comparison, Duke University recently concluded its Duke Forward campaign, which raised $3.85 billion.

The launch marked the end of the initial “quiet phase” of the campaign, in which $1.75 billion already has been raised from 137,000 donors.

Students, faculty, staff, alumni and volunteers joined Board of Trustees Chair Haywood Cochrane ’70, Chancellor Carol L. Folt and Vice Chancellor for Development David Routh ’82 for the announcement, which highlighted several gifts and initiatives supporting what UNC calls the “Blueprint for Next.”

The largest university fundraising campaign in the Southeast will continue for the next five years with a goal of $4.25 billion. Already, $1.75 billion has been raised from 137,000 donors.

“Our ambitious Campaign for Carolina unites us with a shared and meaningful vision for the future of our leading global public research university,” Folt said. “Underlying this clear vision lies the Blueprint for Next, a unifying strategic framework that guides our commitment to Carolina’s historic mission of providing superior educational opportunities at the best and most affordable price, conducting game-changing research, innovating for the public good and bringing health and prosperity to people in our state and beyond.”

In an event on historic Polk Place on Oct. 6, Folt and Routh announced several gifts and signature initiatives to kick off the campaign. By the end of the weekend, the University had announced more than $100 million in support of the campaign.

“The incredible generosity of our donors like the Townsends will continue to provide the margin of excellence that makes Carolina better in everything we do,” Routh said. “The Campaign for Carolina will help us attract the best students and keep the most outstanding faculty members on our campus. We will be able to conduct research and deliver care that improves the lives of people across our state and around the world. The impact will be felt for many years ahead.”

Over the following two days, two fundraising challenges were announced:

The four key priorities of the comprehensive fundraising campaign are:

Carolina’s last comprehensive campaign, Carolina First, concluded at the end of 2007, during which more than 194,000 donors contributed $2.38 billion.