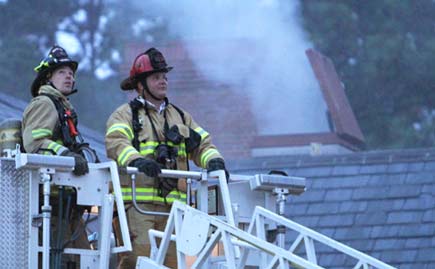 The fire in Cobb dorm on Nov. 5 started in a recessed lighting fixture in a bathroom, University officials say. Beth Koza, director of environmental health and safety, said the fixture showed a charring and a “V” burn pattern that indicated it was the point of origin.

“A light in one of the showers had some insulation laying right on top of it,” Billy Mitchell, EHS fire and safety emergency response manager, told The Daily Tar Heel. “Over a period of time the heat built up, and it caught on fire.”

There were no injuries in the early evening fire that was confined to the fourth floor and attic of the 61-year-old dorm with a 380-student capacity.

Residents of the first three floors were allowed back in their rooms three days after the fire. Seventy-six fourth-floor residents are not able to return this semester, and temporary campus housing has been provided for those requesting it.

Cobb was evacuated safely after the fire broke out at about 4:30 p.m. Six fourth-floor rooms, home to 11 students, were damaged significantly. Officials said there was no damage to the roof.

About 200 of the displaced students had asked for temporary on-campus housing — UNC had about 250 spaces available across the campus — and the others made their own arrangements.

The Cobb residents were allowed in the building in shifts on the night of the fire to retrieve personal items from their rooms.

Built in 1952, Cobb was renovated in 2005, including the addition of some common-area rooms, central air conditioning, an elevator and accommodations for disabled people. It is equipped with a sprinkler system, smoke detectors and alarms.

All campus residence halls have sprinkler systems except Odum Village, the former married student housing that is used now as overflow housing, primarily when one or more dorms are closed for renovation. Remaining Odum buildings are scheduled for demolition by 2015.