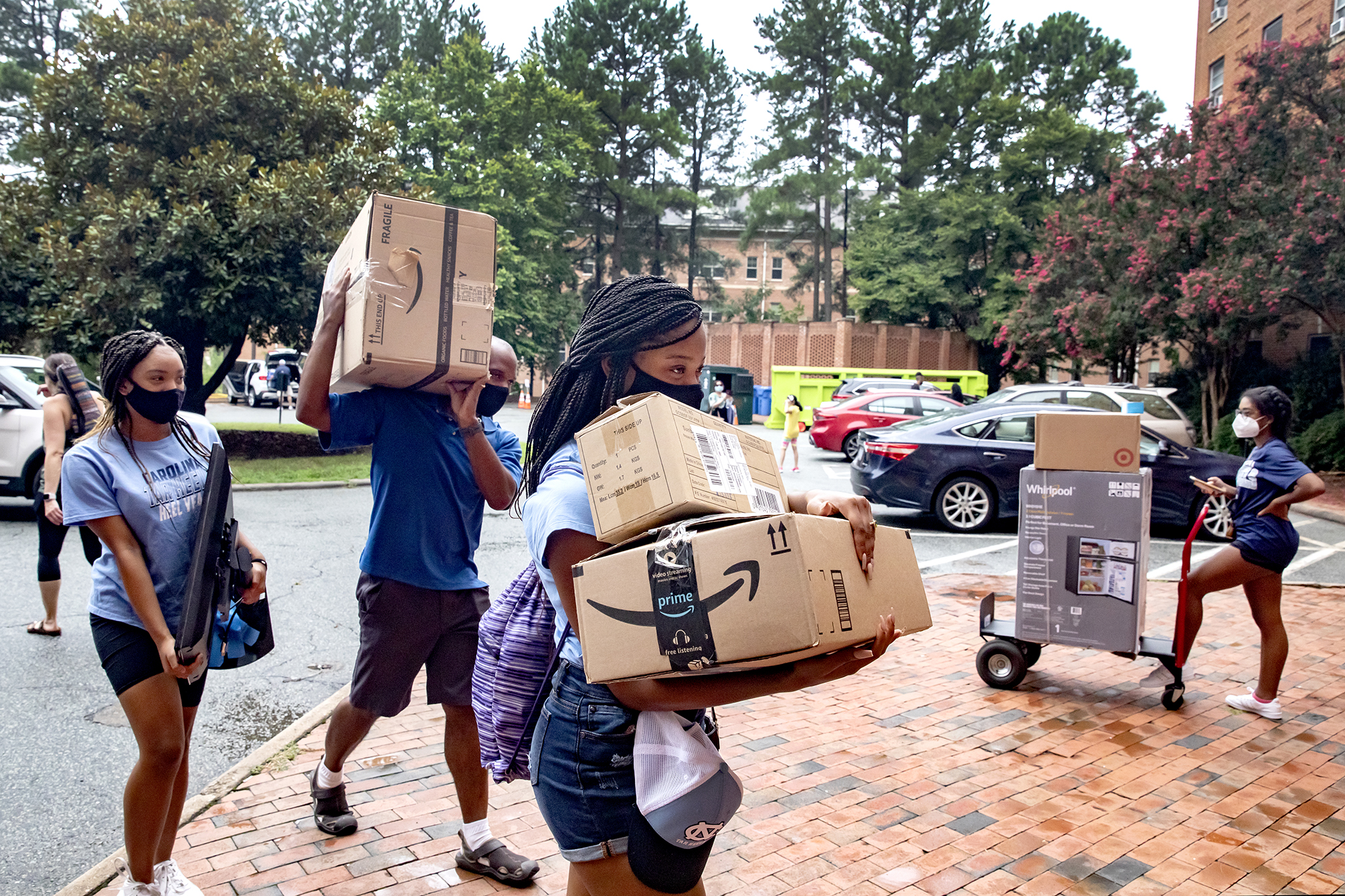 The Orange County health director is concerned about the potential spread of the COVID-19 virus as students, faculty and staff return to the Chapel Hill campus, and she has urged the University to move to online-only classes for at least the first five weeks of the semester. She also wants on-campus housing restricted to students lacking access to reasonable resources such as online access and those who have challenges — such as international students, low-income students and those who face risks at home.

And those students, she said, should be restricted to single-occupancy rooms.

Quintana Stewart on July 29 sent a letter to Chancellor Kevin Guskiewicz that says: “As students have begun to return to campus prior to the official start of the Fall Semester we’ve experienced a small fraction of what we will see if the campus fully reopens and all the students return for in-person class.

“In the last 4 weeks we’ve seen positive COVID clusters among UNC staff and athletic teams. We’ve experienced the increased activity and gathering on Franklin Street that resulted in clusters that visited a couple of local restaurant/bar establishments. We’ve seen the off campus parties and gatherings at Greek Houses. We’ve also experienced the lack of cooperation from students with the communicable disease investigation and control measures mandated” by state law.

The health department has not issued a stay-at-home order, which could stop on-campus classes. UNC is operating under a mandate from the UNC System, which governs the state’s universities, that it open for the fall semester. 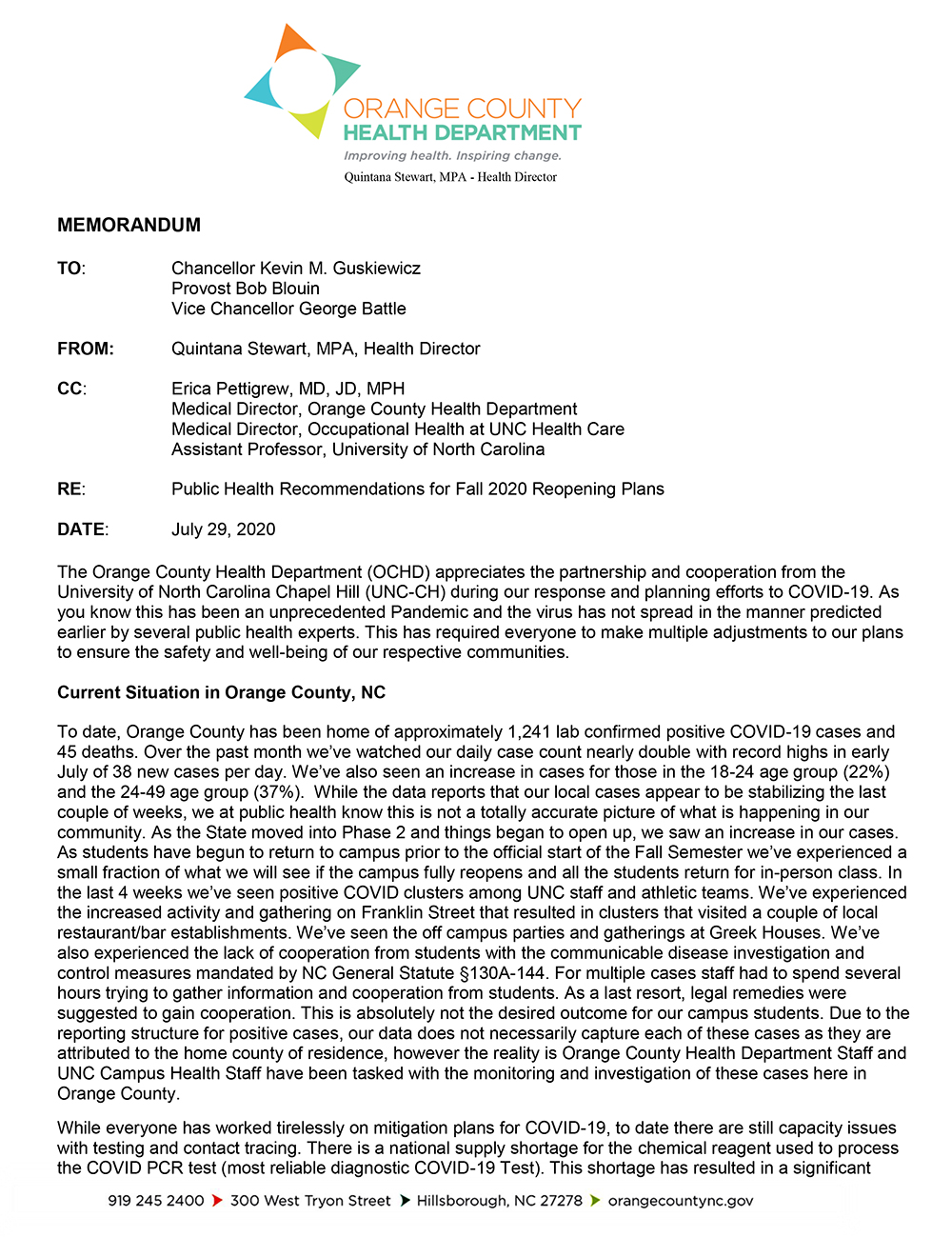 The Faculty Executive Committee called an emergency meeting late Wednesday to share concerns with Guskiewicz and Provost Robert Blouin that the week-old health department letter had not been shared with others on campus.

Faculty Chair Mimi Chapman ’97 (PhD) preceded the meeting with a letter to Guskiewicz and Blouin that said in part: “We are completely shocked that such a letter would’ve been received last week and that none of us have known about it until now — hours before it has turned up in The News and Observer. It feels like a serious breach of trust to have kept such recommendations from the campus community of faculty, staff, and students.”

Chapman said she would change plans to hold an in-person orientation for doctoral students on Thursday, “and my class that was planned to be delivered in person will change to remote. I could not possibly do otherwise in the face of such a letter from our local health department.”

Chapman went on to say she was getting regular reports that social distancing and masking requirements were not being followed, and the conversation in the meeting, with Guskiewicz and Blouin in attendance, turned to how well safety measures designed for the pandemic were working.

Guskiewicz and Blouin said they shared concerns about the acknowledged risks of reopening the campus but that they believed in the measures they’ve put in place.

The University maintains an elaborate “roadmap” for the return to campus amid the pandemic. What it calls its community standards include wearing of masks in classroom and academic buildings and social distancing conditions when on campus. Administrators have been steadfast in saying that the campus can resume operations safely.

“I discussed this matter with the UNC System, and we were advised by the UNC System to stay the course with our current plan,” Guskiewicz said.

In a message to the campus community released while the meeting was underway, Guskiewicz acknowledged receipt of the health department letter and said UNC had increased the number of courses that offer in-person and online teaching, “thereby limiting on-campus in-person classroom occupancy to only 30%. We reduced our on-campus residential capacity to 64%.”

That indicates that the campus possibly will be at far less than full capacity for the fall.

“It would be good to hear this from you and Bob and not from the newspapers,” committee member Joy Renner ’80 (’92 MA) said.

Sue Estroff, a former chair of the faculty, asked, “If everything is going so well in our collaboration with Orange County, why did they feel they had to write this letter?”

Guskiewicz said he couldn’t speak to why the letter was written.

Chapman’s letter continued: “Yesterday, I received word from a faculty member that in Student Stores, which was packed, only a third of people there were wearing masks. Just now I received a video from a citizen who videotaped a line of what appeared to be sorority women — at least 50 — coming out from an indoor, unmasked gathering at 210 Ransom Street.

“These look like off-ramps to me.” “Off-ramps” is the University’s term for moving away from the roadmap if conditions in the pandemic worsen.

Guskiewicz said, “Quite honestly, we felt like we had addressed the concerns and [that was] not in line with what they asked us to consider.”

Blouin added: “I was surprised by the letter. I’ve enjoyed our conversations.”

Guskiewicz said in the campus message: “We reviewed their recommendations, and carefully analyzed our current status and the steps we were actively taking to de-densify our campus. We believe we have made significant progress towards aligning with the OCHD’s general recommendations and considerations. … We will continue to track trends that could lead us to recommend a modification to our plans.”

As students began moving into dorms Monday, with classes scheduled to start Aug. 10, UNC’s COVID-19 tracking dashboard showed 175 positive cases on campus — 139 students and 36 employees. Of the 1,312 students who had been tested, 139, or 10.6 percent, were positive.

In June, 37 athletes and people associated with athletics tested positive after they returned to campus for summer workouts.

NC Policy Watch reported the comments of Deb Aikat, an associate professor in the Hussman School of Journalism and Media, who has been vocal in several faculty meetings of his concerns about the dangers of students returning.

“I hope all will go well,” Aikat said. “But there is already some evidence that students and employees and faculty are being affected by COVID. If you take a walk on Franklin Street, nobody is wearing a mask, nobody is social distancing. I was there yesterday on Franklin Street. I was appalled.”

Since May, there has been a steady stream of concern, particularly from faculty members, about the safety of students returning. More recently, housekeepers and others responsible for providing basic services on the campus have said many among them don’t feel safe.

On Saturday, the UNC Commission on Campus Equality and Student Equity, created by the Undergraduate Senate this summer to work on policy issues and a dialogue on racial justice, said the University has not communicated its plans to students adequately and said the return to campus is not safe.

“Through our dialogue with undergraduates, graduate and professional students, and community residents, we have found that major concerns currently exist regarding internet accessibility, effective adherence to community guidelines, and the lack of asynchronous course offerings,” the commission said. “Presently, there are too many health and socioeconomic hurdles in place for both our students and the residents of Chapel Hill to confidently state that it is appropriate to bring students back to our campus.”