For Winston Crisp ’92 (JD) to give out his cellphone number to a couple of thousand anxious parents each year for use in case of an emergency, he had to make darn sure he didn’t... 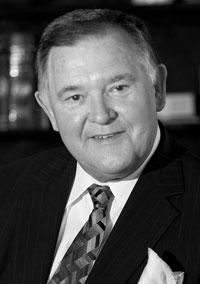 A subpoena that led to the downfall of an American president will have a new home at UNC, thanks to a donation by Raleigh lawyer Rufus Edmisten ’63.

Edmisten, deputy chief counsel to the Senate Watergate Committee chaired by Sen. Sam Ervin (class of 1917) of North Carolina, served President Richard Nixon with the subpoena on July 23, 1973. That original subpoena, along with Edmisten’s personal archive, is becoming part of the Southern Historical Collection in the Wilson Special Collections Library, home of Ervin’s papers since 1975.

Edmisten will mark the donation of his papers to the University at 5:30 p.m. Sept. 20 with a free public talk in the Pleasants Family Assembly Room in Wilson Library. Chancellor Holden Thorp ’86 plans to interview Edmisten and moderate questions from the audience.

The Edmisten papers arrive 40 years after the June 1972 break-in at the Democratic National Committee headquarters at the Watergate office complex that gave the scandal its name. The investigation of the break-in and the Nixon administration’s cover-up of its involvement — including the White House tapes that Edmisten subpoenaed and Nixon refused to release — eventually led to Nixon’s resignation.

“Uniting the Edmisten papers with those of Senator Ervin at UNC presents a tremendous opportunity for research,” said Tim West ’72 (MAT, ’76 MSW), curator of the Southern Historical Collection. “Taken together, they demonstrate the critical role of North Carolinians in investigating this country’s greatest political scandal.”

Both the famed subpoena, from Edmisten’s papers, and Nixon’s letter of refusal, from Ervin’s papers, will be on display in the Wilson Library lobby at 5 p.m., just before Edmisten’s talk.

Also on view will be notes that Ervin made during the hearings, letters he received and other items linked to the Watergate affair from both archives.

His papers also document Edmisten’s 30 years of public service in Washington and in North Carolina. Edmisten, a native of Boone, graduated from George Washington University law school after majoring in political science at Carolina. After serving for 10 years on Ervin’s staff, he returned to North Carolina and was elected attorney general in 1974. He ran for governor in 1984. He served as secretary of state from 1988 to 1996 before launching a private law career with the firm that is now Edmisten, Webb & Moore in Raleigh.