With classes canceled for a day devoted to mental health, Carolina observed a somber 228th birthday that leaders called a time for reflection, reckoning and resilience. Coming during not only a lingering pandemic but also a more acute mental health crisis on campus, University... 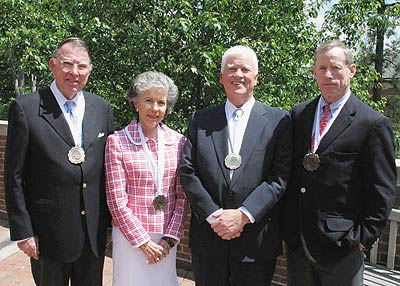 The General Alumni Association presented its 2006 Distinguished Service Medals at the Annual Alumni Luncheon on Saturday to four individuals who share a long and storied history of service to the welfare of the University.

Outgoing GAA Chair Jean Almand Kitchin ’70 presented the awards to Max Chapman ’66 of Scarborough, N.Y., chair of the UNC Endowment Fund; Mary Anne Dickson ’63 of Charlotte, co-chair of the Women’s Leadership Council; Carl Matheson ’57 of Hickory, a past chair of the GAA Board of Directors; and C.D. Spangler ’54 of Charlotte, former president of the UNC System.

“In ways large and small, this year’s recipients have given themselves time and again to Carolina, enriching the educational experiences of our students and ensuring that UNC continues to achieve its full potential,” said GAA President Douglas Dibbert ’70. “The success of their efforts should inspire others who look for ways to give back to our University and our alumni association.”

Max Chapman is a former president and CEO of the Wall Street firm Kidder, Peabody & Co., and he served the American Stock Exchange as its vice chairman. He also served the Japanese financial firm Nomura Securities in several executive positions.

Chapman is chair of the UNC Endowment Fund and is a member of the Carolina First steering committee. He made possible the golf team’s Chapman Center facility at Finley Golf Course and established a teaching fellowship at UNC. He has served on the board of the Arts and Sciences Foundation and the University of North Carolina at Chapel Hill Foundation. In 1996, he was recognized by the UNC Board of Trustees with the William R. Davie Award.

After earning her UNC degree in political science, Mary Anne Dickson attended the Katharine Gibbs School for private post-secondary education and served as the assistant to the chairman and CEO of Hardees Food System. In 1984, she earned a business administration degree from North Carolina Wesleyan.

A member of the Carolina First steering committee and co-chair of the Women’s Leadership Council, Dickson has served on the UNC Board of Visitors and was its chair in 1998-99. She has given generously to women’s studies, the Institute for the Arts and Humanities, the Sonja Haynes Stone Center for Black Culture and History, and the Lineberger Comprehensive Cancer Center. She and her sister honored their late father with the Charles Garland Johnson Sr. Scholars Fund in International Studies, a scholarship for students who would not otherwise be able to afford to study abroad. In 2003, Dickson received the William R. Davie Award from the UNC Board of Trustees.

Carl Matheson, retired chairman and CEO of Southwood Furniture Corp., has served the University in a variety of roles over the years. He has served on the UNC Board of Visitors and the executive committee of the Rams Club, and he has chaired county and regional Morehead Foundation selection committees. He is a member of the board of directors of The Carolina Club and is president of the Hambrick Memorial Foundation, a philanthropic organization based in Hickory.

Matheson has been a member of the UNC Educational Foundation’s executive committee. He is a past chair of the General Alumni Association’s Board of Directors, on which he served for more than a decade.

Dick Spangler, the first in his family to go to college, followed his Carolina degree with an MBA from Harvard Business School. After two years in the military, he joined the family business, C.D. Spangler Construction Co., in Charlotte and expanded the family’s holdings to include Golden Eagle Industries Inc., National Gypsum Co. and The Wakefield Group. He is credited with turning around the fortunes of the Bank of North Carolina, founded by his father, which merged with North Carolina National Bank, and which today is Bank of America.

As vice-chair of the Charlotte-Mecklenburg school board in the early 1970s, Spangler helped lead the successful integration of public schools. He stepped down as chair of the state Board of Education to step up to the presidency of the UNC System in 1986, a position he held for 11 years.

The Spangler Foundation has created 38 distinguished professorships within the UNC System. Spangler’s list of honors includes the UNC System’s University Award and the William R. Davie Award from the UNC Board of Trustees, and Harvard’s Alumni Achievement Award.

The GAA has awarded the medals since 1978 to UNC alumni and others who have provided outstanding service to the GAA or the University. The GAA is a self-governed, nonprofit organization serving alumni and friends of UNC. A list of past award recipients is available online.