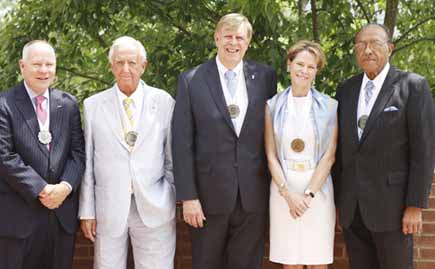 The GAA has honored five alumni for their outstanding service to the University and to the association.

The medals were awarded at GAA’s annual Alumni Luncheon during its Spring Reunion Weekend. The association has awarded the medals since 1978 to Carolina alumni and others.

Caudill, chair of the UNC Board of Trustees, graduated from UNC with a degree in chemistry and co-founded pharmaceutical-development company Magellan Laboratories. He has been a key supporter of science and entrepreneurship at UNC. The campus’s Caudill Laboratories is named for him and his wife, Susan Self Caudill ’80, and he is chair of the Chancellor’s Innovation Circle. He also is an adjunct professor of chemistry, a member of the chemistry department’s external advisory board and chair of the private-fundraising steering committee for the physical science complex. He is a member of the advisory working group for the entrepreneurship minor in the College of Arts and Sciences, is chair of the minor’s fundraising campaign and teaches in the minor.

Among his other involvements at UNC, Caudill is vice chair of the executive board of The Educational Foundation and was a steering committee member of the $2.4 billion Carolina First Campaign. In 2008, he received the University’s Distinguished Alumnus Award and in 2013 was inducted into the Order of the Golden Fleece.

Curtis, a member of the Board of Trustees, studied journalism and mass communication at Carolina before launching a cable television company. He is chair and chief executive officer of Curtis Media Group, which operates 32 radio stations in North Carolina, along with various news networks.

Curtis’ service to Carolina includes four years on the Board of Visitors and as a member of the National Development Council. He has served on the UNC Health Care System Board of Directors and continues to serve on the board of visitors of the School of Journalism and Mass Communication. Curtis serves on the executive committee of The Educational Foundation. In 2005, he received the William R. Davie Award from the trustees. He is a past chair of the GAA.

Frye was the first African-American to enroll as a first-year law student at UNC. He went on to become chief justice of the N.C. Supreme Court after becoming that court’s first black member. Along the way, Frye achieved several other milestones in the state as an African-American: He was the first to be appointed an assistant U.S. attorney, 1963; the first elected to the N.C. House in the 20th century, 1968; one of the first to open a bank in the state, 1971; the only one serving as a state senator during his term, 1981-82; and the first to be appointed to the state’s highest court, 1983. He became chief justice in 1999 and served in that position through 2000.

Now in private practice, Frye returns to UNC regularly to judge a moot court competition. He has been honored with UNC’s Distinguished Alumnus Award, its Davie Award and the UNC System Board of Governors’ University Award. He also received the Harvey Beech Award from the GAA’s Black Alumni Reunion.

Grumbles, who graduated with a history degree, retired from her career with Turner Broadcasting in Atlanta as corporate vice president of human resources, public relations and marketing. After retiring, she served as UNC’s interim vice chancellor of University development from 2012 to 2013 while a search for a permanent vice chancellor was underway.

Prior to that, her service to the University included co-chairing the Women’s Leadership Council during the Carolina First Campaign. She has served on the executive committee of the UNC Health Care System board and the Lineberger Comprehensive Cancer Center board of visitors. She chairs the advisory board for the Institute for the Arts and Humanities, belongs to the Chancellor’s Innovation Circle and, until this year, taught an introductory course in entrepreneurship. She also personally mentors women, informally giving guidance to students as they begin their careers and through a Bible study for Carolina seniors she leads in her home. She received the University’s Davie Award in 2012 and a 2013 Dean’s Award for Distinguished Service to the College of Arts and Sciences.

McAllister retired from the Army as a colonel and then, with a particular interest in combating heart disease, became a cardiac physician, researcher and professor in Texas. His financial support created the McAllister Heart Institute in UNC’s School of Medicine, aimed at attracting young cardiac researchers to the University.

McAllister has served as president of UNC’s Medical Alumni Association, on the University’s Board of Visitors and on the executive committee of the Medical Foundation of North Carolina. In 2013, he received the Davie Award from the trustees.

Outside of medicine, McAllister has an interest in art and has arranged substantial donations from his collection to UNC’s Ackland Art Museum as well as donating a heart-like bronze sculpture for the entrance to UNC Hospitals.