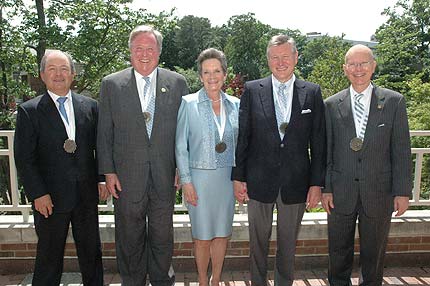 Carolina’s chancellor, two members of the Board of Trustees and a couple who last year made a major donation to the School of Public Health were recognized today by the General Alumni Association for their service and commitment to the University and the alumni association.

Moeser, who became UNC’s ninth chancellor in 2000, oversaw the $2.38 billion Carolina First Campaign; a campuswide building and renovation effort; and the launch of the Carolina Covenant scholars program, which enables high-achieving students from low-income families to graduate debt-free. The first class of Covenant scholars graduates this year at the last Commencement Moeser will lead as chancellor.

Perry, who is president of the development firm EastWest Partners in Chapel Hill, served on UNC’s Board of Visitors from 1995 through 1999. He was appointed to the Board of Trustees in 2003 and was elected its chair in 2007. He is a member of the Lux Libertas Society, which honors those who have donated $1 million or more to the University. He has served as vice chair of the committee searching for Moeser’s successor.

Carter, who is president of Atlantic Packaging in Wilmington, served on the Board of Visitors from 1997 through 2001, then took a seat on the Board of Trustees, where he has been secretary since 2005. He also served on the chancellor search committee and has been a member of the Morehead-Cain Scholars Selection Committee. In 2007, he and his family established the W. Horace Carter Distinguished Professorship at the School of Journalism and Mass Communication; the award is named for his father, the Pulitzer Prize-winning publisher of The Tabor City Tribune. In April, the Graduate School presented Carter with the Dean’s Award for Significant Contributions to Graduate Education. Over the years, Carter has shown his commitment to UNC as a Carolina Club president for Columbus County, as well as for New Hanover, Pender and Brunswick counties.

In 2006, Dennis and Joan Gillings endowed the Dennis Gillings Professorship in Biostatistics at the School of Public Health, where he was a biostatistics professor before founding Quintiles Transnational, which has grown into one of the world’s leading pharmaceutical services companies. Last year, the couple donated $50 million to help the school address the world’s pressing public health challenges. In their honor, this fall the school will be renamed the Dennis and Joan Gillings School of Global Public Health. In addition to their financial support, Joan Gillings serves as chair of the Board of Visitors of UNC-Wilmington, while Dennis Gillings has served on the Board of Visitors at Carolina and is active on the Dean’s Advisory Council of the School of Public Health, the Graduate Education Advancement Board and the Board of Directors of the UNC Health Care System.

The GAA has awarded the medals since 1978 to UNC alumni and others who have provided outstanding service to the GAA or the University. A list of previous award recipients is available online.