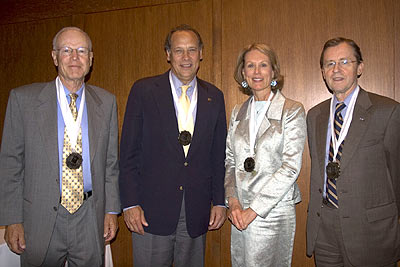 Four individuals were recognized today for their commitment to the University and the UNC General Alumni Association.

“Like previous recipients, those recognized this year with the GAA’s Distinguished Service Medal have provided outstanding service to our University and our alumni association,” Dibbert said. “We are grateful for their unselfish efforts and are inspired by their example.”

Beginning in 1967, Guthridge spent three decades as assistant coach alongside Dean Smith, then led the team as head coach to 80 wins and two Final Fours in the three years before he retired. In 1993, Guthridge and his wife, Leesie, created the William W. and Elise P. Guthridge Library Fund, which enabled the House Undergraduate Library to purchase much-needed humanities materials. The Guthridges also helped kick off the Undergraduate Library renovation campaign in 1998 by making a generous first donation toward the $2 million effort.

Harrington is the founding president of Stonebridge International LLC, an international strategic advisory firm based in Washington, D.C., and he serves as a trustee of the Kenan Institute for Private Enterprise. He was a Morehead Scholar at UNC. Harrington founded several companies, including Telecom USA, and was a partner in the international law firm of Hogan & Hartson. Harrington served on three of President Clinton’s intelligence advisory boards, and he was U.S. ambassador to Brazil from 1999 to 2001. Harrington and his wife, Hope, endowed a distinguished visiting professorship and study abroad program focused on Latin America at UNC.

Kitchin is president and CEO of Almand’s Drug Stores in Rocky Mount. She graduated Phi Beta Kappa from UNC, has served on the UNC Board of Visitors and on the UNC Board of Trustees as secretary, in addition to her current role as vice chair. She is a cookbook author and the producer and host of Tar Heel People.

Schwab, co-founder and managing director of the Charlotte-based merchant banking firm Carousel Capital, is the former chair and CEO of Paramount Parks, a leading developer and operator of regional theme parks. Schwab has served on the boards of visitors for both UNC and Kenan-Flagler Business School. He also has served on the Carolina First Steering Committee.

The GAA has awarded the medals since 1978 to UNC alumni and others who have provided outstanding service to the GAA or the University.