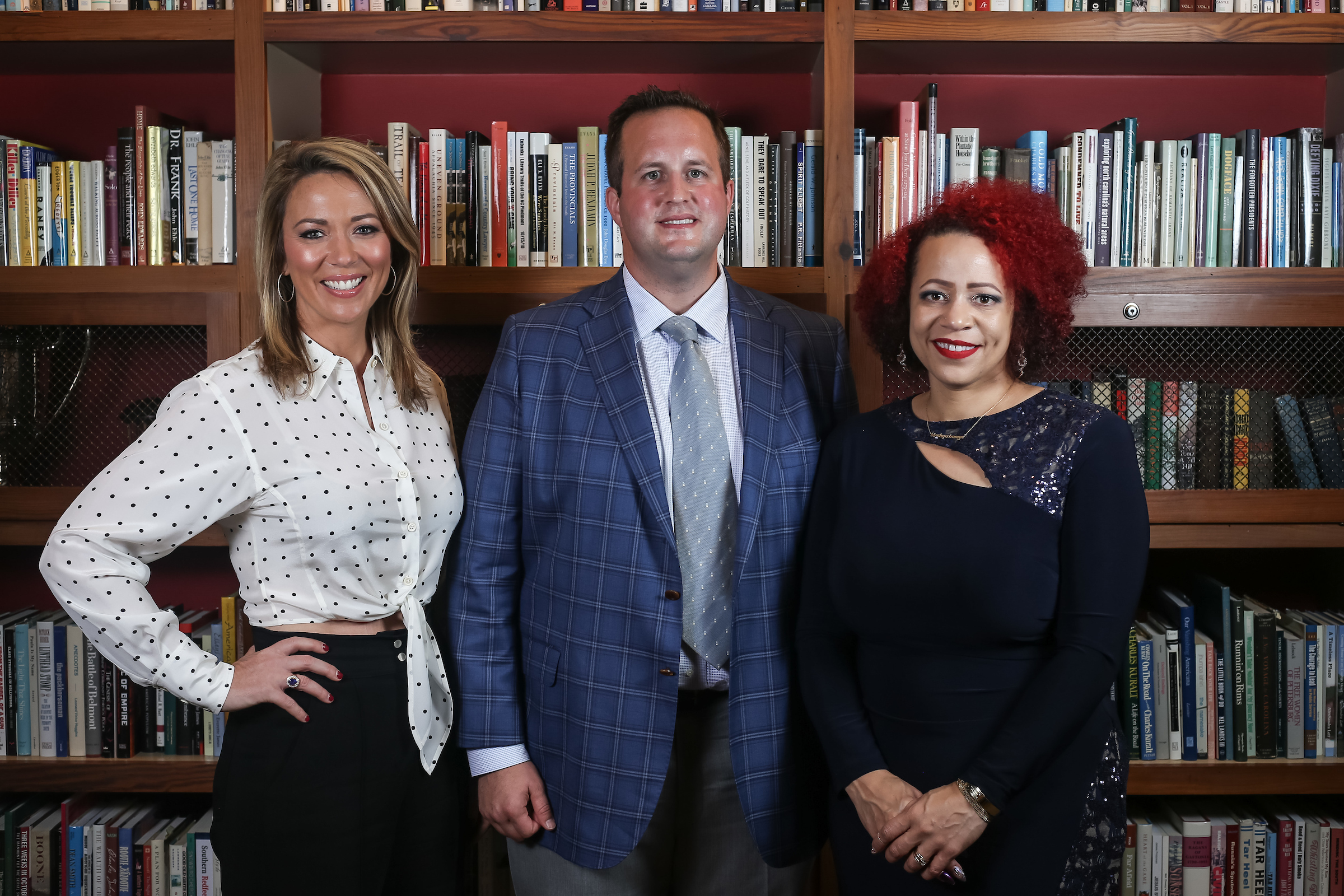 The GAA recognized two journalists and a nonprofit entrepreneur with its Distinguished Young Alumni Awards on Friday. The 2017 recipients are:

When CNN executive producer Eric Hall refers to anchor Brooke Baldwin as “a Swiss army knife of talent,” he’s talking about her ability to connect with a range of audiences, to shift emotions seamlessly from a heart-warming human-interest piece to a straight news report to a gut-wrenching breaking-news story. She also taps her breadth of knowledge to ask incisive questions of policy wonks or other experts. 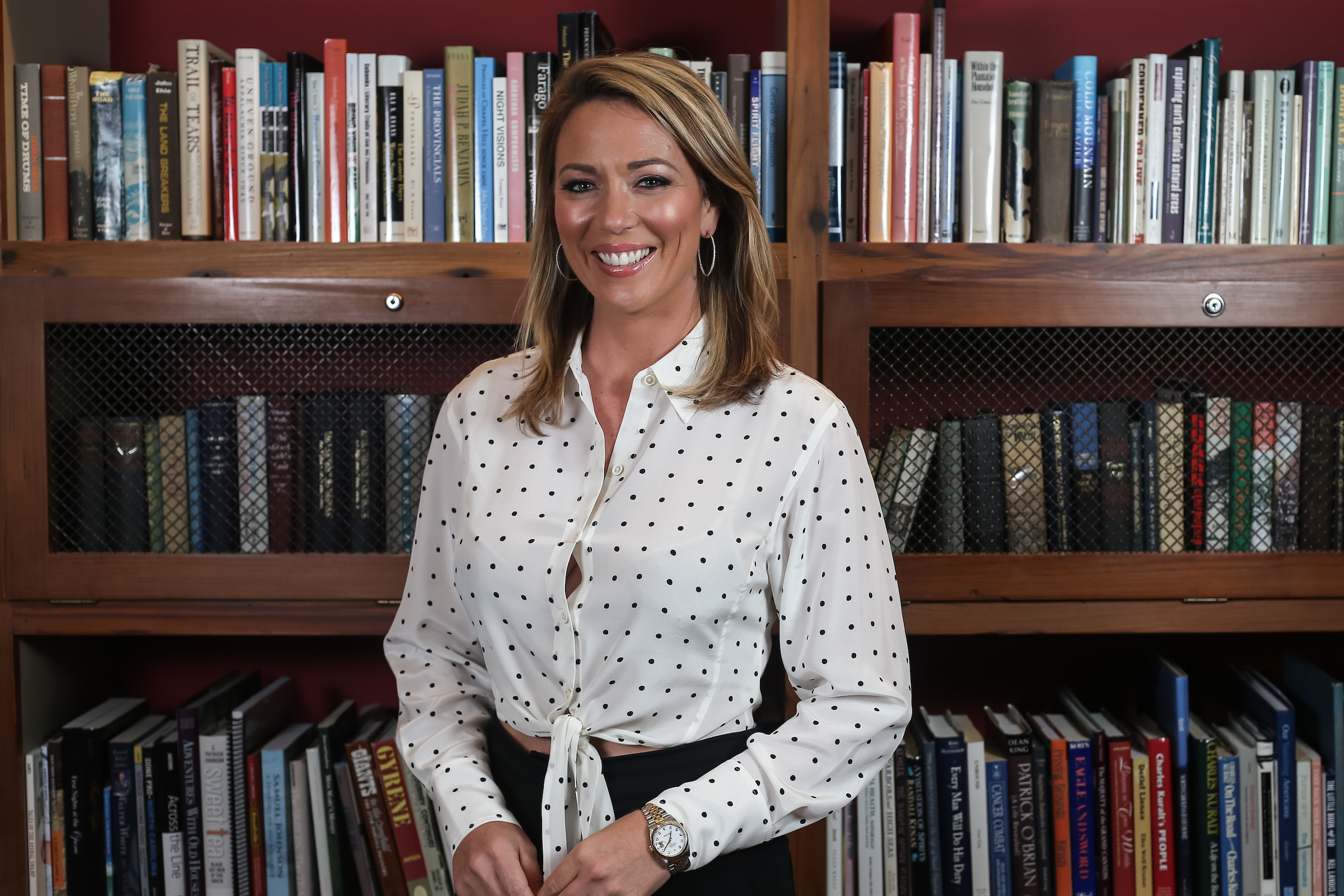 Baldwin also remembers the variety of skills she employed in her early days in broadcasting, when she would write the newscast script and then scroll the teleprompter with her foot under the desk to deliver it on air. She knows all too well the bumpy road from those do-it-yourself days to the glass tower of New York’s Time Warner Center, where she hosts the mid-afternoon shift of CNN Newsroom.

“Every day I walk into CNN and know that I am so lucky to have landed in a career path that totally jibes with who I am and what I love,” Baldwin said.

She almost didn’t take that path. On her way back to the College of William & Mary as a sophomore, she dropped a friend off in Chapel Hill. On impulse, she took a tour of the campus, and by the start of her junior year, she was enrolled in Carolina’s journalism school.

Another redirect came in the spring semester of her senior year, when Baldwin was the camerawoman for UNC-TV’s news show. Dana Rosengard ’02 (PhD), then a teaching assistant, pulled her aside: You belong in front of the camera, he said, not behind it.

“Brooke had a visual maturity about her,” Rosengard said. “She has a certain presence. … Brooke has never been average on the anchor desk. There is something about her presence, poise, command and control.”

Baldwin has covered top stories of the day, such as the shootings at an elementary school in Connecticut, the bombing at the Boston Marathon, a terrorist driving a truck through a crowd in France, the wars in the Middle East and the 2016 presidential campaign.

Baldwin was nominated for a Peabody Award after hosting a town-hall-style meeting of 40 people touched by gun violence. Twice she has been part of a Peabody Award-winning team at CNN — once for coverage of the 2008 presidential election and another time for the BP oil spill in the Gulf of Mexico. She won two Emmys as part of a news team covering breaking news. In 2012, the New York Festivals International Television & Film Awards bestowed on her its Silver World Medal for Best Investigative Report for her first hour-long documentary, To Catch a Killer.

Nothing builds leadership like holding in your hands the lives of hundreds of soldiers and the civilians surrounding their mission. A Ranger-qualified captain, platoon leader and battalion fire-support officer for the 173rd Airborne Brigade Combat Team, Nicholas Black fired 100 tons of ordnance in combat during his 27 months in Afghanistan — and without a single civilian casualty. 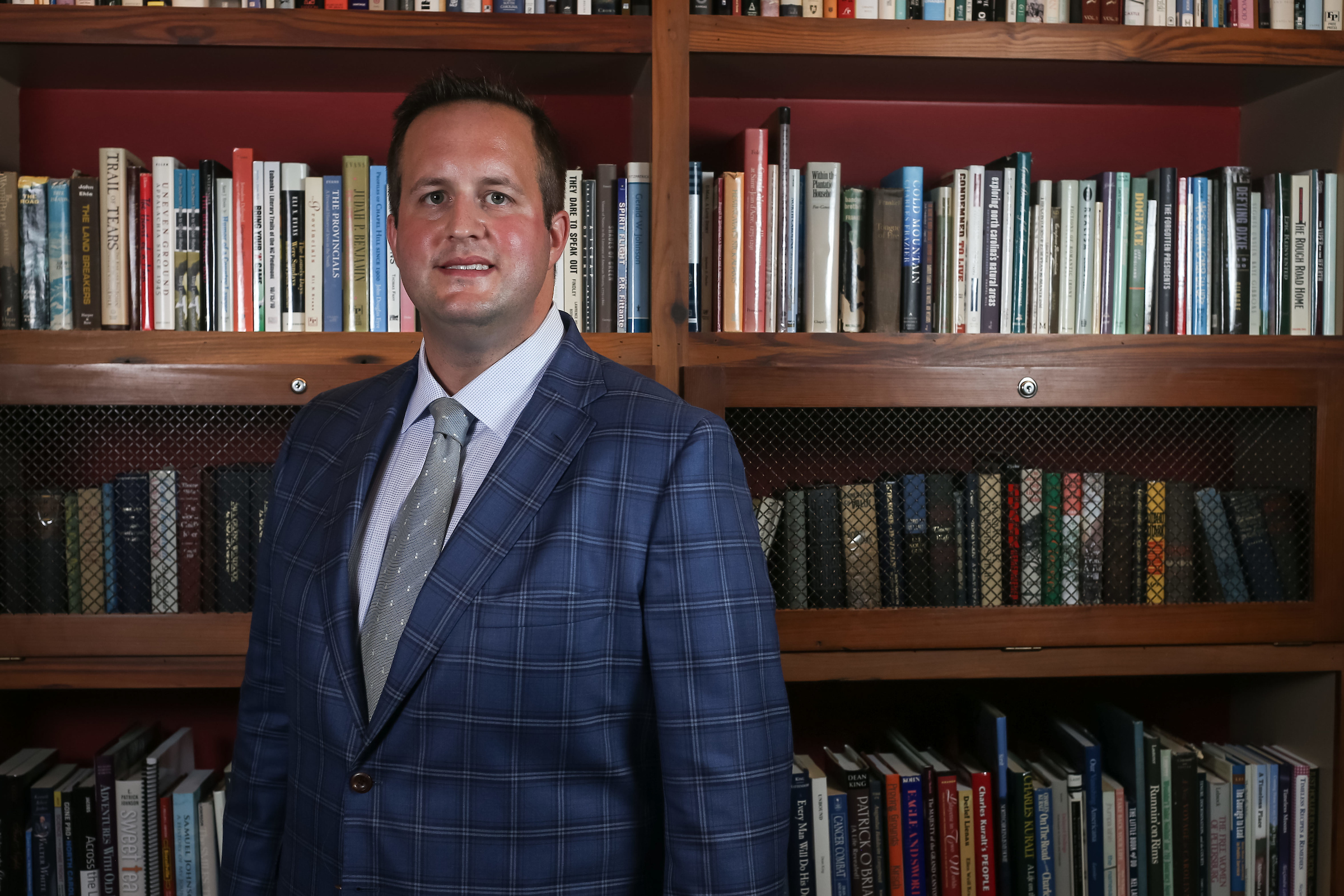 But while he completed his service with medals for valor and effectiveness, he saw that others had survived the battlefield only to bring home psychological trauma and issues with substance abuse, some so severe that they killed themselves.

Re-entering civilian life in 2011, Black partnered with two other veterans to found Stop Soldier Suicide, a nonprofit dedicated to preventing suicide among soldiers leaving the military and ensuring that veterans get other kinds of help. The national organization has more than 700 clients receiving case-management services and connects by phone and email to thousands more.

Founding partner Brian Kinsella said that with Black, “no mission is too big; no obstacle too small. He’ll find a way to make it happen. … People connect with him, and he connects with people.”

Black had applied to Kenan-Flagler Business School while deployed in Afghanistan, contacting Bob Connolly, an associate professor of finance who sent care packages — and Kenan-Flagler coffee mugs — to U.S. soldiers in combat areas. Black distinguished himself in his MBA program, receiving the Rollie Tillman Jr. Outstanding Leadership Award and being selected as a Kenan Institute Leadership Fellow.

“Nick was a paratrooper,” Connolly said, “and they’re not quiet sorts. Nothing is halfway, ever. If you’re going to do it, do it big. That’s his approach to everything.”

“Innovation sometimes is taking an idea or solution from one industry and applying it to another,” Black said. With two of his classmates from Johns Hopkins University, he organized Victory Social Capital, seeing the potential to scale a nonprofit through a public-private partnership investment model. His team restructured a 500-person therapeutic community that led to an additional $8 million in public investment.

Black showed his entrepreneurial flexibility when one effort didn’t work out because of customer-service issues beyond its control. The business evolved into the nonprofit GoodUnited, where he is CEO. The venture-backed startup uses automated email-personalization technology to bring donors and nonprofits together, similar to the Pandora music-streaming service but for philanthropists, using technology to suggest what they might want to do next, based on their previous interactions.

“I’m really good at chasing problems,” Black said. “I’m good at learning, not through being smart but by running into walls, experiencing things and getting better.”

It’s all part of an ongoing mission.

“The ultimate driver,” Black said, “is thinking about guys I served with who don’t have the opportunity to do what I’m doing. That’s a constant reminder for me to take that risk, because they can’t.”

Nikole Hannah-Jones: It’s Personal, for Her and for Readers

Nikole Hannah-Jones and her husband, Faraji, disagreed about where to send their daughter to school. What for most couples would have remained a private family matter instead played out in a long feature in The New York Times Magazine, where she is a staff writer focusing on racial segregation in schools. 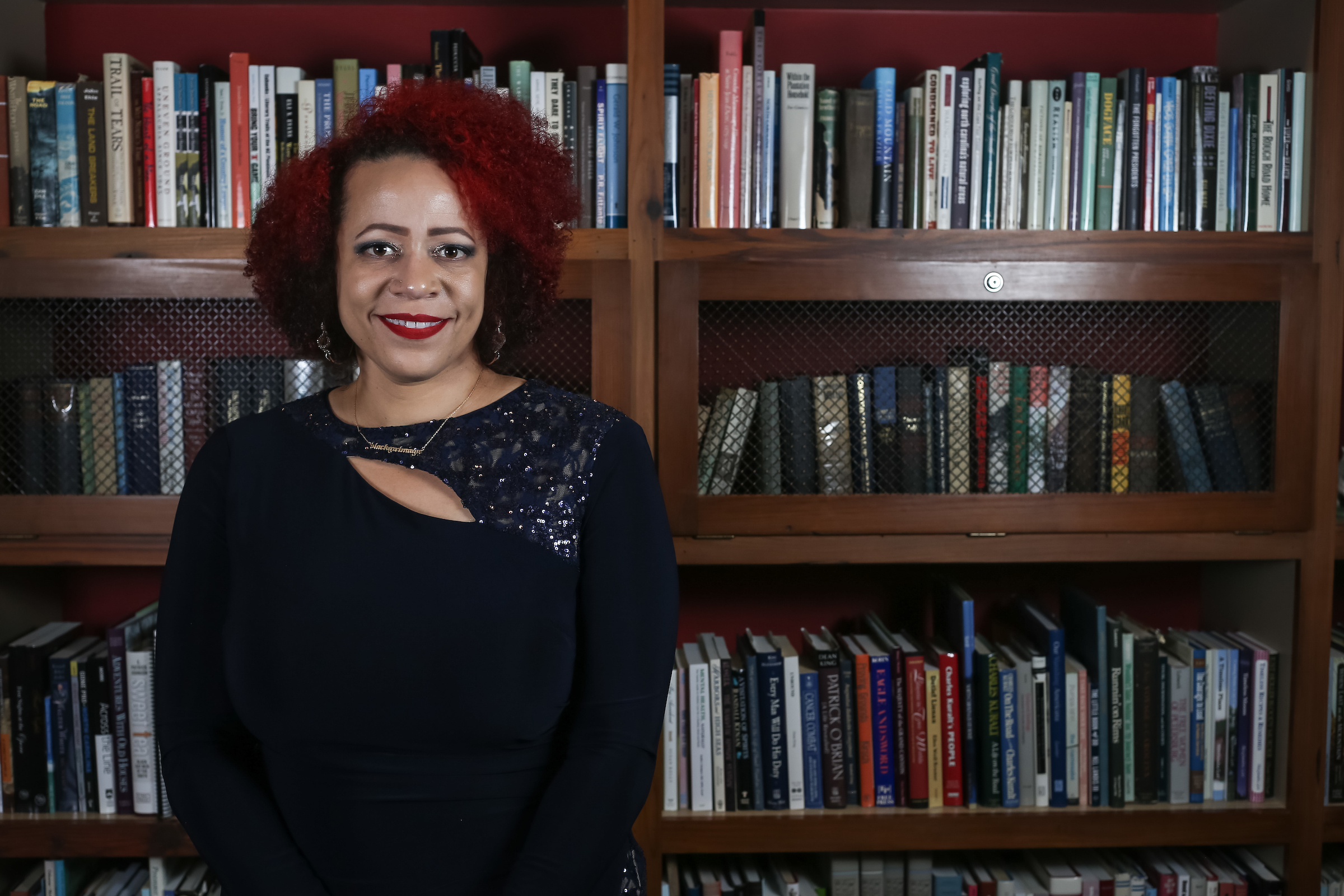 The debate over whether to enroll their daughter in a majority black school or majority white school forced Hannah-Jones and her husband to turn theory into practice. She laid out her own experiences as a black child in a predominantly white school in Iowa, and the history of segregation in the North and in the New York City public schools. Her story won the National Magazine Award and other recognitions.

NYT Magazine Editor Ilena Silverman said she heard from a parent a year later who was using the story to help make the best decision for her child. “The story still had relevance,” Silverman said. “As an editor, that’s exciting. You hope the things you publish may change policy or cultural understanding.”

For work with such personal appeal and societal impact, the MacArthur Foundation this week named her a MacArthur Fellow, more commonly known as the “genius grants.”

After majoring in history and black studies at Notre Dame, Hannah-Jones accepted a Park Fellowship at UNC’s journalism school for her master’s. In The News & Observer’s Durham bureau, she covered education and realized that while school segregation was at the root of almost every inequality in society, “most reporters were not covering it.”

“I felt it was important. If you were going to write about the achievement gap and racial and economic inequality and you ignored the fact that schools were getting increasingly segregated, you weren’t doing your job.”

Her reporting dug deeply into data and provided historical context. At The Oregonian in Portland, she covered civil rights, segregation, fair housing and economic justice. She remained focused on those issues when she moved on to the investigative journalism site ProPublica and then The NYT Magazine.

Hannah-Jones received a Peabody Award in 2016 for her episode of the public radio show This American Life addressing school desegregation and the achievement gap between black and white students; “The Problem We All Live With” took its title from a 1964 Norman Rockwell painting depicting a small black girl being guarded by U.S. marshals as she goes to an integrated school. Among many other accolades, the National Association of Black Journalists named her Journalist of the Year, and The Root magazine listed her among its 100 Most Influential African-Americans.

Hannah-Jones has co-founded a training and mentorship organization to increase the number of investigative reporters of color. The Ida B. Wells Society, named for an African-American journalist in the late 1800s who crusaded against lynchings, recently celebrated its first anniversary and has more than 700 members.

Hannah-Jones is on leave from the Times to write a book that traces the struggle of equal education for black children since slavery.

Video: Hannah-Jones talks about her work in a video for the MacArthur Foundation.
Audio: Listen to “The Problem We All Live With” on This American Life.