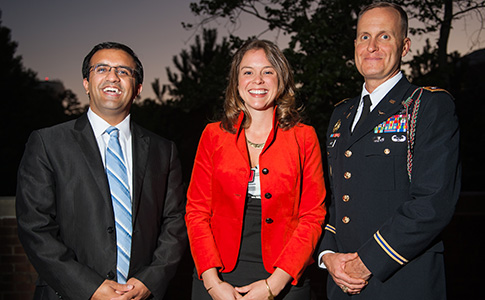 Two founders of nonprofits aimed at improving lives in Africa and a military officer who as a student led efforts to establish an Army ROTC unit at UNC have been honored with the GAA’s Distinguished Young Alumni Awards for 2014.

Dr. Rajesh Panjabi ’02 (’07 MD) of Morrisville, Callie Brauel ’09 of Chapel Hill and Lt. Col. Richard Martin ’95 of Fort Riley, Kan., received the awards at a banquet Friday at the George Watts Hill Alumni Center. This is the 26th year the GAA has presented awards recognizing alumni age 40 or younger for bringing credit to the University through their achievements.

“The remarkable accomplishments of many of Carolina’s younger alumni such as Rajesh, Callie and Richard are truly inspiring,” said GAA President Douglas Dibbert ’70.

Panjabi is founder of Last Mile Health, which trains villagers to deliver health care services aimed at combating life-threatening diseases in remote parts of his native Liberia. As a child, Panjabi fled Liberia’s civil war with his family and settled in High Point.

While an undergraduate at UNC, Panjabi spent a summer studying Alaska’s system for delivering health care to remote areas and used it as a model when establishing Last Mile Health after graduating from medical school. As a medical student, he worked in Liberia helping rebuild the health care system following the civil war. Last Mile Health, working with Liberia’s government, has trained workers in more than 40 villages and has a goal of expanding to 300.

Besides his chemistry and medical degrees from UNC, Panjabi also holds a master’s degree in public health from the Johns Hopkins University. He is on the medical staff of Brigham & Women’s Hospital in Boston and the faculty of Harvard’s Division of Global Health Equity.

Brauel co-founded A Ban Against Neglect, which provides vocational and life-skills training to young mothers so they can support themselves and their children. During a semester studying at the University of Ghana, Brauel and two of her fellow students there came up with a plan for how homeless women could make purses from the discarded plastic drinking-water sachets littering the streets and sell them.

Upon returning to UNC, the New Hampshire native — who earned degrees in business administration and economics — enrolled in Kenan-Flagler Business School’s Launching the Venture entrepreneurial program to polish the business plan. She then used the $15,000 prize money her pitch won in the Carolina Challenge start-up competition to found ABAN.

Now in its fifth year, ABAN meets its $400,000 annual budget through grants, donations and sales of products made by the women in Ghana. ABAN has a staff of four in the U.S., all UNC alumni, and 17 in Ghana, providing training and other services for 20 to 30 women a year. Brauel was featured as one of seven “Change Agents” — alumni who had tackled some of the world’s biggest problems and had advice to share with others — in the Carolina Alumni Review’s May/June 2012 issue.

Martin, who graduated with a sociology degree, is the first officer from UNC’s Army ROTC program to become a battalion commander. He has led troops through three tours of duty in Iraq and one in Afghanistan.

Throughout his career, Martin has been tapped for highly selective programs, including the School of Advance Military Studies and the Command and General Staff College, where he graduated No. 1 in his class of 1,100. He received the George C. Marshall Award for leadership from the Army chief of staff.

When the former Morehead City resident joined Army ROTC as a sophomore, he had to travel to Duke University for military classes and training. UNC became the only campus to launch an Army ROTC program in the 1990s after Martin inspired enough fellow Carolina students to become cadets. Martin served as the cadet officer in charge. Today, the program commissions more officers than the campus Air Force or Navy ROTC units and is recognized as one of the top programs in the country.