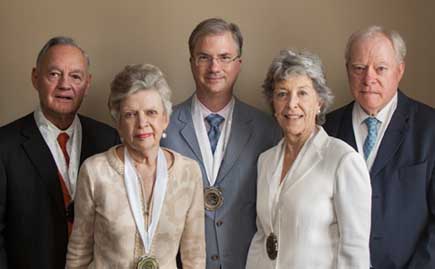 The GAA has honored the chancellor and his wife and two other couples who have supported a broad range of campus initiatives for their outstanding service to the University and to the association.

The medals were presented Saturday at the GAA’s annual Alumni Luncheon during its Spring Reunion Weekend. The association has awarded the medals since 1978 to Carolina alumni and others.

Holden Thorp, who graduated with a degree in chemistry, returned to the University in 1993 as a chemistry professor after getting his doctorate at the California Institute of Technology and teaching at N.C. State.  He was appointed director of the Morehead Planetarium in 2001, revitalizing it into a more broadly based science center before he returned to teaching as chair of the chemistry department. In 2007, he became dean of the College of Arts and Sciences; the following year, he became Carolina’s 10th chancellor.

During his tenure as chancellor, the University has moved into the top 10 nationally in federal funding for university research. He also has been recognized for taking a leading role in improving relations between the campus and the towns of Chapel Hill and Carrboro, especially in regard to development, such as the Carolina North campus and the 123 West Franklin project. He has served on the GAA Board of Directors as a faculty member and, in 2002, received the association’s Distinguished Young Alumni Award.

Patti Thorp, who earned a bachelor’s degree from UNC-Greensboro and master’s in theater management from Yale University, has chaired the Friends of PlayMakers Advisory Council and served on UNC’s Arts Innovation Committee and the Carolina Women’s Leadership Council. She has been a champion for many community projects related to the University, including fundraising drives for UNC’s Children’s Hospital and Habitat for Humanity’s Build-A-Block initiative, which in one year built 10 homes for UNC employees.

Holden Thorp announced last year that he would step down as chancellor at the end of June. The Thorps will be moving to St. Louis, where he will become provost of Washington University on July 1.

Knox Massey and Kay Weatherspoon are brother and sister, and their families have jointly supported programs at UNC, such as the Massey Awards that honor University employees whose extraordinary service rarely is acknowledged outside their own departments, and a professorship at the Kenan-Flagler Business School, both in honor of their father, C. Knox Massey Sr. ’25. The Masseys and the Weatherspoons also support the Carolina Seminars, bringing to campus distinguished speakers such as Nobel laureate Elie Wiesel and novelist Tom Wolfe to lecture on a wide spectrum of topics.

Knox Massey, who earned a business degree, and Mary Ann Massey, who earned a degree in education, were among the charter board members of UNC’s Institute for the Arts and Humanities and helped establish the Ruel Tyson Distinguished Professorship in the College of Arts and Sciences in honor of the institute’s founder. Knox Massey has served on UNC’s Board of Visitors and the GAA’s Board of Directors, and in 2008 he received the UNC Board of Trustees’ William Richardson Davie Award, its premier honor for service to the University.

Van Weatherspoon, who attended UNC on a football scholarship and earned a business degree, and Kay Weatherspoon, an alumna of Hollins College, established two endowed neuroscience professorships to honor their son, Van Weatherspoon Jr. ’84, who succumbed in 1989 to a brain tumor; the Weatherspoon Family Brain Tumor Research Award,  recognizing faculty members and researchers who have made significant contributions to brain tumor research; and a professorship in pathology and laboratory medicine to honor Nobel laureate Oliver Smithies for his discoveries that laid the foundation for current research into gene therapy.

The Weatherspoons also support the Weatherspoon Lecture Series in the business school and provided the means for the UNC Library to purchase the 20,000-plus Russian books, serials, manuscripts and photographs comprising the Savine Collection, among other contributions to libraries and the fine and performing arts at UNC. Van Weatherspoon has served on the UNC Board of Visitors and been honored with the business school’s BSBA Alumni Merit Award in 2001 and Leadership Award in 2004. In 2003, the UNC trustees presented him with the William Richardson Davie Award.