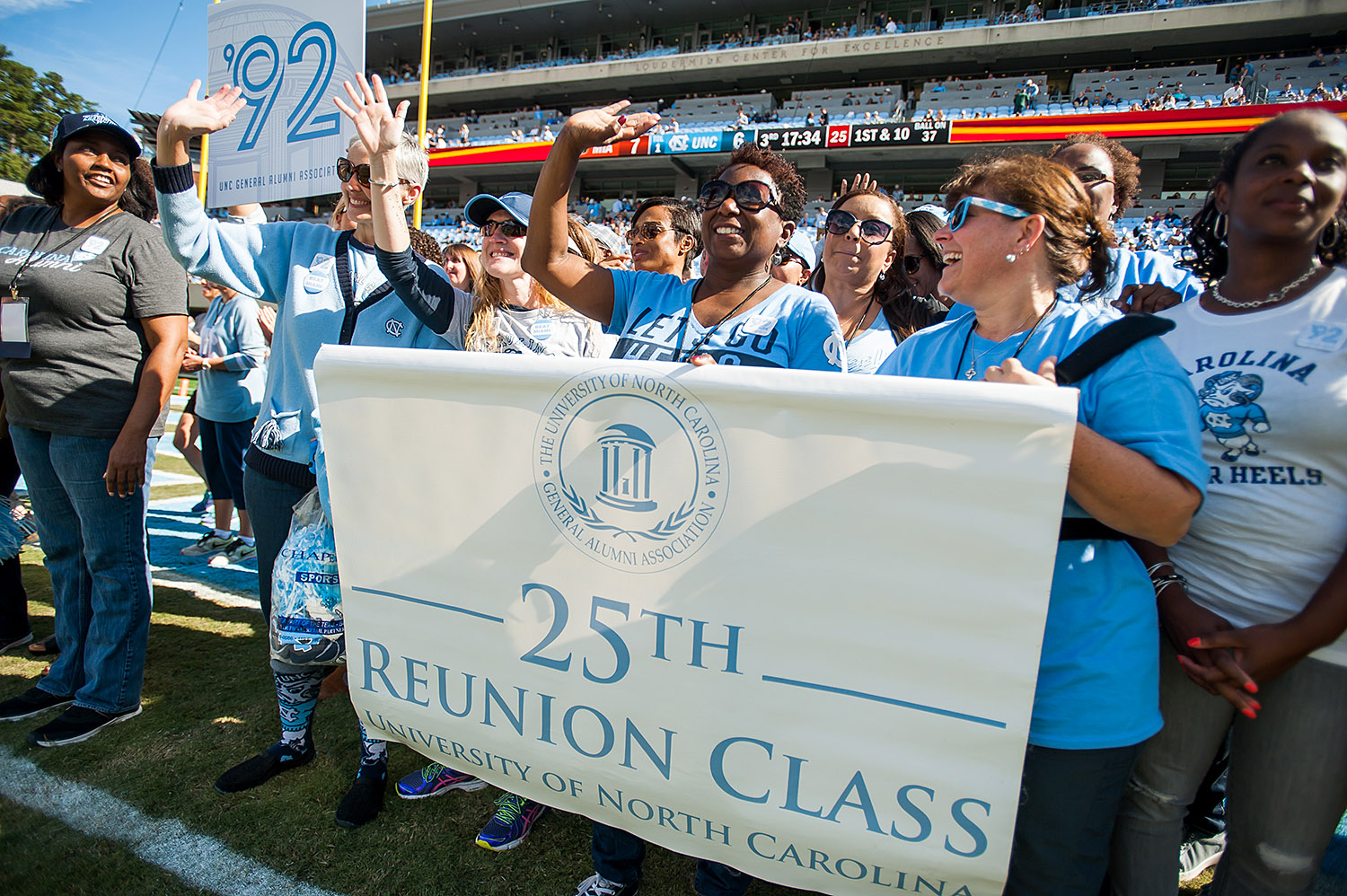 The Homecoming halftime recognition for the class celebrating the 25th anniversary is a recent tradition, organized by the GAA. (Photo by Shane Snider)

The Homecoming 2017 highlight for dozens of alumni from the class of 1992 came during halftime of the football game in Kenan Stadium, when they took to the field — and showed up larger than life on the Jumbotron — to be greeted with adulation by Tar Heel fans.

Chris Languell ’92 of Charlotte knows what it feels like to stand before cheering crowds. Originally from Dallas, Texas, he was recruited to UNC to swim. But Saturday’s halftime appearance was different. “It was fantastic,” he said. “It’s the first time I’ve ever been on the field in Kenan Stadium.”

The Homecoming halftime recognition for the class celebrating the 25th anniversary is a recent tradition, organized by the GAA.

Shannon Stewart ’92 drove up from Myrtle Beach, S.C., to reconnect with friends and to wave to the crowd from the field. “I didn’t want to miss this opportunity,” she said. “The next time we can do this will be our 50th.”

Alumni and friends enjoyed a full weekend of activities at Homecoming 2017.

They were among the hundreds of alumni from many classes, their families and friends who came out on a seasonably warm and sunny October morning to tailgate before the game. Many worked up an appetite for the rise-and-shine-and-dine barbecue buffet by climbing the Bell Tower.

A Tar Heel in any color

Just about everyone was bedecked in Carolina blue — but not Phillip Graham ’88. He tucked into a plate of crispy fried chicken and slaw while wearing his deep-purple Omega Psi Phi fraternity shirt. But Graham, who hasn’t missed a Homecoming game in the past 15 years, had a plan to show he was true blue.

“As soon as I eat, I’m going across the street to Student Stores and get my Carolina hat,” said Graham, who was a Tar Heel before he enrolled at UNC or came back for a master’s degree (’95 MPH) and doctorate (’99 DRPH). He grew up in the tiny town of Tar Heel, N.C. (population 143, after he left). 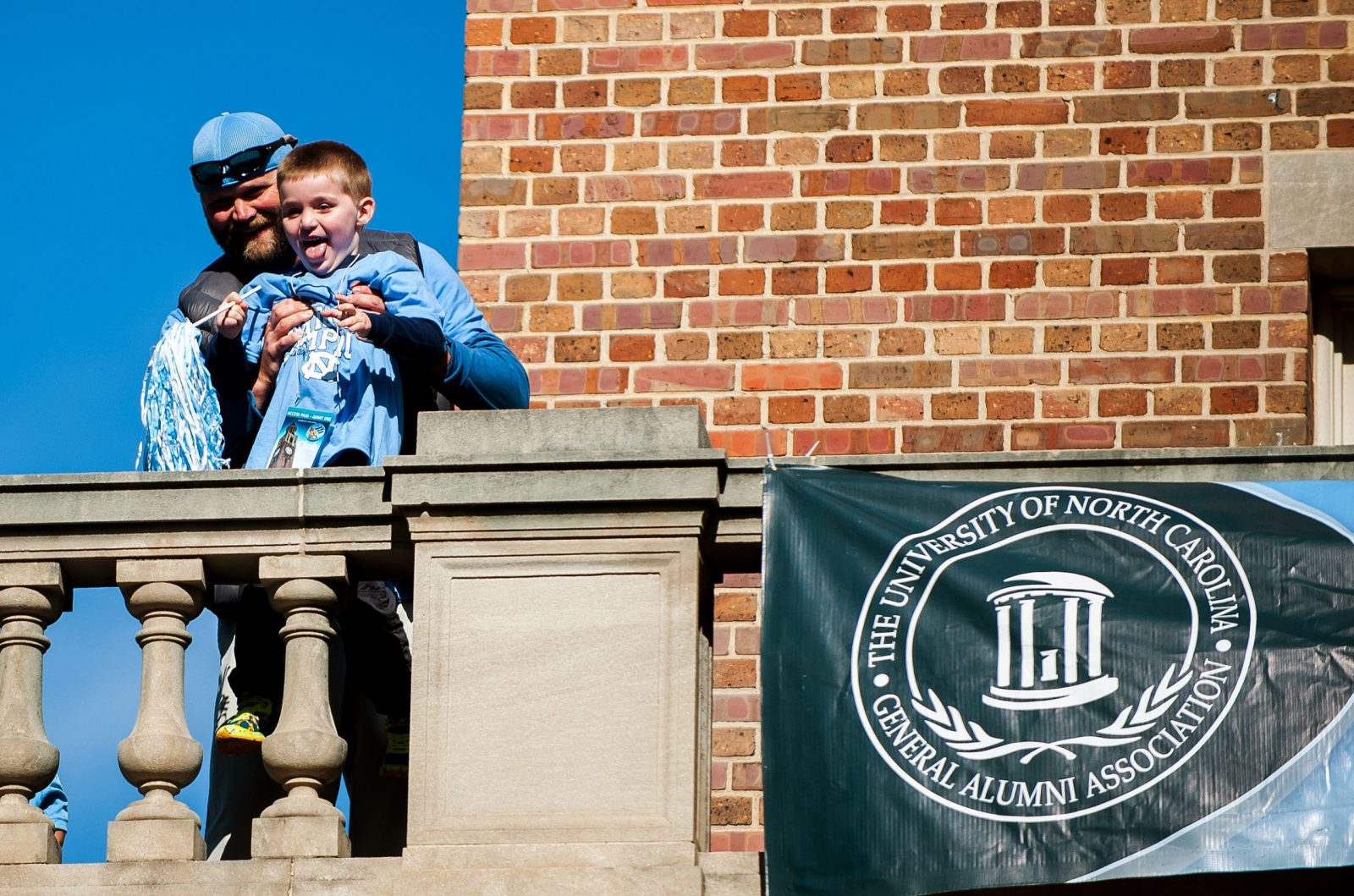 Denise Williams-Zimmerman ’92 of Rocky Mount has come back to Chapel Hill for every reunion in the past quarter century, and she’s noticed Carolina’s growth. “Every time I come back, it’s like they’ve built up campus more and more,” she said. “It keeps going. I can hardly recognize it.”

Bring a friend, find a friend

For several alumni, their 25th graduation anniversary reunion was also their first. Though Shelley Kittrell Forrest ’92 lives in Apex, she had never come back to a reunion until her friend Wendy Ross Rietvelt ’92 of Raleigh coordinated their signing up for this year’s festivities.

On the other hand, Christa Lauffenburger ’16 of Durham has perfect attendance at Homecoming as an alumna. She and Tori Holmes ’16 of Cary, both nurses at Duke Medical Center (“Duke was the first place to call back with a job offer,” Holmes shrugged), tailgated together.

LaTonya Hinton ’00 of Durham had a strategy for finding old friends: volunteer at the Black Alumni Reunion tailgate. Hinton — a middle-school principal who also has a master’s degree in school administration from Carolina (’09) — comes back to Homecoming every year, and she said taking tailgate tickets was “a good way to see people you haven’t seen in a long time.”

‘We all kind of discover who we are’

Dawn Bryant ’95 and Jamie Coll ’95 require regular doses of Tar Heel sports. They have been friends since high school in Greensboro. Bryant now lives in Myrtle Beach, S.C., but traveled back to Greensboro for the weekend, and the two came to tailgate together.

Coll grew up going to Carolina games. Her father was a season ticket-holder, though not an alumnus. “Carolina has been in my blood since I was little,” she said. “I applied to other schools, but I couldn’t see myself going anywhere else.”

Bryant has painted her house Carolina blue and educates South Carolinians in her orbit that “Carolina” doesn’t refer to that school in Columbia, S.C., only to the one in Chapel Hill. She said she and Coll try to go together to at least one football game and basketball game each year, regardless of the teams’ records. And her affinity to Carolina goes beyond sports.

“We all kind of discover who we are in college,” she said. “This is a place that reminds me of figuring it all out.”

A Tar Heel for the long haul

Mike Rogers ’86 shows his devotion to his alma mater by waking up at 3:30 Saturday morning to drive from his home in Laurel, Md., and arrive in time for the tailgate. “This is breakfast and lunch for me,” he said, finishing the last of the baked beans on his plate.

Rogers comes back for the friendships more than the football. “It’s a chance to reconnect with my fraternity brothers at Phi Beta Sigma and other friends,” he said. “I had the opportunity to interact with so many phenomenal people. Campus Y and a lot of different clubs helped me form lifelong friendships with guys I continue to stay in contact with long after my time here.” 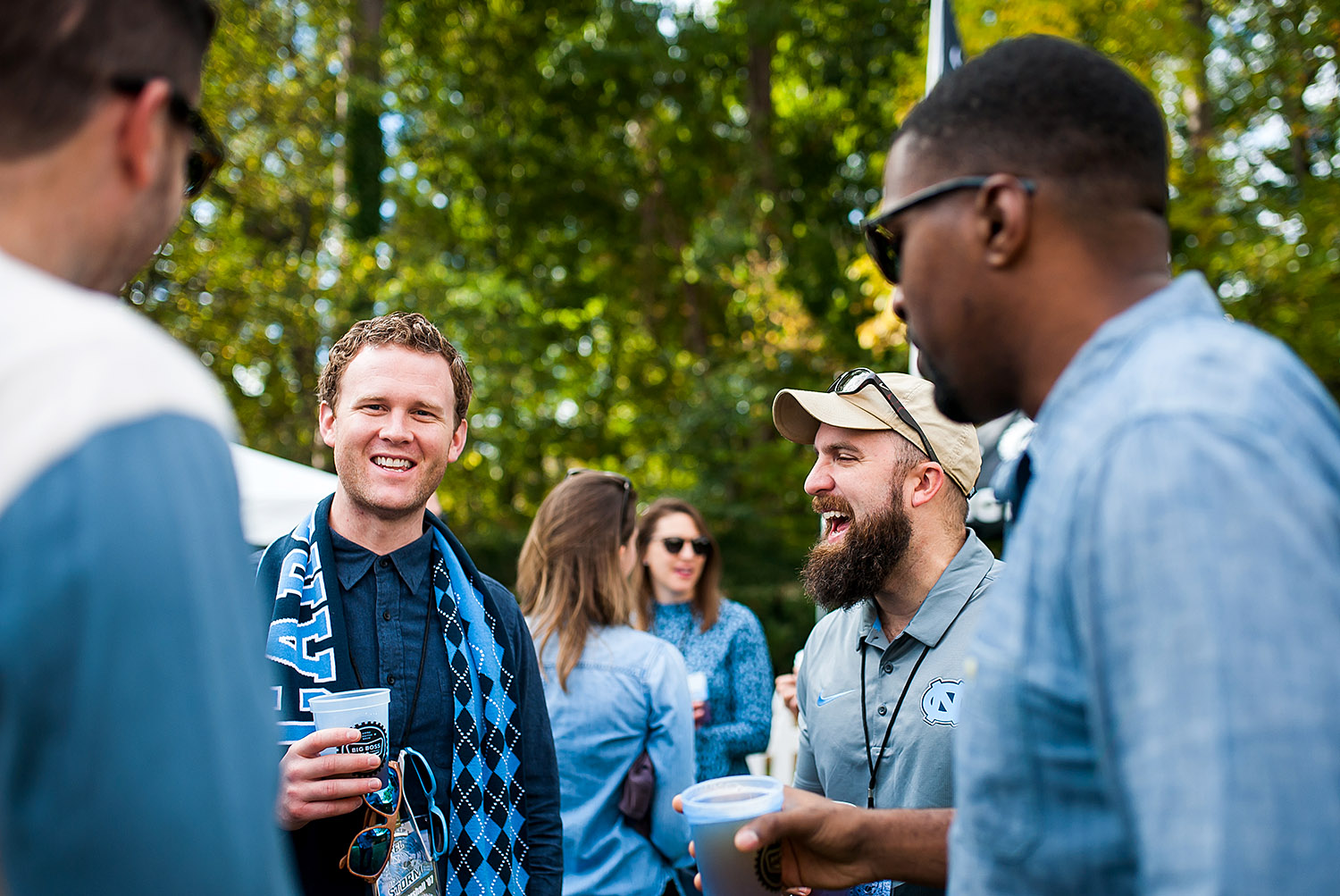 ‘Bring something extra to the table’

Dr. Eddie Hoover ’65 of Charlotte and his family have built a three-generation legacy at Chapel Hill. “The University has been very good to us,” he said. “We’ve been very successful. People see the examples we’ve set.” He lists a number of Black Pioneers — Carolina’s earliest African-American alumni — who have used their Carolina degrees to launch careers as doctors, lawyers, executives, judges and politicians. “They know they can come to Carolina and be whatever you want to be.”

Hoover mentors teens and encourages them to get involved in clubs or volunteer activities before they think about applying to college. “If all UNC wants is smart kids, a computer could take the class,” he tells his charges. “To get to a place like Carolina, you have to bring something extra to the table.”

On the right track

If 15-year-old Kenydi Davis-Scott has her way, she’ll be the second generation in her family to acquire a Carolina degree. Her mother, track and field team member Maia Davis Makal ’02, brought Kenydi to Homecoming for the first time this year, leaving their home in Gambrills, Md., Friday after school, because Kenydi didn’t want to spoil her perfect attendance record. Makal knew by age 10 she wanted to be a Carolina grad, and her daughter feels the same way.

“I really wanted to come for my birthday, and my mom made it happen for me,” Kenydi said, blinking back tears. “My No. 1 reason for going to Carolina is because my mom went here, and it’s a really good school.”

‘Something you want to be part of’

Kim Lawing Collins ’88 and her husband, Jon Collins ’87, of Durham haven’t missed a Homecoming in 15 years. They are strong supporters of the football team, “for better or worse,” Kim said, and her husband added, “Today maybe for worse; Miami is a good team.” (It turned out to be a close game, but Miami won 24-10.)

But the reasons they encouraged their daughter Elyssa, now a junior, to enroll centered on academics and intangibles. Jon works with universities and professors across North America, and he has “been impressed by the academic excellence of Carolina, consistently, year-to-year. And it’s a public university, not a private one.”

Kim cited the culture of Carolina: “It’s something you want to be part of,” she said. “Carolina teaches you so much on so many different levels. You learn a lot in the classroom and in growth experiences outside of class. We told our daughter she would be surrounded by people who were as smart as she was, so get ready.”

Jon added: “We also told her to study hard and have fun. Make friends. Get involved. It’s a special time in your life. Take time to sort out what you’re excited about, what you’re motivated by, what you want to do for the rest of your life.” 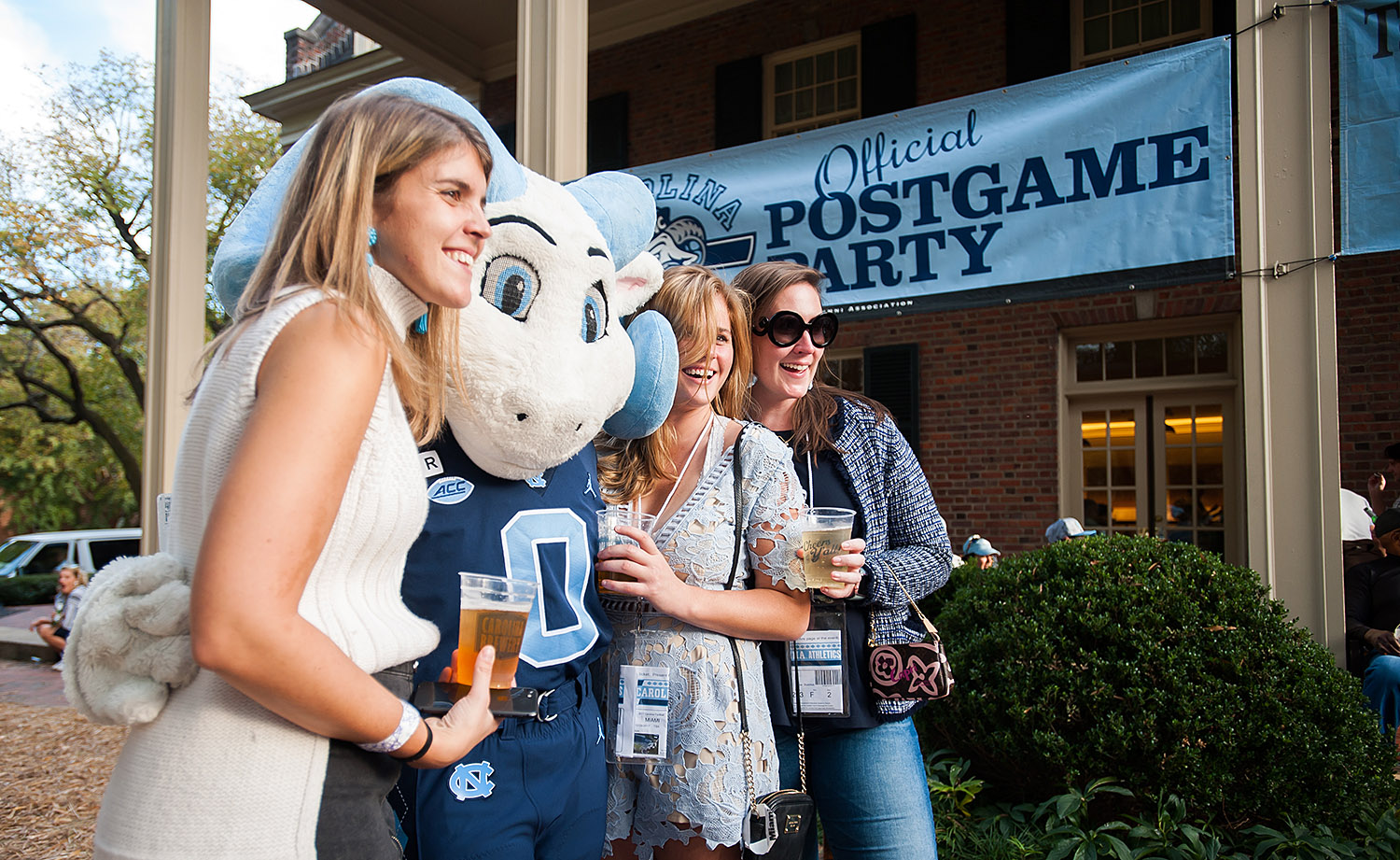 Heber “Earl” Tucker ’76 made the trip from Marietta, Ga., for Homecoming, as he has for the past five years or so. He acknowledged that the Heels have struggled this season. “But you don’t change your blue blood just because they’re not winning,” he said.

Tucker learned that doggedness by putting himself through college at Carolina by selling dictionaries every summer, going door-to-door 12 hours a day, six days a week, in the heat and humidity of Louisville, Ky. “It trained you for hard things and not to quit; never quit, no matter how hard it gets,” he said.

He put that work ethic to use first as a career Navy officer, then as a postal carrier. One particularly icy day, his supervisor said, “I don’t think you’ll make it out there, but go ahead and try anyway.” Tucker did, because, “no matter the obstacles, you’ve got to deliver.”