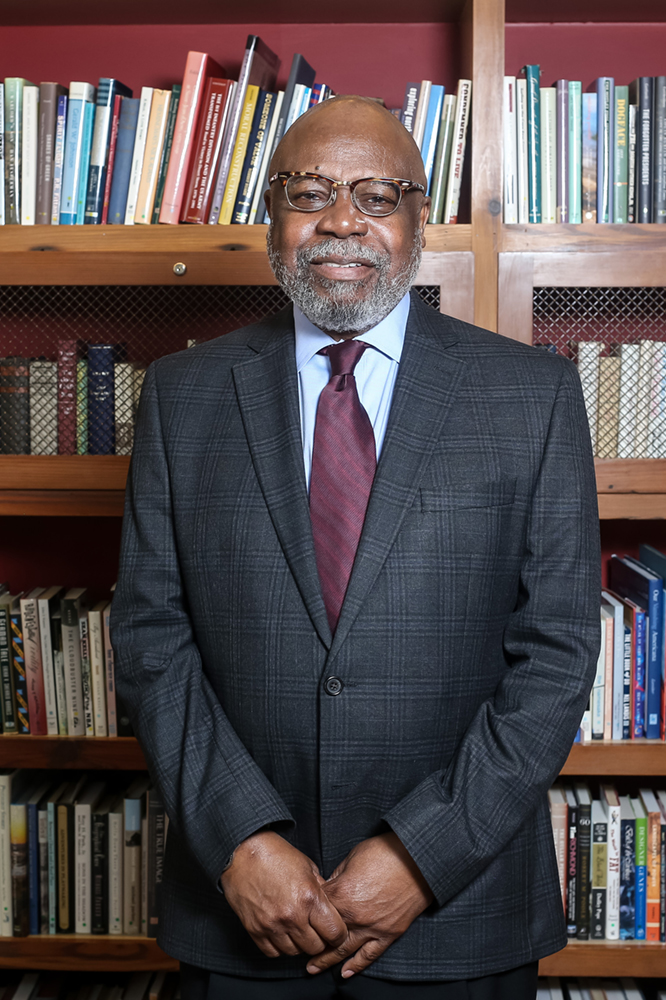 Joseph Jordan noticed when a student who stopped by during his office hours seemed as interested in the bowl of Hershey’s kisses he keeps on his desk as in talking to him. Joseph tactfully asked some questions and confirmed that the student was food insecure. He helped her get meal vouchers and asked her to return to his office later, whereupon he handed her a large bag of healthy snacks.

She wasn’t a student he taught, but she was a student who taught him something he needed to know.

As vice provost for academic and community engagement, Joseph oversees 16 centers and institutes at Carolina and still directs the Sonja Haynes Stone Center for Black Culture & History, as he has for the past 20 years. He also teaches in the department of African, African American and diaspora studies, focusing on social justice movements and cultural politics in the diaspora. He curates exhibits, publishes widely, organizes conferences and serves on a number of local and international boards. Among them is the chancellor’s Commission on History, Race and a Way Forward. He served on a similar commission when he arrived at UNC in 2001.

His door is always open to students, welcoming those of color in particular to the “family” of the Black community at Carolina. He came from a background that was not privileged. People helped him along the way, and he’s paying it forward.

Sitting in his office that is beautifully decorated with Black cultural artifacts, he talks with students about campus culture, challenges them and shares his experiences as well. As one student said: “It’s like talking to an uncle, but way more cool.”

Joseph speaks out about injustices. He advocates for students, faculty and staff to make sure their voices are heard. He has a powerful presence and a deep laugh that can fill up a room. He helps channel their energy and talks through their plans for changing what needs to be changed. He connects them with people who could help them reach their goals. Yet he keeps their sense of urgency in perspective, telling them, “What’s the rush? Leave room for magic in your life. Life will surprise you; you don’t have to control everything.”

He creates opportunities for students they wouldn’t have otherwise. Like the time he bought a book for a student interested in an organization, then invited the author to speak at the Stone Center, then arranged for the student to have dinner with the author and learn firsthand about the author’s experiences. Or the study opportunities in Colombia, Puerto Rico and Trinidad, along with a study abroad fellowship for students from underrepresented communities. Or any number of letters of recommendation he has written.

Joseph grew up in New York during a time of activism in the 1960s and ’70s. His family’s roots in the Caribbean attuned him to the reach of the African diaspora. After degrees from universities in Virginia and Ohio, he earned a doctorate in African studies from Howard University. He remained in Washington, D.C., as a senior research analyst at the Library of Congress, then taught at Antioch University in California and Xavier University in Ohio. Prior to joining UNC’s faculty, he directed the Auburn Avenue Research Library on African American Culture and History in Atlanta.

While the battle to create a freestanding center at UNC for Black culture and history was long and arduous, Joseph has devoted himself over the past two decades to ensuring that the center is more than a building. He has expanded programming to make sure it’s a vital part of Carolina’s identity. He launched an annual series of groundbreaking symposia of overlooked Black cultural icons, and he debuted photo exhibits, films and theater performances that went on to national prominence.

As a member of the chancellor’s Commission on History, Race and a Way Forward, Joseph doesn’t waver on his principles, even though he knows his advocacy for doing what’s right is not without risk to his professional standing. That’s when he relies on his exchanges with students, who stop by to talk, argue, laugh and encourage him when he’s feeling underappreciated; they convince him his work is worthwhile.

“I love and cherish them for it,” he says, “even those who disagree with me 99.99 percent of the time. They are what I strive to be.”