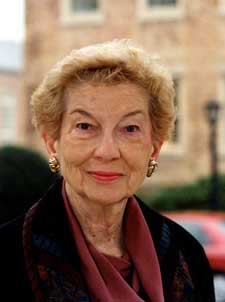 A young elementary school teacher, widowed in the 1940s and with a 2-year-old daughter, Mary Turner Lane could have stayed in New Bern and continued to teach. Instead, she chose to come to UNC, where she earned her master’s in education in 1953 and where she remained for 32 years. Over those decades, she became a vital part of the University’s transition from a nearly all-male institution to one that strives to treat women as equal partners in academia.

Lane leaves a legacy of leadership in the push for women’s rights at Carolina. Her best known role was as the founding director of UNC’s women’s studies program, started in 1976. She said in an oral history interview in 1986 that she spent the first year visiting heads of other campus departments to spread the word about the program and gain support for it.

In that interview, she related a telling story about her directorship: She asked the dean of the College of Arts and Sciences where her office would be. He replied, she said, that because the women’s studies position was half time, she should be fine continuing to work out of her office in the School of Education. Determined to be in the center of campus as a symbol of the program’s importance, she visited his office daily for about two weeks, checking on her office assignment. She finally was assigned an office in Hamilton Hall – which she shared.

Her longest commitment at UNC was to the School of Education where, from 1954 until 1976, she rose through the academic ranks. She retired from the school as associate professor emerita.

Other accomplishments included founding the Association for Woman Faculty and Professionals, serving in UNC’s Center for Population Control, acting as an adviser to the dean of women’s office and consulting with the Egyptian minister of education.

A native of New Bern, Lane graduated from Salem College, began teaching second grade, married Thomas Lane and saw him off to World War II. Shortly after his return, he died in a car accident, and Lane became a widow with a 2-year old daughter. She returned to New Bern and said in her oral history that she could have stayed there and taught school for 30 years. At the urging of her mother, also a Salem College graduate, Lane and her daughter moved to Chapel Hill so she could pursue a master’s degree.

At that time, women were not allowed to participate in all academic programs. From the day she set foot on campus, however, she made it a point to ensure that women would no longer be confined to the shadows.

As she took course work and was involved in various projects, she was asked to become an instructor in the School of Education. She was awarded a Danforth Foundation Fellowship and earned her doctorate at Duke University in 1962.

She described in her oral history that, as the ’60s approached, attitudes began changing at UNC and at colleges and universities across the country. Women wanted equal access and equal rights. As UNC made often-painful transitions, Lane served on three dozen committees involved in women’s rights.

For her efforts, she was recognized in 1997 with a distinguished women’s award named for Cornelia Phillips Spencer, with the GAA’s Faculty Service Award in 2004, with honorary membership in Valkyries and with the Women’s Advocacy Award from the Carolina Women’s Center, which also dedicated the Mary Turner Lane Reading and Resource Room at the center. The Association of Women Faculty and Professionals established the Mary Turner Lane Award in 1986, given annually to a woman judged to have made outstanding contributions to the lives of women on campus. Lane was its first recipient.

In a 1997 article in the University Gazette, Lane, reflecting on the changes in the status of women on campus, said: “I think this is a wonderful University, and I wanted it to live up to its ideals. To treat women unfairly did not live up to those ideals.”

On a lighter note, she once noted that Hinton James walked from Wilmington to enroll in the new university at Chapel Hill. His sisters stayed home. She observed that in the late 1980s, his sisters would have come with him.

A celebration of her life will be held at Carol Woods Retirement Center at 2 p.m. on July 25.