Now, An Easy Way to Share and Preserve Your Carolina Stories 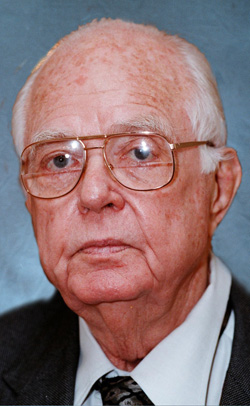 Chancellor James Moeser said that Walter Royal Davis was one of the first people he visited when he came to Chapel Hill. It’s no wonder – besides being a generous philanthropist, Davis was in an elite class of higher education power brokers in the history of North Carolina and the University.

Davis, an eastern North Carolina farm boy and self-made Texas oil tycoon, died May 19 at his home in Chapel Hill. He was 88. As a member of the UNC System Board of Governors and Carolina’s Board of Trustees, he was at times at odds with system Presidents C.D. Spangler ’54 and Molly Corbett Broad, and he resigned from the Board of Governors when he could not get the former removed, according to a journalist who is researching a biography of Davis.

But Davis will be remembered principally for his wallet that opened up whenever he saw a need, be it a sick child or one struggling in school, a powerful political candidate or a big university.

His name is on the high-rise library that opened in 1984 when UNC had outgrown its primary undergraduate library. Though Davis gave millions of dollars to Carolina, the library wasn’t built with his money but stands as an example of his work among the state’s decision makers: In the early 1970s he dissuaded them from spreading the proceeds from the sale of Carolina’s utilities among all the state’s public campuses – UNC got almost all of it, some $30 million, which built the Davis Library and paid for renovations to Wilson Library and an addition to the Health Sciences Library.

“He was a power and a great source of support and advice and counsel,” Moeser told the Board of Trustees at its regular meeting days after Davis’ death. “He was a quiet power, but I felt it keenly.”

Davis, who never went to college, served three terms as a UNC trustee – 1973-81, 1993-97 and 1997-2001 – and two years as chair of the board. His giving on the campus stretches from library renovations to research and strategic initiatives to programs for students to the Southern Oral History Program and an oral history program in his name. He gave $1 million toward construction of the Dean Smith Center and later  kicked in $400,000 more to help with the cost of operations.

He received UNC’s first Light on the Hill Award in 2004 for service to the University and also the prestigious William Richardson Davie service award from the University and the Distinguished Service Medal from the General Alumni Association. He was inducted into the Order of the Golden Fleece. Davis also was on UNC’s Board of Visitors, and he was a Duke University trustee.

Ned Cline, who is working on an authorized biography, said Davis pushed Spangler’s candidacy for president because he thought Spangler’s business experience would be good for the university system. But he came to believe Spangler, president from 1986-98, was neglecting university business in favor of his own. Later, Cline said, Davis had little confidence that Broad understood North Carolina or the political environment in the state.

Davis was very satisfied with current President Erskine Bowles ’67, however – his ties to the Bowles family run deep. Davis was a supporter of Bowles’ father, Hargrove “Skipper” Bowles ’41 in his 1972 run for the governorship. But it was Bowles’ successful opponent, James Holshouser ’60 (LLB), who connected him with UNC.

Cline said Davis showed up at state Republican headquarters one day and dropped off a bag. Though no one there even knew him, the bag contained $10,000 to help retire Holshouser’s campaign debt.

Davis first worked as a clerk and truck driver after he graduated from Hargrave Military Academy in 1938. The son of a Pasquotank farmer couldn’t afford to go to college. He settled in Texas and borrowed money to buy trucks to haul crude oil from wells to refineries. By 1968 he had a multi-million-dollar business. He later merged his company with Occidental Petroleum.

He kept a home in Midland, Texas.

Besides UNC, Davis was a benefactor to public schools and colleges in the Albemarle Sound region where he grew up. His philanthropy included scholarship funds and help to individuals with school expenses.

At N.C. State University, for example, he contributed to numerous programs in the College of Agriculture and Life Sciences and helped create one of the college’s largest scholarship endowments.

He helped flood victims after Hurricane Floyd. He gave for cancer research – he lost a stepdaughter to cancer – and for occupational therapy. Cline said Davis was instrumental in starting two Norfolk, Va.-based medical-related charities, Operation Smile and Physicians for Peace. The former sponsors volunteers who repair childhood facial deformities, and the latter sends doctors to Third World countries to train medical personnel.

He gave $1.4 million for students who would teach in poor areas of northeastern North Carolina.

In 2002 he created a scholarship fund in UNC’s School of Nursing, a $100,000 gift to  provide annual scholarship support to undergraduate nursing students who have a sound academic record and demonstrate financial need. Davis asked that consideration be given to first-generation college students or those admitted to the school after completing pre-nursing courses in community colleges.

“Walter was, I believe, the most generous man I’ve ever met,” actor Andy Griffith ’49, a longtime friend and neighbor in Dare County, told The News & Observer. “He gave to people that nobody even knows about.”

Davis also gave spontaneously. He was known to leave extra-large tips for waitresses. He walked into a church in Elizabeth City and retired half its debt. He once bought a fishing pier at Kitty Hawk after he was unable to get his favorite soft drink there. In a legendary moment as a UNC trustee in 1999, he gave more than his share when a hat was passed around for Hurricane Floyd victims – he wrote a $100,000 check on the spot.

Davis said he hoped to give away the last of his money on his dying day, a philosophy, Cline said, that he adopted from one of his associates during his days in Texas.