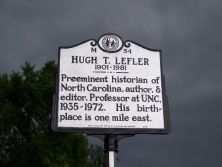 As a history professor at UNC for nearly four decades, Hugh Talmage Lefler was renowned in the classroom for being both stimulating and entertaining. In speaking before a class of up to 100 students, Lefler was known for delivering his popular lectures as if he were speaking directly to each person there.

Lefler, who joined UNC’s faculty in 1935 and was a Kenan Professor of history when he retired in 1972, estimated that he had taught about 18,000 students in residence and many hundreds in extension courses over the years. Those former students and all Carolina alumni are being welcomed to attend the unveiling of an N.C. highway historical marker near his boyhood home near Cooleemee in Davie County, where Lefler was born in 1901.

In addition to his teaching, Lefler was the author of a number of scholarly works in various historical fields, and his textbooks influenced generations of children learning about their native state. Many of his students, both undergraduate and graduate, went on to teach and write history throughout the state and the nation. Lefler died in 1981.

The unveiling ceremony is scheduled to begin at 10 a.m. on Saturday, May 17, at the intersection of N.C. 801 and Watts Street in Cooleemee. A program of music and tribute will follow at nearby Liberty United Methodist Church. Parking will be available at the old cotton mill.

Jerry C. Cashion ’64, retired chairman of the N.C. Historical Commission, was a student of Lefler and served as his last graduate assistant while working on his doctorate, which he received in 1979. It was from Lefler that Cashion learned his lecture technique and his insistence on accuracy in historical research. “Hugh Lefler loved the University and this state,” Cashion said.

For program details or directions, contact Lynn Rumley, Cooleemee Historical Association by e-mail or by calling (336) 284-6040.