The Burroughs Wellcome Fund has given $1 million to UNC’s  Morehead Planetarium and Science Center to create an endowment fund to support the North Carolina Science Festival.

The announcement came Wednesday during a reception for event hosts who partner with the science festival and UNC System President Tom Ross ’75 (JD) accepted the gift on behalf of the Morehead. 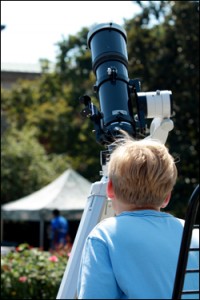 A young scientist learns how to use a telescope at the 2010 UNC Science Expo. (UNC photo)

The endowment gift will allow the planetarium and science center to make long-term, strategic investments in the festival. Since the festival was started in 2010, it has grown dramatically, holding events in 95 counties and reaching more than 330,000 participants in 2014. Events for 2015 will run April 10-26.

While the planetarium and science center organizes the festival, hundreds of partner organizations including universities, schools, libraries, parks, businesses and museums host a series of festival events across the state, spanning two weeks each April. These events are designed to celebrate the cultural, educational and financial impact that science, technology, engineering and mathematics have on North Carolina. Events include hands-on activities, science talks, lab tours, nature experiences, exhibits and performances to engage a wide range of public audiences.

“We couldn’t do the North Carolina Science Festival without support from organizations like the Burroughs Wellcome Fund,” said Todd Boyette, the festival’s co-founder and director of the Morehead Planetarium and Science Center. “We also couldn’t do it without all of our event hosts, who constantly amaze us with the quality of their events.”

The Burroughs Wellcome Fund has also announced a $1 million gift to the N.C. School of Science and Mathematics, making both gifts in celebration of its 60th anniversary.

The Morehead Planetarium and Science Center is a constituent unit of the University of North Carolina at Chapel Hill and is one of the largest planetariums in the United States.