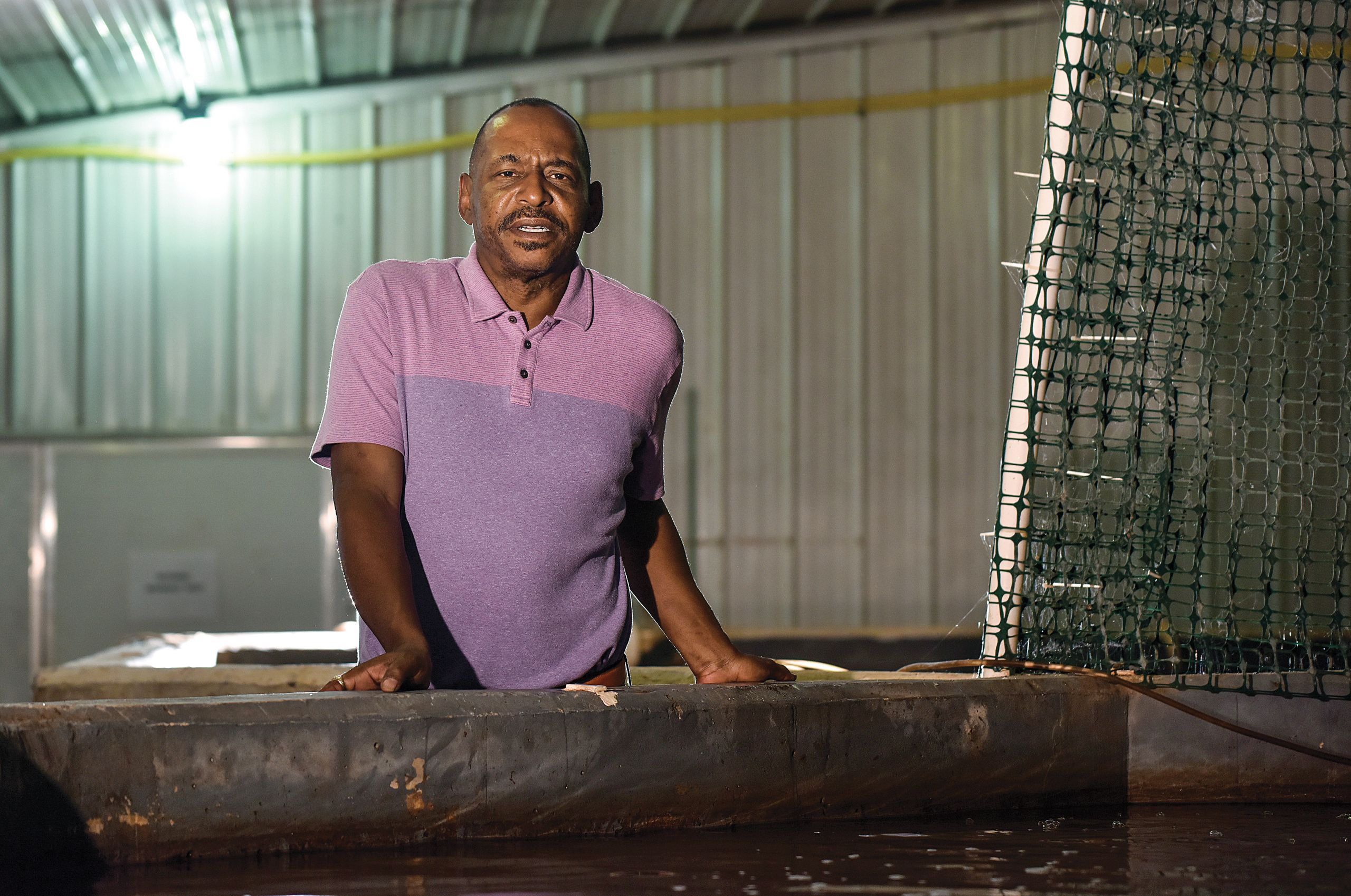 A devastating accident left Valee Taylor ’79 broken. His healing had much to do with the new way he saw and fed the need all around him.

He will show you his scars. Right there in his office, he unbuttons his shirt, pulls it down at the shoulder and points out the marks of his pain and his survival. He wouldn’t be who he is or where he is without them.

He can’t really fish anymore, not since the accident.

But he loves to talk about the process and the power of overcoming, and on a sunny Sunday, Valee Taylor ’79 ushers a group of college students out the door of the long white sheet metal building at the end of Lonesome Road.

They’d come to Cedar Grove, a hardscrabble unincorporated community in northern Orange County, to tour Taylor Fish Farm. Opened in 2009, it raises tilapia in four massive concrete indoor pools, producing about 4,000 pounds of mercury-free fish per week. At no extra charge, the students got a freewheeling yet engrossing treatise on the state of modern farming, ecological sustainability and rural poverty.

This is Taylor’s family’s land. For a long time, it was an ordinary North Carolina tobacco farm. Now, this land heals.

The students applaud, and a few hang on Taylor’s words of wisdom before boarding the bus. His message: Good food produces more than healthy bodies. It has the power to mend broken spirits and unite divided communities. The Taylor family has seen it.

You’d better get a hobby

As they worked the Jaws of Life to free him, all Taylor could think was that he wasn’t saved. While he was driving a state vehicle for his work as a chief probation officer in 1999, a tire blowout caused him to veer off the road and flip over. He had two collapsed lungs from the airbag impact, pulverized shoulders and brain damage.

They told him he was going to die.

“It gets real real quick when they send the chaplain to your room. Then you start talking to God.”

Taylor endured three surgeries to repair his lungs and shoulders. He still experiences shoulder pain and some short-term memory loss. Twenty years into his work, he had to take a disability retirement.

He lay on the couch at home, hurting and depressed. His doctor diagnosed him with PTSD and said he’d better get a hobby. Fishing was out, with his crushed shoulders. Gardening, he assumed, was, too. But the doctor said plant a little garden in the front yard — work on it for as long as you can every day, even if that’s just for a few minutes.

Five minutes became 10, and 10 minutes became an hour. Before long, he was regaining his strength and his spirit and had a nice crop of tomatoes, cucumbers and other produce to show for it.

He put a sign out telling anyone who came by to take whatever they wanted for free. Somewhat to his surprise, many took him up on it.

“I started seeing the need in my community,” Taylor said.

The Rev. Grace Hackney was the new pastor of the predominantly white Cedar Grove United Methodist Church in 2003 when she met Taylor in downtown Hillsborough, helping a couple of his neighbors sign up for public assistance.

It was the start of a relationship that fed a need Hackney and Taylor shared — to help people in a community that’s more complicated than it seems on the pleasant drive up N.C. 86. South of the county seat, there is not a great awareness that extreme poverty and racial divide are, as in many places, at home in Orange County.

Before long, Hackney and Taylor were putting food in the back of her old Volvo or his truck and taking it to people he knew in the community.

It took a tragedy in Cedar Grove to draw Taylor’s mother, Scenobia, into the picture. A family friend and owner of a bait-and-tackle store was murdered in 2004. Scenobia Taylor, now 89, was moved to do something for the common good: She decided to turn five acres of her land into a community garden, and she worked with Hackney, ultimately deciding to give the land to the church.

However rooted in kindness, the idea met resistance.

According to Hackney and the Taylors, some members of the church weren’t comfortable with a giveaway garden. Hackney led a series of community discussions aimed at scrutinizing the church’s role in the community.

“We were asking, ‘Is it faithful for us to live in a part of the county that is gifted with lots of land that’s not being used, when we have neighbors who are hungry?’ ” Hackney said. “We named that as sinful.”

Scenobia Taylor faced opposition as well. Members of her family objected to her giving the land to a white church, and she understood. Her father, at one time a large landowner in the county, made his living amid racial prejudice in the Jim Crow days.

He had donated land for a community school. She would press forward with her donation. After all, the garden would serve everyone. 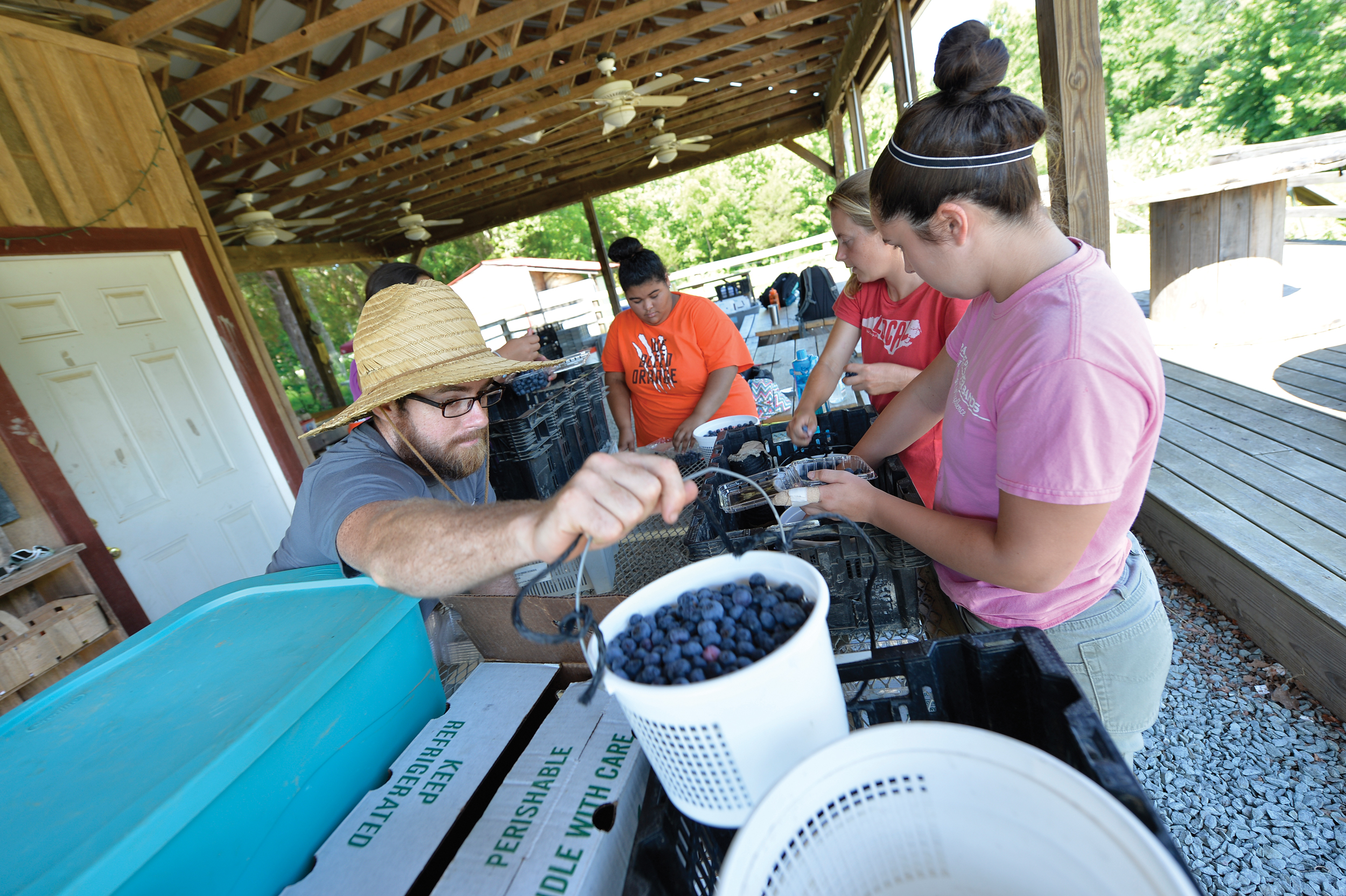 They decided to call the garden Anathoth from a passage in Jeremiah in which the prophet buys a field and instructs the exiled Israelites to build houses for themselves and make peace by planting gardens.

Julia Sendor is co-manager and operator of Anathoth’s Community Supported Agriculture program. She grew up in Chapel Hill, “but I didn’t even know there was a Cedar Grove,” she said. “Which is really sad, but also really telling, how removed lives in rural areas and those in urban and suburban areas can be.”

About 180 families receive a box of produce 32 weeks a year — staples like greens, tomatoes, cucumbers and some slightly more exotic fare. Roughly half pay for it; others pay a reduced rate, and the rest pay nothing.

Sendor and co-manager Chas Edens work with volunteers from the area and from outside it, some high school and college students, some paying and some nonpaying members of the CSA. They come by the garden on Lonesome Road — close to the Taylor Fish Farm — on Saturdays to help out and enjoy a potluck lunch afterward.

“Most of our culture is pushing people away from this,” Sendor said. “They have to drive out of their way, getting sweaty and dirty, meeting people they don’t know, meeting people who are different from them. We want this kind of communal sharing to be part of the rhythm of their lives.”

Many, like Amy Curran, found the farm as students at Duke Divinity School.

“I found myself wondering what I was doing here [divinity school] when what I really want to do is be a farmer,” Curran said while clearing brush at Anathoth on a mild Saturday morning. “That’s when I started learning about eco-theology and why it’s important for people of faith to care well for the Earth and cultivate a sense of place. Anathoth is where I come to do that.”

Rhonda Lindsay receives a free CSA box each week. She’s a mother of two and is completing an online college degree from Liberty University.

“I’d never had bok choy before,” she said. “I was like, ‘I love this stuff!’ Because I’m in college, my husband is the only one bringing in income. For a family of four, it provides us with a lot more healthy options and supplements our food budget. So it helps on a few levels.”

Valee Taylor stops by the garden a lot. As he has since the days of his little front yard garden, he continues to be instrumental in making sure healthy food gets to people who need it the most.

“Valee was like a lot of us in Cedar Grove,” Hackney said. “He was kind of this broken man who wanted to give back to his community. I think we were in the right place at the right time under the right circumstances, and something very beautiful has grown out of that.”

He could fish after all

When Taylor’s doctor had asked him about a hobby, fishing was the first thing he thought of. So it’s fitting that the journey that began with that first step out his front door led to the founding of the Taylor Fish Farm in 2009. Think of it as the for-profit arm of the Taylors’ ongoing effort to make people healthier.

The farm is a family affair. Taylor, with his sister Renee Stewart ’77 and brother Dr. Jerry Taylor, obtained a $1.2 million loan to build the facility. Valee’s son Jeremy Taylor runs the day-to-day operations.

Stewart, a pharmacist, initiated the idea. She and Valee partnered with the N.C. Cooperative Extension Service and the department of biological and agricultural engineering at N.C. State University, which designed and engineered the facility and trained Valee and Jeremy to run it; the Taylors and N.C. State share a copyright for the design. They’ve also received small-business support from Orange County — $9,447 for utilities extension in 2009 and a general grant of $11,000 last year.

The indoor farm produces tilapia that are virtually free of mercury and other toxins thanks to their soybean meal diet and a state-of-the-art recirculating aquaculture system. The water used in the large, open concrete tanks is continuously recycled through a filtration system. Solids are removed, microbead filters further purify the water, and then the water is reoxygenated and returned to the tanks.

“I enjoy watching the fish grow,” he said. “It gives me a sense of accomplishment.” 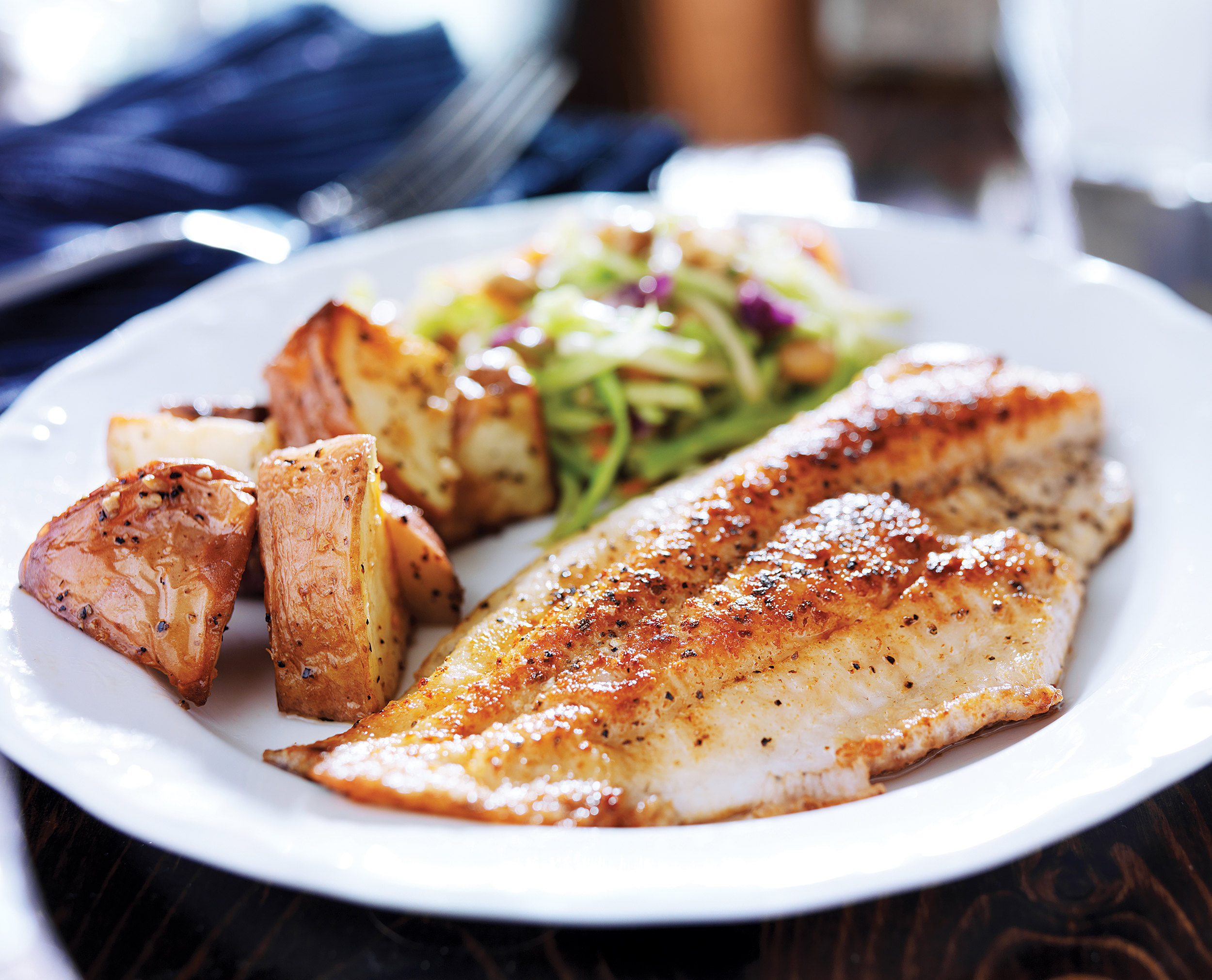 The farm packages some live fish for wholesaling, and the rest is sent to Southern Foods in Greensboro for processing. From there, the fish goes to the farm’s customers, including Whole Foods, Publix and Duke’s Fuqua School of Business cafeteria.

“We don’t use steroids or hormones in the fish, so we have to be very careful where we source the baby fish from,” Valee Taylor said. “We test for all 209 carcinogens [PCBs]; we’re Whole Foods-certified. We’re one of the few fish farms that have that GAP certification,” referring to Good Agricultural Practices, voluntary audits by the U.S. Food and Drug Administration that verify that food is produced to minimize risks of microbial food safety hazards.

His pitch sounds as if it might be a family affair as well.

“We’re talking about foodicology versus pharmacology. What can we do through food to combat emergency room visits, to reduce or even cure diabetes, to lower high blood pressure, to reduce the risk of heart attack?”

The business has been a challenge. The process is not cheap.

“Our price points are higher than our foreign competitors. We can’t compete on price point. Our standards are a lot higher.”

His customers have to be willing to pay a little more. But the Taylors always have worked outside the norms of the market, and they have produced. A devastating car accident. A community divided by race and class. A business that relies on large institutions heeding their better angels.

“I have to say, I am so proud of Valee,” Hackney said. “He has lived into the big ideas that he’s had. Not everybody’s able to do that.”

Matt Dees ’01 is a writer and editor based in Durham

Salt and pepper to taste