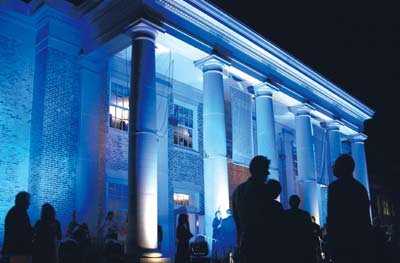 After a three-year renovation that cost about $18 million, 74-year-old Memorial Hall reopened in September with a gala weekend whose organizers hope will plant the seeds of a performing arts revival at Carolina.

UNC’s primary auditorium, over the years Memorial has been a workhorse for musicians, actors, comedians and lecturers. But it was generally considered outdated – not the kind of place modern acts looked forward to playing. Now it is considered the linchpin in an ambitious building and refurbishing campaign to serve the arts academically and publicly on the northwest corner of the campus. 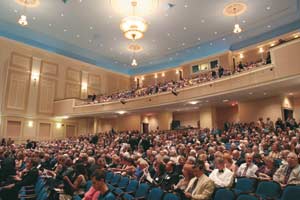 The building has more than doubled in size, although the auditorium remains largely unchanged and actually seats a few fewer – 1,433 – than it did when its rows were closer together. The expansion gave it lobby space, rooms for pre-show and intermission gatherings, backstage amenities, and the restroom space it had sorely lacked. From the outside, the much taller stage house is noticeable from Polk Place, and the facade on Cameron Avenue is bulkier.

Musicians Bonnie Raitt, Nanci Griffith and Wynton Marsalis; the Academy of Ancient Music, the Russian National Orchestra and other international groups; and several state-based performers are booked for the first season. There are a few acts aimed specifically at students, and 400 student tickets priced at $10 are available for every show. The N.C. Symphony, which has not always done well at the Memorial box office, has sold out a six-concert series to season subscribers.

Most of the cost of the renovation came from bond revenues approved by the state’s voters in 2000. To the $5.1 million raised privately, the William R. Kenan Jr. Charitable Trust recently endowed the Carolina Performing Arts Series with $5 million, contingent on a match from private money raised by the University.

Memorial originally was dedicated to David Lowry Swain, an 1825 graduate and N.C. governor from 1831 to 1835 who served as UNC’s president through the Civil War years. It was expanded to include Carolina alumni who lost their lives in the war and those who had served the University notably. In September, it was rededicated to take in “all members of the University community who lost their lives while on active duty serving their country.”

The auditorium is now named the Beasley-Curtis Auditorium for two donors, Don Curtis ’63 and George Beasley, both of whom are prominent in broadcasting in North Carolina.

Griffith Comes Home
In what may not be the surprise of the decade, Carolina has been chosen as the repository for the personal archives of Andy Griffith ’49. 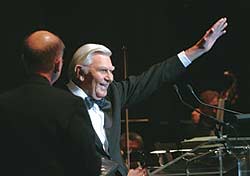 Griffith, the Mount Airy native who made a splash at a Kenan Stadium halftime in 1954 with his spoof of a backwoods bumpkin’s first football game, and who starred in a TV show that started out weekly and now is shown several times most days, was in Chapel Hill in early September to donate his personal files to the Southern Historical Collection.

Griffith and his wife, Cindi, announced the donation, and Griffith entertained audiences at the Memorial Hall re-opening gala, where he was one of three inaugural recipients of the Carolina Performing Arts Lifetime Achievement Awards.

Tim West ’72 (MAT, ’76 MSW), director of the collection and curator of manuscripts, said former UNC System President Bill Friday ’48 (LLB) deserved most of the thanks for securing the gift. “He’s really great at explaining to him the importance of displaying his legacy here,” West said.

West said that, as is typical of collection commitments, he won’t know the extent of what the University has until he can go through it. He expects it will include film scripts, musical scores, correspondence (he’s told that Griffith hasn’t kept too much of his fan mail), photographs and papers relating to the actor’s business dealings.

He said the library already has 16-millimeter prints of The Andy Griffith Show episodes. “They’re neat because they have the original commercials,” he said.

The Griffith collection will be available to scholars studying period pop culture and the entertainment business, and those who momentarily pretend to be.