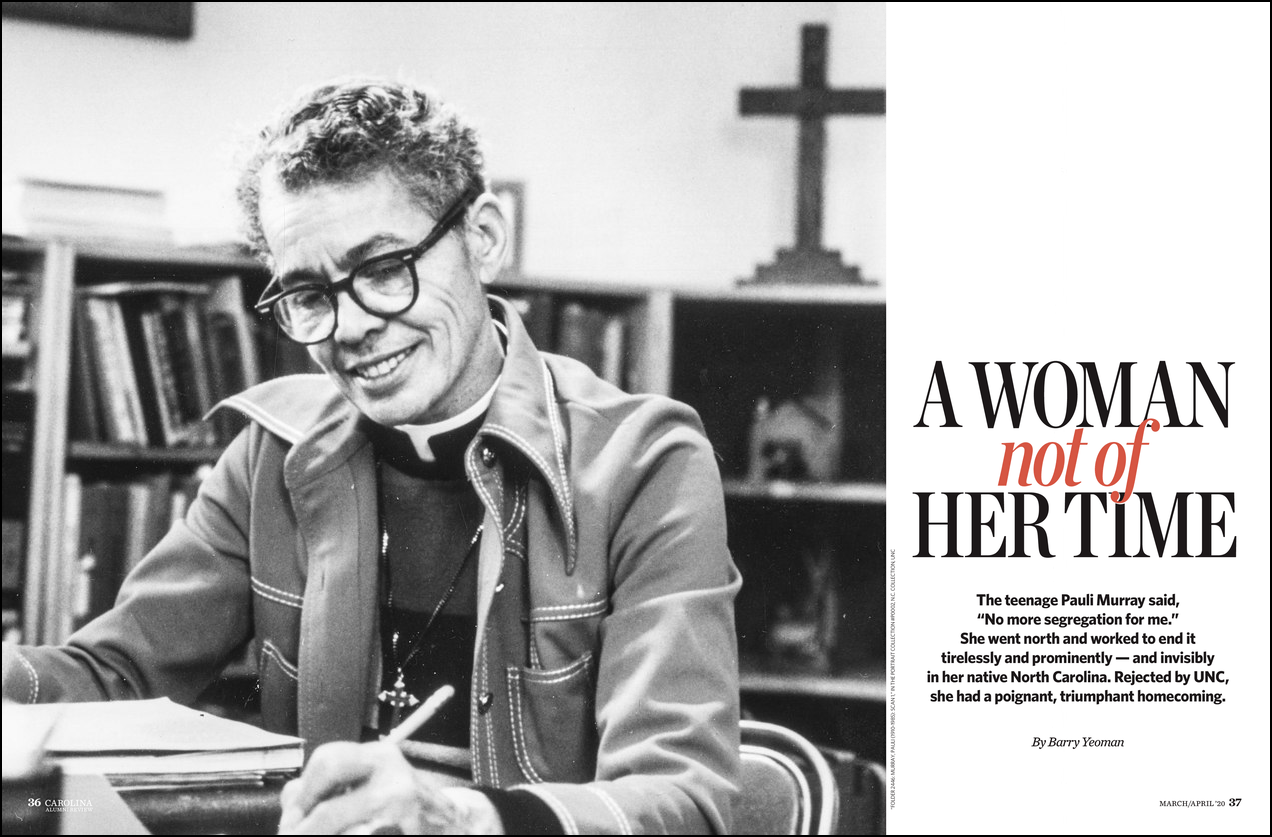 The Carolina Alumni Review received a Silver Award in Profile Writing for Barry Yeoman’s story about Pauli Murray, “A Woman Not of Her Time,” in the March/April 2020 issue.

The GAA has received four awards for its work from the Council for Advancement and Support of Education for the Southeastern district of the U.S.

The Carolina Alumni Review received three of the awards, including a Silver Award in Profile Writing for “A Woman Not of Her Time” in the March/April 2020 issue. Writer Barry Yeoman delved into the life and legacy of the late lawyer and civil rights activist Pauli Murray, who was denied admission to a UNC graduate program in 1938 because she was Black.

The Review’s other awards were for articles in the Feature, Profile or News — Less Than 1,000 Words category:

• Silver Award: “A Fresh Start With Old Prisons,” a profile of Noran Sanford ’91 and his efforts to turn an abandoned North Carolina prison into a community farm and cultural center, by Melba Newsome, July/August 2019.

•Bronze Award: “Reading Between — and Along — the Lines,” a profile of visual artist Michael Klauke ’86, who employs a technique called textual pointillism, creating images using thousands of tiny words, by Eric Frederick ’81, May/June 2020.

The GAA’s Programs Department received a Platinum Award Honorable Mention: Best Practices in Alumni Relations for its Think Fast forums, which draw on experts from the UNC campus and community to address timely issues, such as the COVID-19 pandemic and systemic racism.

Overall, the GAA has been recognized with 134 national or district CASE awards since 1996 — 71 for Alumni Communications; 61 for Alumni Programs, which include 27 awards from CASE’s Affiliated Student Advancement Programs; and two for Membership.

The awards usually are announced at the CASE District 3 annual conference in February; this year, they were announced online Jan. 28 due to the pandemic.

The University also received several CASE awards, including Platinum Award District Finalist: Best Photography for “Graduation Photos in the Time of COVID-19.” As a Platinum Award finalist, the entry will go on to compete in that category with entries from other regions of the country. The project also received a Silver Award for Photography: Series of Related Photographs.

The University’s other awards included:

• Silver Award — Video: Video on a Shoestring: “Serving North Carolina,” which highlighted public service work the University does across the state.

Headquartered in Washington, D.C., CASE is an international professional association serving educational institutions and the advancement professionals who work on their behalf in alumni relations, communications, development, marketing and allied areas.