Rob Hogan, for years a fixture on the Kenan Stadium sidelines as the owner and handler of Carolina’s mascot, died Oct. 8 from illness related to a fall on his farm. 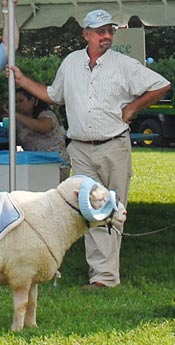 Hogan, 54, had been hospitalized since Sept. 15, when he fell from his tractor and suffered a hip injury that became life-threatening. The ninth-generation farmer was in his field harvesting hay until 11 p.m. As he ended his workday, he missed a step on his tractor, landing with his weight on one hip.

The next morning, he could not move or feel his left leg, wrote his wife, Ann Leonard, in a blog on CaringBridge.org. Doctors at UNC Hospitals diagnosed Hogan with rhabdomyolysis, a condition in which a muscle injury causes tissue to die and release myoglobin, which is toxic to the kidneys. He underwent several surgeries over three weeks. The family kept friends apprised of his condition daily.

Thousands of mourners attended a memorial service, provided by the University at the George Watts Hill Alumni Center on Oct. 13.

In Hogan’s absence, Rameses XVIII — a regular attraction for fans visiting the GAA’s tent at Tar Heel Town at the Bell Tower on home football game Saturdays — missed the early games. Hogan died a day before other family members had planned to bring the mascot to the Clemson game on Oct. 9. Rameses made his first appearance at the Homecoming game Oct. 30.

The Hogan family has cared for the Tar Heel mascot since 1924.