Built in the 1940s to train cadets for the U.S. Navy, the Armory has since housed the University’s ROTC programs. It’s slated to be demolished as part of the Campus Master Plan. Photo: UNC Image Collection #P0004, NC Collection Photo Archives, UNC
Posted on July 15, 2022

When Rob Rivers ’73 goes into battle, he likes to know the lay of the land. Wearing aviator-style dark glasses, he points across South Columbia Street at Whitehead Hall, a three-story building adjacent to the Carolina Inn.

“The plan is that Whitehead is slated for demolition, but it’s in the second tier. In the first tier of buildings to be demolished is the Naval Armory,” said this former F-8 Crusader fighter pilot. As a student, he participated in the Naval Reserve Officers Training Corps program. 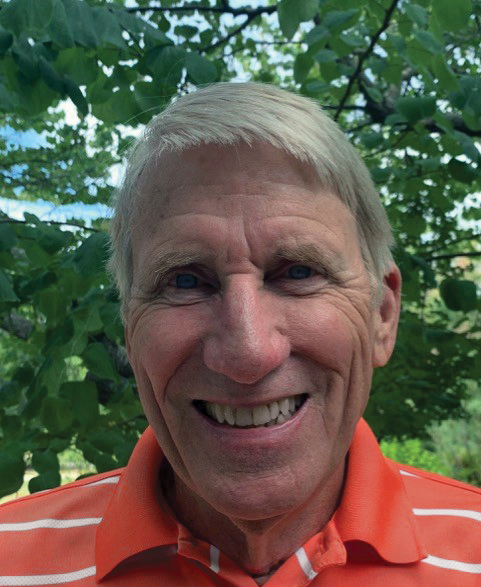 “We’re here for the fight. We all were Navy and Marine Corps officers. Our tenacity is legendary, and we don’t start fights we aren’t sure we can win.”
— Rob Rivers ’73 Photo courtesy of Rob Rivers ’73

The proposal Rivers referred to is the 2019 Campus Master Plan, which governs the University’s long-term strategic goals for its landholdings. Part of the plan calls for the Naval Armory to be torn down and replaced with a building that will house the Institute for Convergent Science. The center would “bring together medicine, engineering, and physical and life sciences to foster collaboration and improve the University’s competitive advantage for multidisciplinary research funding,” University Architect Evan Yassky said in an email.

Today the Armory is home to 130 ROTC (Reserve Officers Training Corps) students planning careers in the Navy, Marine Corps, Army and Air Force. (Each service has its own ROTC program.) In return for substantial scholarships, ROTC students serve in the military after graduation.

Like thousands of other ROTC students, Rivers used the centrally located Armory building as home base for daily military-related classes, drills and extracurricular activities. Rivers co-founded the Naval Armory Preservation Committee to save the building for future students.

The Armory, which opened its doors in 1943, is a distinctive presence on campus thanks to the battleship-gray naval deck gun on its front lawn.

During World War II, the Armory was the center of activity as Carolina helped train hundreds of ROTC midshipmen and more than 18,000 cadets in the Navy’s Pre-Flight School, one of only four programs nationwide at the time. When the Armory was built, the Navy and UNC signed a memorandum of agreement that in part stated the University has to provide a certain amount of square footage for ROTC programs, but it does not require the space be in the same building.

Rivers and members of the preservation committee held meetings in 2020 and 2021 with Chancellor Kevin Guskiewicz, Master Plan Committee Chair Anna Wu, and Yassky to preserve the 80-year-old, two-story brick building, which was designed by Archie Royal Davis ’33, the architect behind the Carolina Inn and Morehead Planetarium. But the committee was unsuccessful. Guskiewicz said the University is “committeed to get bigger and better space for our ROTC program that’s much needed because the current building is insufficient.”

Rivers, a former NASA test pilot, hasn’t surrendered. “We’re not a group of students who are going to graduate in May and go on our way,” Rivers said. “We’re here for the fight. We all were Navy and Marine Corps officers. Our tenacity is legendary, and we don’t start fights we aren’t sure we can win.”

The committee, which was formed by the UNC NROTC Alumni Association — with 1,350 members, according to Rivers — plans to launch a lobbying campaign that includes outreach to members of Congress, the governor, the N.C. General Assembly, prominent N.C. citizens and veterans groups. It also has submitted a report to the UNC Board of Trustees.

The committee has begun contacting ROTC alumni, some of whom are well-known politicians such as Jim Crawford Jr. ’60. Crawford, a former lieutenant junior grade in the Navy who served 14 terms in the N.C. General Assembly and chaired its Appropriations Committee, said the Armory is “a very vital part of the University, North Carolina and the United States, not just as a school for officers, but as a protection for the whole country. I think we ought to leave it as it is.”

Others pushing to save the building are prominent business executives. Hugh McColl Jr. ’57, past chair and CEO of Bank of America Corp., the nation’s second-largest bank, said Carolina should keep the building because of its history. “It doesn’t seem like it has a big enough footprint to make a damn bit of difference,” said McColl, who after participating in NROTC served as a Marine Corps lieutenant. “It’s such an infinitely small amount of space, they ought to leave it alone.”

Rudi Colloredo-Mansfeld ’87, senior associate dean for social sciences and global programs, who provides academic oversight of UNC’s ROTC program, said he understands alumni sentiments. “The reality of a 200-year-old campus is you have loyal alumni who built their place here. I really respect that desire they have,” said Colloredo-Mansfeld, the faculty representative on the GAA Board of Directors. “At the same time, we have a compact campus with an evolving mission, and we need to also serve that. So these tensions come in.” 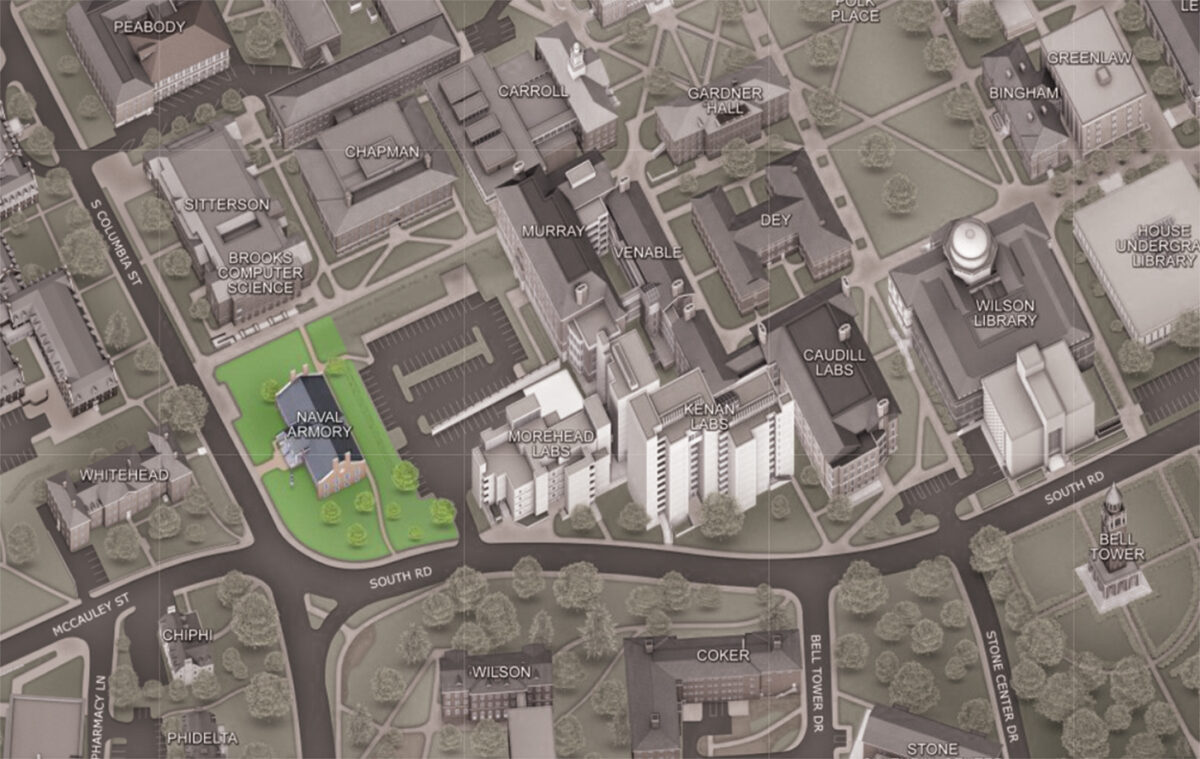 Map showing the campus location of the Naval Armory

The Armory has cultural significance worth preserving, according to Rivers. Presidents Gerald Ford and George H.W. Bush trained on campus. Baseball great Ted Williams, legendary UCLA basketball coach John Wooden, iconic Alabama football coach Bear Bryant and world heavy-weight-boxing champion Jack Dempsey taught cadets there. The Armory also was the first place where African Americans were inducted into the Navy as full-fledged enlisted men, instead of serving in menial roles as they had for decades.

Carolina’s military alumni are working on a long-range plan to ask the National Registry of Historic Places to add the Armory to its list and are pressing the George H.W. Bush Presidential Library to weigh in on their behalf.

If the Armory is demolished and its functions spread out among different campus locations, ROTC esprit de corps will suffer, Rivers said. “There is synergy here in the cross talk and cross-training,” he said. “The naval sciences office could be in South, and we could have a classroom in Dey Hall and another down in the Dean Dome, and you can’t get together.”

Rivers said University leaders told him last year that he had a three-year window to save the building, and he speculated the time frame may have been extended due to COVID-related cuts to University funding.

If the University razes the Armory, ROTC members will follow orders like they are trained to do. “If the University ends up moving us to a different location and meets the requirements of the memorandum of agreement, I’ll do my mission wherever they put me,” said UNC ROTC commanding officer Capt. Andrew Hertel.

Hertel, a former submarine officer, heads the ROTC programs at Duke and N.C. State universities, neither of which has a building exclusively dedicated to military education.

“Everybody agrees the building is historically significant,” Rivers said. “The problem is, so far we have not found the white knight who has the authority and will to stand up and say, ‘No, stop this.’ ”