Ayana Monroe began coding when she was 8. She learned about it at her elementary... 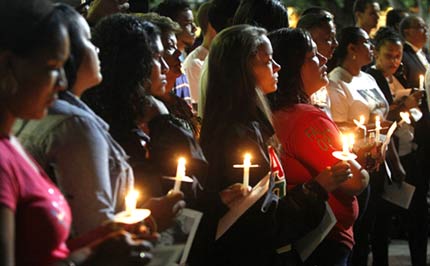 Students gathered in the Pit to mourn the death of Faith Danielle Hedgepeth. (Photo by Travis Long – N&O)

Hundreds of students gathered Monday evening in the Pit to mourn the death of Faith Danielle Hedgepeth, a 19-year-old junior whose body was found in her apartment Friday morning. Police are investigating her death as a homicide, and the Board of Trustees is offering a reward for information.

Hedgepeth, who was majoring in biology, grew up in Halifax County and had long been active in the American Indian community, including at Carolina. Family members, friends and classmates shared memories of the young woman who all invariably remembered as outgoing, smart and remarkably kind, according to a report in The Daily Tar Heel.

“None of us are ever prepared for such a sudden and unexpected loss,” Chancellor Holden Thorp ’86 told the crowd, according to The News & Observer of Raleigh. “We are stunned and grief-stricken as individuals and as a community.”

“Faith would want us to remember her for her happiness,” a cousin, Consuela Richardson, told The DTH. “I looked up to her because she was so good … I said, ‘You are the kind of woman I want to be someday.’”

News reports said the police are continuing to question people about the death. Police have not released details about the cause of Hedgepeth’s death, saying only that they believe it was not a random act of violence.

On Wednesday, the University announced that the Board of Trustees is offering a $25,000 reward through the Chapel Hill-Carrboro-UNC Crime Stoppers program for information leading to the arrest of the person or persons responsible for the Hedgepeth’s death.

During the vigil, a projector displayed photographs of Hedgepeth, noted for touching the lives of many at UNC.

“That was the first thing that struck me — her smile, that infectious smile,” Marcus Collins, Hedgepeth’s academic adviser and an assistant dean in the College of Arts and Sciences, told The DTH.

Hedgepeth was part of the Haliwa-Saponi American Indian Tribe in Warren County. At Carolina, she was involved with Unheard Voices, an a cappella group; Carolina Indian Circle; and Alpha Pi Omega sorority.

She received a Gates Millennium Scholarship and an Alston-Pleasants Scholarship to attend UNC.