Next Research Launch: Carolina’s Own Satellite

Spring break 2021 could be out of this world for a handful of Tar Heels. That’s when Assistant Professor Andrew Mann hopes to launch his own satellite, called a CubeSat, into low-Earth orbit. Small enough...

Center to Explore Issues at Heart of Digital Era

For the first time, social media last year surpassed newspapers as a news source in the U.S. Nine in 10 Americans say they get at least some of their news digitally, and by the end...

Study to Focus on Early Evidence of Autism Risk 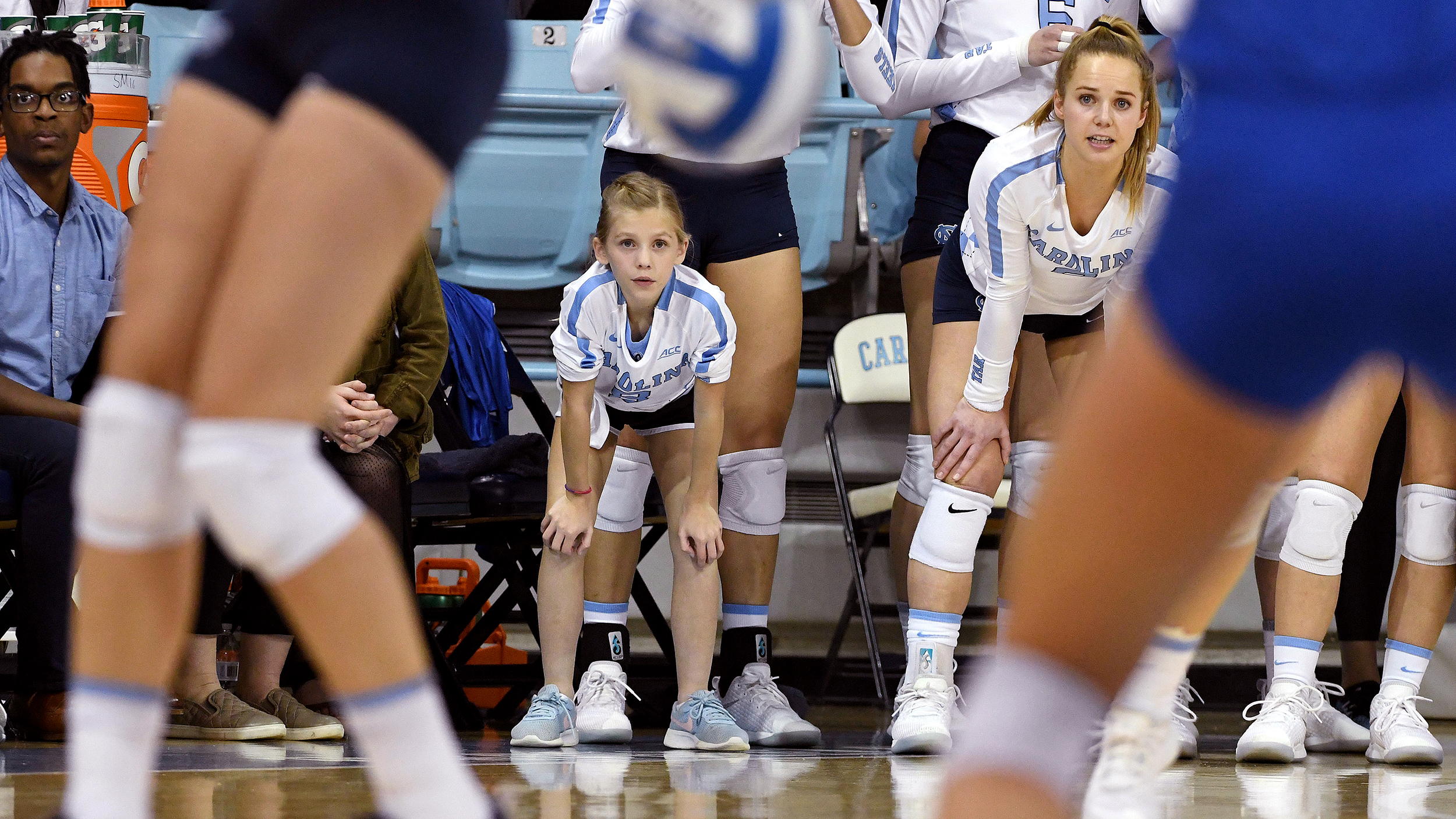 “I really like sitting on the bench and high-fiving the players during the games,” said Kelsie Houston, 8, who served as a team captain for the UNC volleyball team this season. (Jeffrey A. Camarati/UNC Athletic Communications)

As 4-year-old Mackenzie Houston sat wrapped in a vest that vibrated her chest, keeping her lungs clear of mucus and infections that cause serious trouble for kids with cystic fibrosis, she had had enough. She’d already been through other daily therapeutic rituals and more than 30 pills.

Kelsie never forgot that day, and neither did Kimberly, who besides being a mom, earned a master’s degree in nursing from UNC in 2009 and is a nurse practitioner. She wanted nothing more than to take away CF, the shorthand name used by the patients and their families who struggle with the disease.

As Mackenzie cried, Kelsie returned with a colorful drawing with the words, “CF will go away” in big, bold letters.

“My godmother has cystic fibrosis,” said Annabelle Archer, a sophomore setter on the team. “Seeing how important it is to live a normal life has helped me connect with Kelsie. She is just such a relief, you know, when you get off the court and see this smiling face of this little girl you want to go talk to. It’s just cool to have her on the team.”

Mackenzie stared at the note and stopped crying. The two sisters hugged, and their mom snapped a photo. That night, Mackenzie fell asleep with that picture tucked under her arm.

“A week later, Mackenzie still asks for her special note from her big sister,” her mother said. “The burden of this disease can be overwhelming, but we feel blessed our daughters have each other because CF is known to be such a lonely disease.”

Kelsie, Mackenzie, their mother and dad, Nathan Houston ’10 (MBA), believe that CF will go away. Their faith was bolstered recently: After three decades of research at Carolina and around the world, a new triple-combination therapy approved in fall 2019 could help kids with CF live longer, healthier lives.

One gene, many mutations 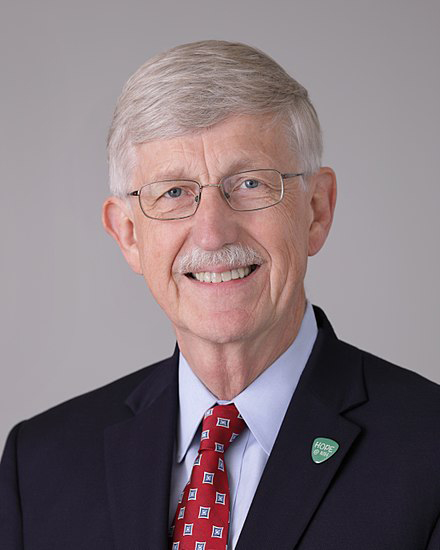 Cystic fibrosis is a recessive genetic disorder that occurs only if a child inherits one faulty copy of one particular gene from eachparent. In 1989, when researchers — including Dr. Francis Collins ’77 (MD), now director of the National Institutes of Health — discovered and cloned the CFTR gene that’s mutated in CF patients, it was a major breakthrough. It gave rise to the Human Genome Project — which Collins oversaw as director of the NIH’s National Human Genome Research Institute — and led to the discovery of many genes responsible for thousands of rare diseases.

Since then, scientists at the UNC Marsico Lung Institute led research that helped understand how CFTR mutations lead to disease and why some forms of the disease are milder than others. They parsed the intricate web of cell proteins involved in the buildup of stickier-than-normal mucus that traps infections.

The Cystic Fibrosis Foundation had funded automated large-scale screening for small molecules that might restore CFTR function. One such molecule called Kalydeco, developed by Vertex Pharmaceuticals, was approved by the FDA in 2012 to treat less than 6 percent of CF patients who have a particular genetic mutation. All other CF patients were told that something better was in the pipeline.

“The burden of this disease can be overwhelming, but we feel blessed our daughters have each other because CF is known to be such a lonely disease.”

Meanwhile, UNC researchers figured out the mechanics of the CFTR protein and developed better therapeutic protocols. In 2006, UNC professors Bill Bennett, Scott Donaldson and Ric Boucher, who leads the lung institute, collaborated with Australian colleagues to develop a treatment called hypertonic saline — super-salty purified water inhaled as a mist to keep airways lubricated. That sounds simple until you realize the genius behind it.

In healthy people, the CFTR protein traffics salt and water across cell membranes. Our biology demands salt and water for proper respiratory and digestive function. But when the CFTR protein doesn’t work, the salt traffic jams the water, leading to thick, sticky mucus and lung obstructions. Breathing becomes difficult; eventually it becomes impossible.

Faulty CFTR also leads to a lack of water in pancreatic ducts, causing a blockage of the enzymes our bodies need to break down food and absorb nutrients. This is why babies with CF struggle to gain weight and why pancreatic enzymes are a hallmark of CF therapy.

The salt in hypertonic saline draws water out of cells to thin the mucus, making it easier to cough up mucus and avoid infections. This therapy has become a staple of CF care around the world due to its effectiveness, ease of use and low cost.

The Houston kids have been inhaling hypertonic saline twice a day for years. The family was surprised when they realized a boy Kelsie had played with in preschool years ago was the son of Donaldson, one of the therapy’s developers.

“It was amazing to think that this man sitting next to me on the playground has dedicated his life’s work to helping my children live longer, healthier lives,” Kimberly said. “Hypertonic saline and all the research and support at UNC, it’s just incredible. They are so supportive, have so many resources like CF family nights and education seminars, and are available to talk night and day. I didn’t feel like I had to do so much research on my own. We’ve learned so much from our UNC family to help keep our kids healthy.” 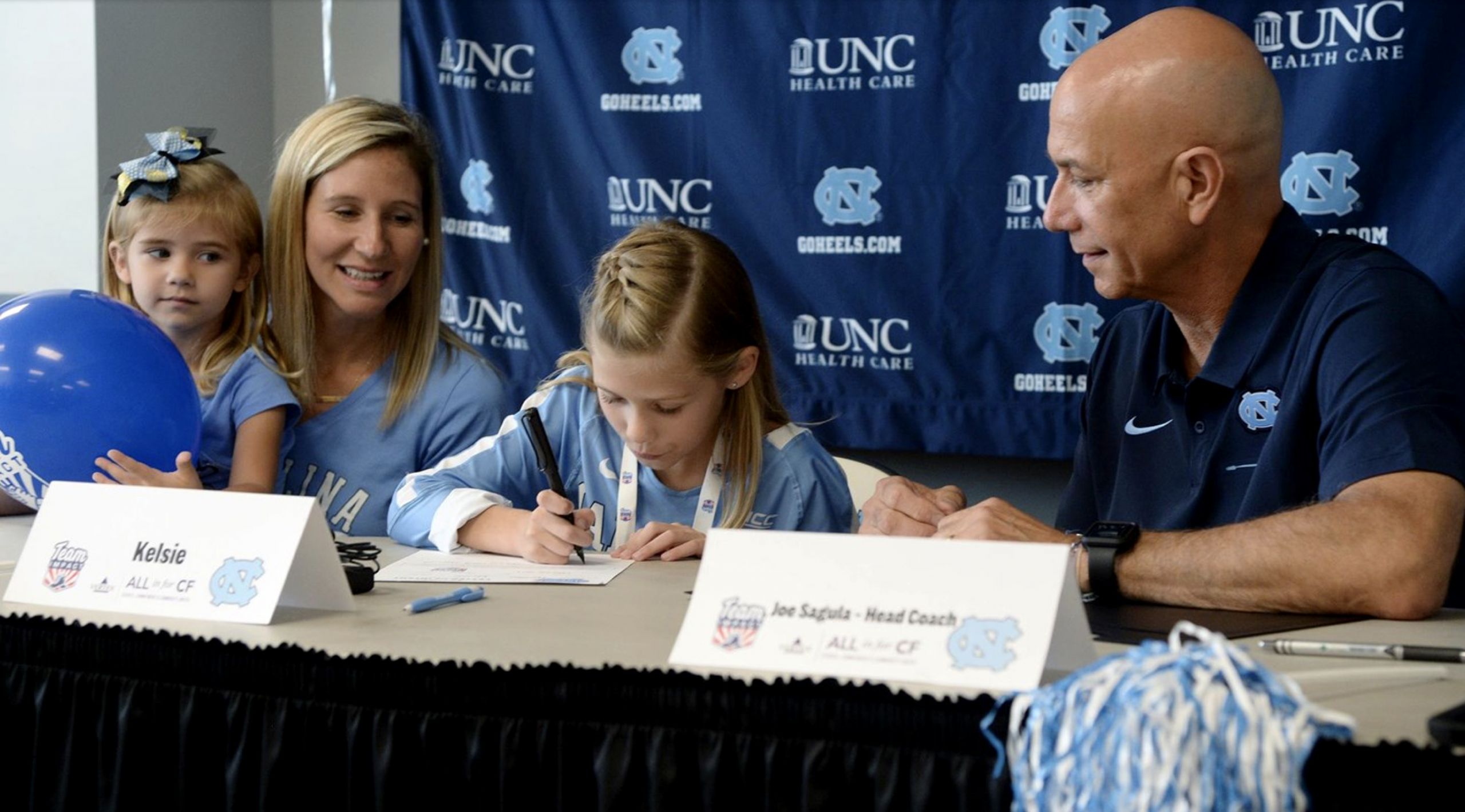 In the first part of the 20th century, when there were no therapies, babies with CF would usually die before their first birthday. In the middle of the century, it was rare for CF patients to reach age 20. Thanks to a few therapies, doctors predicted babies born in the late 1980s might live to about age 29. With the advent of more treatments, predictions for babies born today reach into their late 40s.

New medicines are expected to increase life expectancy, but the Houstons haven’t focused on these statistics. They’ve concentrated on their kids’ immediate health, advocacy for those with the disease and allowing their kids to be kids.

Before 2015, the parents shied away from networking with other CF families.

“I was afraid to see what a more advanced stage of CF might look like,” Kimberly said. “But when Mackenzie was born, we decided we could not sit back. We wanted to share our story and advocate for people with CF.”

The Houstons created Team Take It Away four years ago, raising $12,000 to $14,000 each year between 2016 and 2018 for the Cystic Fibrosis Foundation. In 2019, they added an event for families in downtown Pittsboro, including a 5K run and a bike ride, to raise more than $37,000. A local business owner, Mike Key, donated $2,500 to the cause and hosted a golf tournament to contribute another $35,000, making Team Take It Away one of the top 30 foundation fundraising teams in the country. The Houstons are forming a Team Take It Away nonprofit for their 2020 fundraising campaign. 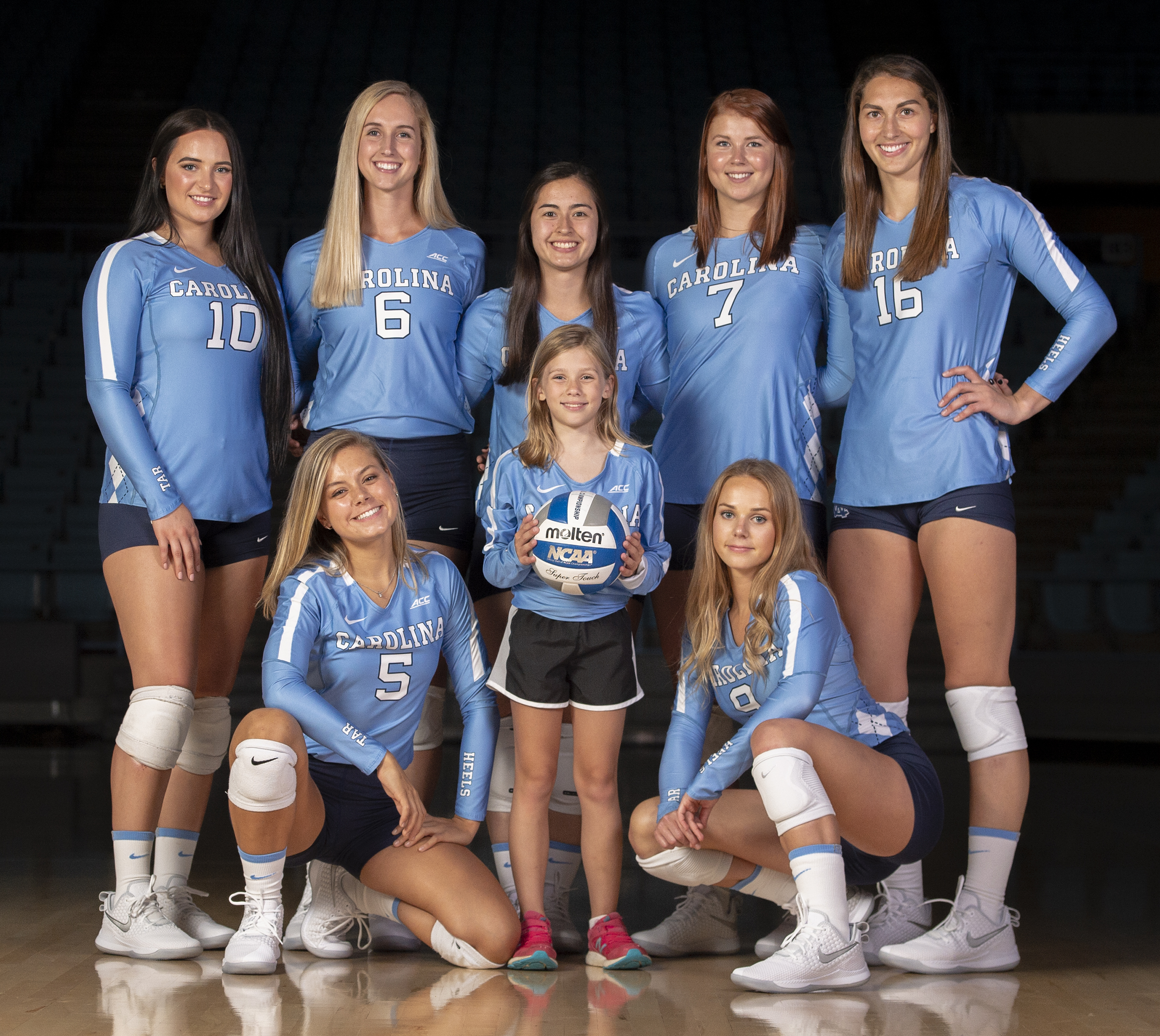 “We have been overwhelmed by the support of family and friends, community members, our UNC family and many local businesses,” Nathan Houston said.

“I really like sitting on the bench and high-fiving the players during the games,” Kelsie said. A highlight of the fall season was when the team hosted CF Awareness Night at Carmichael and made Kelsie a team captain.

“My godmother has cystic fibrosis,” said Annabelle Archer, a sophomore setter on the team. “Seeing how important it is to live a normal life has helped me connect with Kelsie. She is just such a relief, you know, when you get off the court and see this smiling face of this little girl you want to go talk to. It’s just cool to have her on the team.”

Tears for some relief

Vertex has played another role in Kelsie’s life since she began taking Symdeko, a combination CF drug for kids 6 and older with twocopies of the F508delta mutation of the CFTR gene. Symdeko can improve CFTR function so much that some patients have been able to decrease their daily therapies, relieving some of the burden of battling the disease.

“When I told Kelsie this, I couldn’t help but break down in tears,” Kimberly said. “It would be such a game changer for us and so many families.”

A new drug called Trikafta, a triple-combination therapy that contains the two medicines in Symdeko and a third Vertex drug, is on the horizon for Kelsie and Mackenzie. Trikafta clinical trial results were so good that the FDA said it would finish its typical 12-month review process in eight months. It finished in two, and in October approved Trikafta for those 12 and older.

“We hope it gets approved for younger kids as soon as possible,” Kimberly said. “But to know this drug works so well for more than 90 percent of people with CF is just amazing.”

UNC doctors have told the Houstons that Trikafta will be a much better therapy than Symdeko.

“It will be a total game changer,” Donaldson said.

Kimberly Houston said such breakthroughs are exciting. “CF could be a completely different disease in a couple decades,” she said. “And I know, for us, we’ve never considered anything but our kids living really long lives.”

Dr. Francis Collins ’77 (MD), director of the National Institutes of Health, was interviewed on NPR about the recent breakthrough in cystic fibrosis therapy.