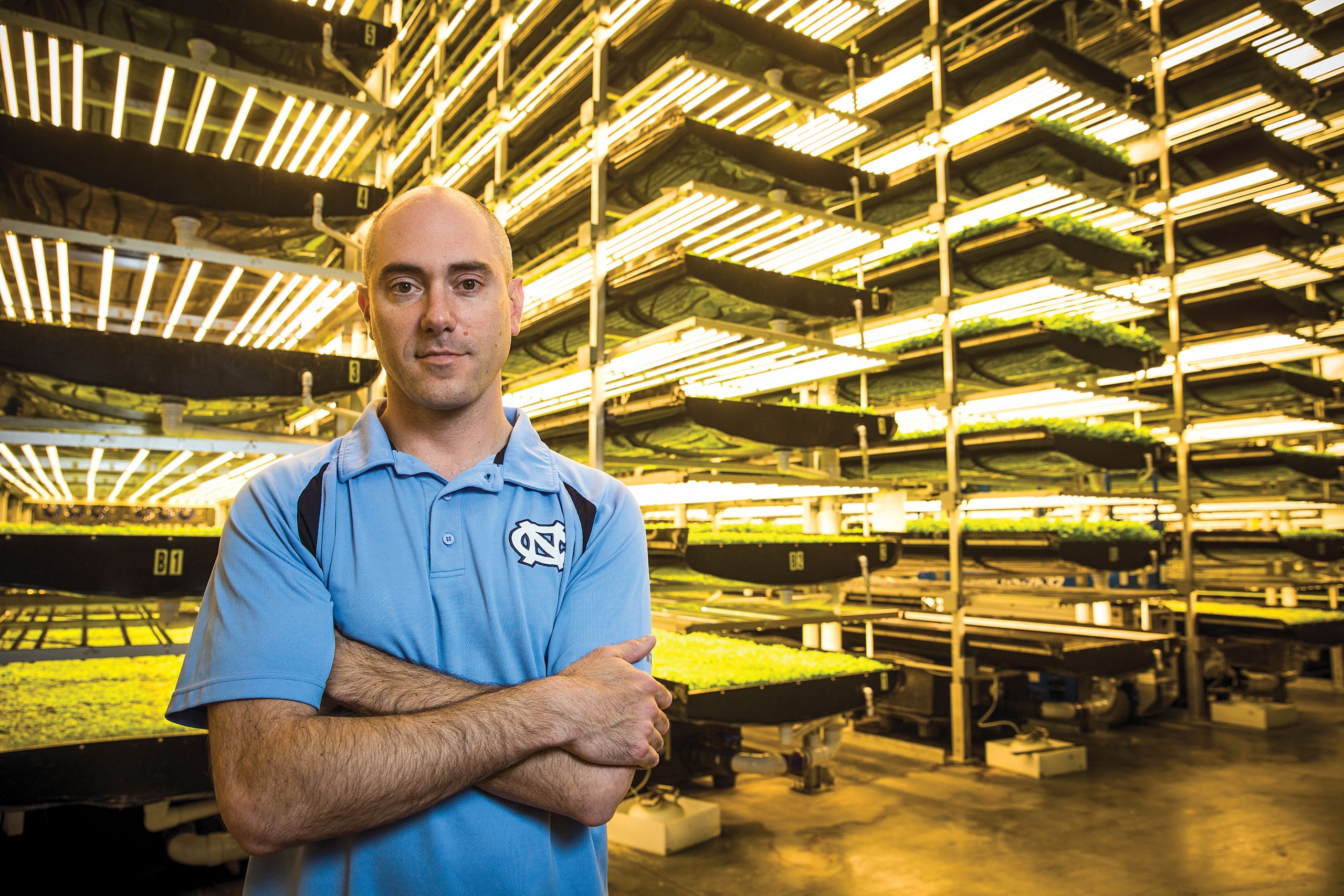 The future of America’s dinner plate is looking up. Consider a converted steel mill in the Ironbound section of Newark, N.J., where one of the world’s largest indoor vertical farms is upending notions of farming as usual.

Arrayed across the 69,000-square-foot complex are growing trays stacked 36 feet to the ceiling, each filled with varieties of salad greens, herbs and kale, and all of them planted in reusable cloth. The plants’ bare roots are fed with a nutrient-rich aeroponic mist and nurtured, not by the rays of the sun, but with climate controls and broad-spectrum LED lighting that looks white to the eye. “The human eye can’t capture the dance that’s going on within the spectrum,” says David Rosenberg ’94, the entrepreneur in charge of AeroFarms.

The engineered lighting allows AeroFarms to control the size, shape, texture, color, flavor and nutrition of the plants. Scientists monitor more than 120,000 data points — including mineral and element absorption levels — for every harvest. Plants are subject to climate controls that start at 70 degrees, depending on the variety and whether they’re germinating.

As a bouquet of chlorophyll permeates the air and the aeroponic pumps keep metronomic rhythm, scissor lifts and forklifts traverse a facility that’s often cultivated by two shifts.

The practice is hailed for its sustainability, keeping crops closer to consumers and cutting fuel costs associated with transporting produce long miles to market. The future of vertical farming could be bright: The United Nations reports that 66 percent of the world’s population will live in urban areas by 2050 — a total projected to exceed 6 billion. 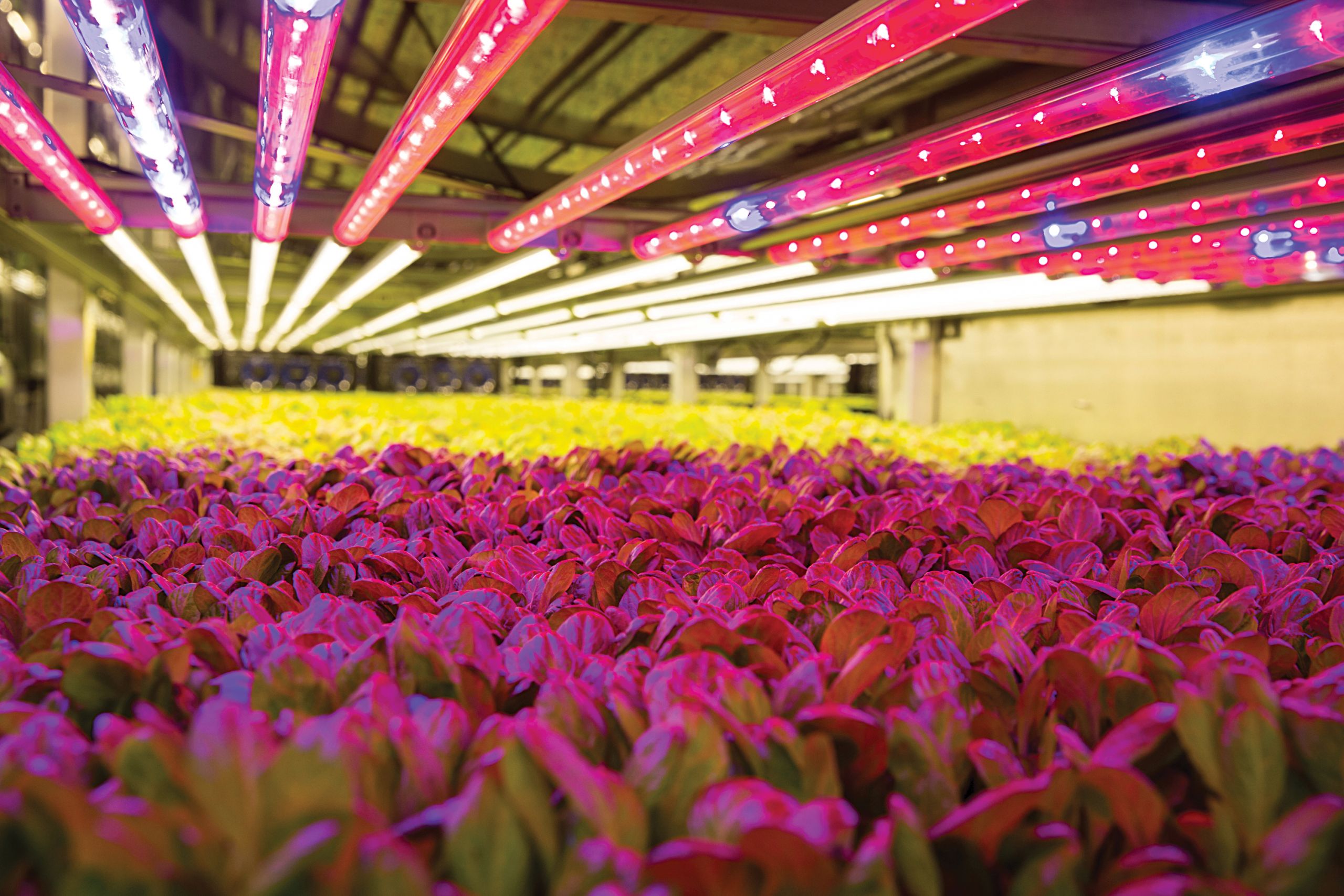 As CEO and “chief salad maker,” Rosenberg is leading the charge. His vertical farm is among a burgeoning number of such operations around the world. Outside Newark, Rosenberg’s technology is being used in Ithaca, N.Y.; Chicago; Seattle; and in the more agriculturally inhospitable climes of Jeddah, Saudi Arabia.

“We can grow a plant using 95 percent less water, zero pesticides and half as many fertilizers,” Rosenberg said.

And, says Anthony Moraes, former chef at upscale Eleven Madison Park in Manhattan and now a chef at Facebook’s New York office: “The flavor is pure and unadulterated. It’s a major breakthrough from a culinary perspective.”

The AeroFarms recipe for tasty produce?

“We don’t genetically change the plants, but we stress them in a way that essentially causes them to eat, sleep and exercise differently,” Rosenberg said. “It changes what’s called their phytochemistry. So we can, for example, make arugula more peppery, or kale less bitter and more tender.”

Because crops can be cultivated year round, vertical farming is 75 times more productive per square foot than a commercial field farm. But the practice isn’t without critics. Generating electricity to grow plants — as opposed to letting them germinate in sun-drenched fields — can create greenhouse gases that contribute to global warming. That’s offset, supporters counter, by less fossil fuel being used to transport food long distances.

“We can grow a plant using 95 percent less water, zero pesticides
and half as many fertilizers.”

Practical reasons alone demand new thinking on food production, Rosenberg says. “The world has lost 30 percent of its arable land in the last 40 years, so we need a new paradigm to how we’re going to feed our planet,” he said. “We’re becoming more efficient every day.”

And “we develop tastes and textures that are fantastic,” he added. “We have engineers, crop biologists, physiologists, horticulturists, plant pathologists and microbiologists all working on it together. People are eating our greens without salad dressing, because they want to experience our tastes and textures.”

One of AeroFarms’ clients is Local Bushel, a New York-based business that connects restaurants with local farms to “make good food more accessible.” The company, founded in January 2014, soon discovered it had a partner in Rosenberg.

“We were in the depths of winter, when nothing is growing in the field,” said Local Bushel CEO Yusha Hu. “Our customers were very hungry for greens. We reached out to AeroFarms. Vertical farming is a great way to bring sustainable jobs and new economic opportunities to urban areas, and having the food grown closer to the consumer makes it possible to deliver very fresh product, without any artificial processes or preservatives.”

AeroFarms was founded in 2004 and has since raised more than $60 million from investors. “These people are excited about our social and environmental impact, and they want to make a buck,” Rosenberg said. “We certainly are a for-profit business, and we think of shareholders as well as these other environmental and societal considerations.”

The Newark facility opened in 2016, and it expects to ultimately grow 1.7 million pounds of produce annually.  The company plans to build up to 50 more farms in the U.S. and abroad.

Students at nearby Philip’s Academy Charter School are some of the company’s earliest beneficiaries. The school, whose curriculum encourages healthy connections to food, has two of AeroFarms’ growing platforms in its cafeteria.

“AeroFarms was looking for a place to put their prototype in Newark, and it was the perfect alignment,” said Frank Mentesana, the school’s EcoSpaces education director. “We use it as a learning tool to teach alternative growing systems and local consumption. Our AeroFarms system is in the dining room. … I’m not sure it gets more local than that.” 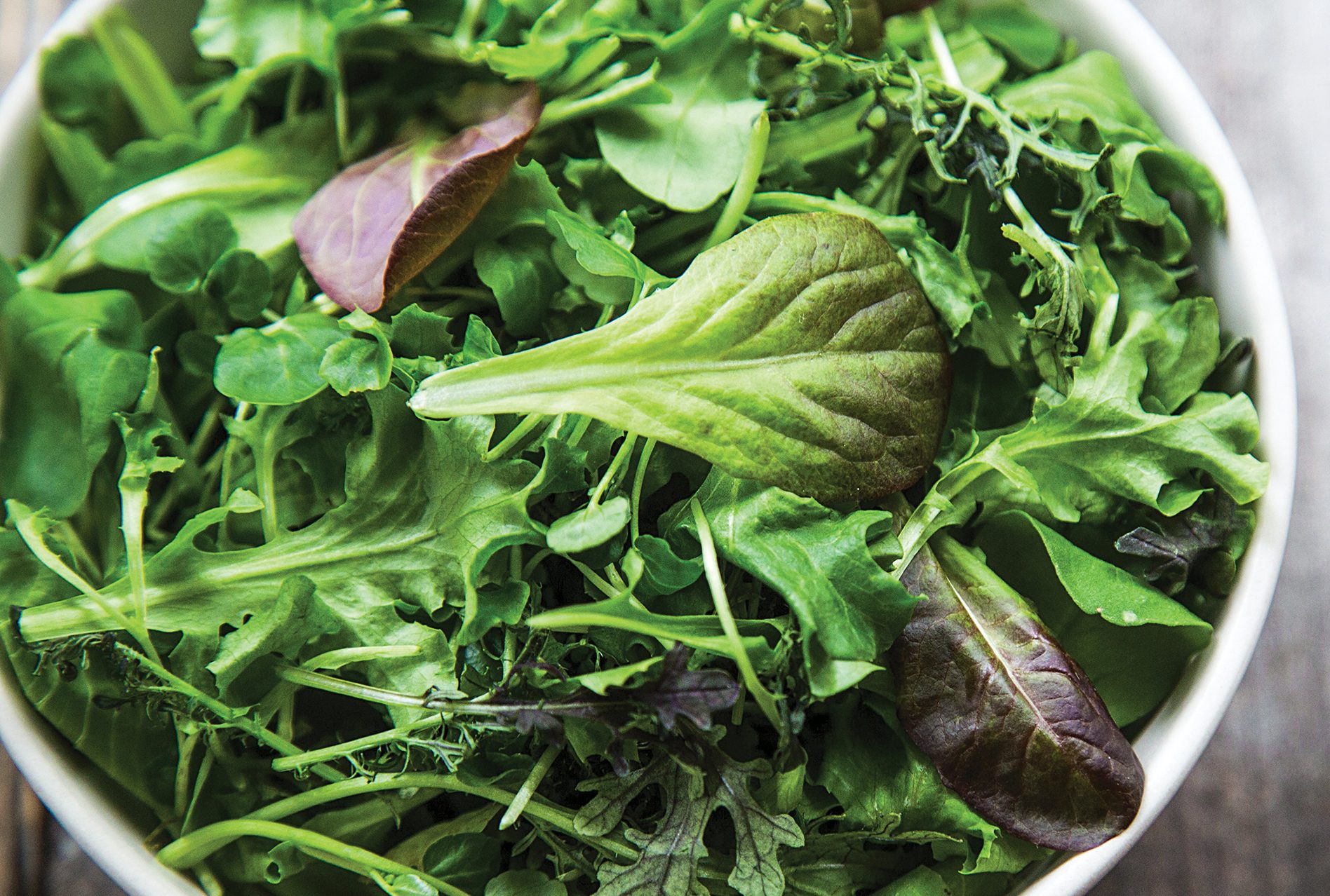 In April 2016, then-first lady Michelle Obama toured the school’s rooftop vegetable garden and observed the AeroFarms equipment, a visit that was part of her “Let’s Move!” initiative to eliminate chronic obesity, in part through providing healthier foods in schools.

AeroFarms’ efforts address other challenges. Newark long has been known as a food desert, a region in which poor residents have limited access to nutritious food and any available produce is often  past its prime.

“In the category of leafy greens, there’s 62 percent spoilage, so producing food locally is going to eliminate a lot of that spoilage,” Rosenberg said. “This is a real opportunity to have better quality food.”

For now, the price of vertically grown produce is the same as organically produced vegetables, but as technology improves, “there’s certainly a window to lower costs,” Rosenberg said. Customers include New York restaurateurs and New Jersey-based ShopRite Supermarkets. AeroFarms also supplies produce to the employee cafeteria at the financial services firm Goldman Sachs.

From finance to food

Rosenberg majored in political science at UNC, where he also was captain of the varsity fencing team, but the experience was formative beyond the classroom. He met his wife, Laura Popp-Rosenberg ’94, now a partner in a New York law firm, in Chapel Hill. “She’s my toughest critic, but she also gives me good ideas, and she’s my strongest ally,” Rosenberg said.

After UNC, Rosenberg worked as a Wall Street banker and then earned an MBA from Columbia University. But serendipity intervened. A relative told him how Rosenberg’s late grandfather had created a molecule that could weatherize concrete. That led Rosenberg to start a business called Hycrete, where he was CEO from 2002 to 2011. It was there that his aspirations began hewing toward social entrepreneurship. Construction, Rosenberg observes, has a “huge environmental footprint.”

“The biggest item to the landfill is concrete,” he said. “I developed a way to redesign buildings to keep concrete out of landfills and essentially do more with less.”

When Hycrete was sold, Rosenberg used his proceeds as seed money for AeroFarms. Sustainable farming turned out to be a natural progression. Because of Hycrete’s water-proofing properties, Rosenberg already had taken an interest  in water management. He learned that 60 percent of the world’s fresh water goes to agriculture and that more than half of all fresh-water contamination derives from agriculture. AeroFarms was born.

“I got a bug in environmental stewardship leading Hycrete,” he said.

AeroFarms has been recognized as a Circular Economy 100 business by the Ellen MacArthur Foundation, whose commitment to a “circular economy” hails entrepreneurs who veer away from a “take, make and dispose” economy in favor of one that fosters innovation and waste reduction.

Not that vertical farming by itself is the solution to the global food crisis, which is both immense and growing:  The United Nations-sponsored Food Security Information Network reported in March that 108 million people in four countries in particular — Nigeria, Somalia, South Sudan and Yemen — face food insecurity because of armed conflict, drought and economic collapse. And that total is up from 80 million in 2015.

Rosenberg is an active member of the World Economic Forum, a nonprofit organization that convenes 2,500 business leaders, political leaders and intellectuals to discuss pressing issues facing the world. He has become a frequent participant in the forum’s annual meeting in Davos, Switzerland, and co-chairs the organization’s technology and innovation group of agriculture.

Despite not being a cure-all, Rosenberg says, vertical farms can be a tool in fighting hunger.

“The world needs to think holistically, creatively,” he said. “And it’s not just technology; it’s also thinking behaviorally. AeroFarms and vertical farming are illustrative of how technology can be a catalyst to provide positive change to agriculture more broadly.”

Andrew Faught is a freelance writer based in California. His profile of
art quilter Chawne Kimber ’95 (MS) appeared in the May/June 2017 Review.