When Rob Rivers ’73 goes into battle, he likes to know the lay of the...

The Art is Formally Known as Prints 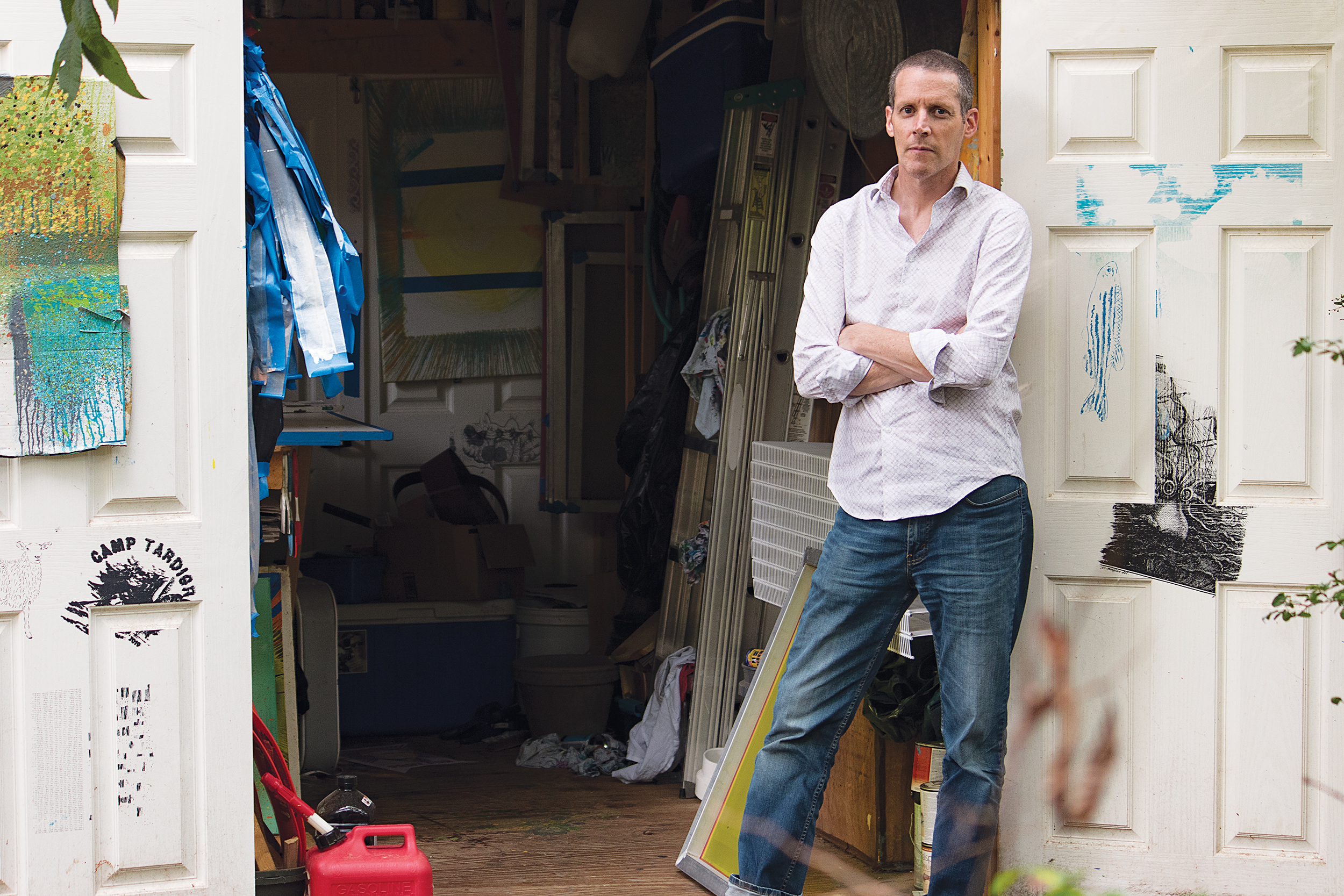 Somebody forgot to tell Bob Goldstein that he couldn’t just do any old thing he wanted to.

He couldn’t make a giant portrait of Mahatma Gandhi out of beer bottle caps and hang it in his living room. He couldn’t set up a critter cam, complete with website, so he and his kids could find out what kinds of animals were cruising through their suburban Carrboro back yard at night. He couldn’t rotate huge canvases with a power drill, throw paint at them and call the results spin art. Or make multiple-exposure images of seagulls and pelicans and other birds in flight. Nobody told him not to become a highly respected and highly cited researcher and distinguished professor in cell and developmental biology at Carolina. Or to keep a marble rolling for three minutes in his living room on a giant track built out of popsicle sticks.

Somebody forgot to tell Goldstein not to make rock-show-style flyers for scholars giving talks on campus. Gig posters for scientists? Nobody does that. They don’t do it by hand, with squeegees and ink, out in a tiny shed in their back yard. And even if they did, they probably wouldn’t start making prints for the sheer love of it, art for art’s sake, and probably no galleries would come calling.

Peel Gallery in Carrboro exhibited Goldstein’s prints from Sept. 10 through Oct. 17. During 2020’s quarantine he started screen printing homemade public service announcements about pandemic safety and stapling them up around Chapel Hill and Carrboro.

“My son and I posted them publicly late at night,” he said. “And I worried about the future. At times our chickens walked into the shed, and eventually, they crept into the artwork.”

Most of the prints in Goldstein’s exhibit imagine a future with no people: Pandemics, global warming and plain old human nature have teamed up to eliminate Homo sapiens. Goldstein says the silver lining in his imaginary scenario is that the Earth has moved on without us. The animals and plants are doing well, even if some of the domesticated animals have had to claim our buildings and move indoors.

A few years ago, not long after the science-steeped Goldstein was getting more serious about making art, I was talking with him and a mutual friend who’s an artist. Goldstein said he thought some artists decide exactly what they want before starting a work, and then work hard to produce what they already wanted. Our artist friend replied that he didn’t consider those people to be artists.

Thinking back on that response, Goldstein said, “I think it was partially hyperbole — you know, for humor. But only partially. I do like when I can adjust [a print] as I go, so I’ve been trying some tricks that allow that. And more broadly, I think of each print as an experiment for a future one. That’s science-y, right?”

*Okay, it’s formally known as printmaking. But that’s not nearly as funny, is it?