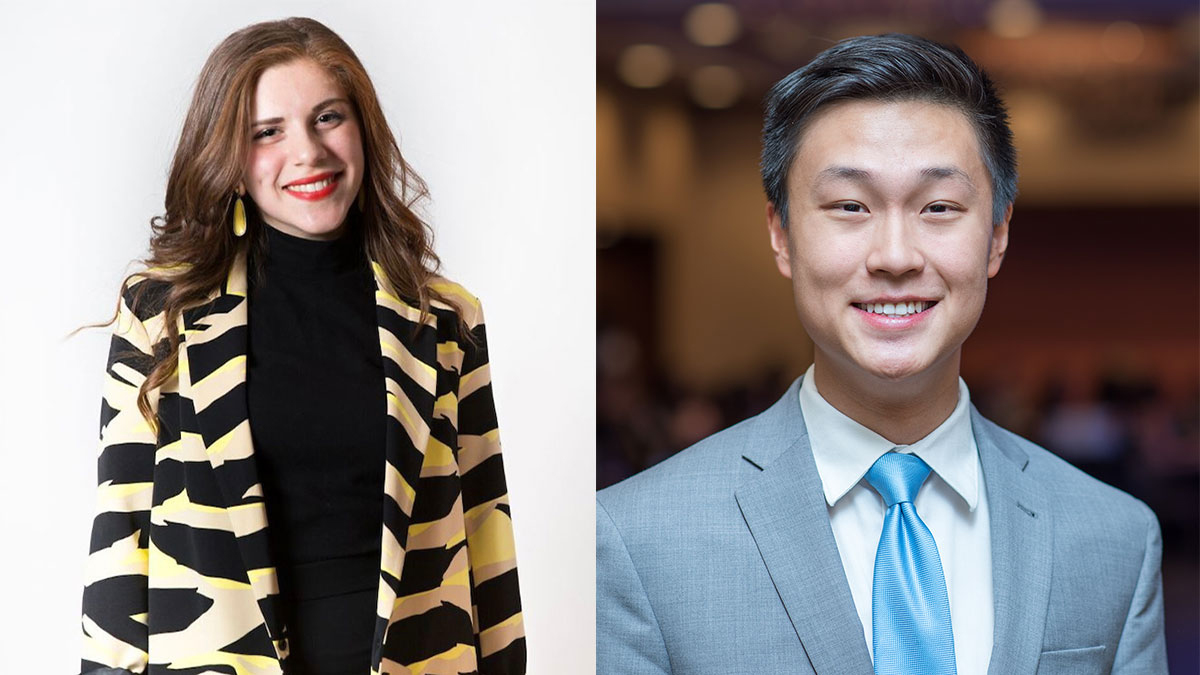 Two young alumni have been selected for the elite Schwarzman Scholars Program.

Yusheng Zhang ’19 and Sandy Alkoutami ’18 earned entry to the innovative master’s degree program, modeled on the Rhodes Scholarship, that supports study at China’s prestigious Tsinghua University and bridges the academic and professional worlds to educate students about leadership and China’s expanding role in the world. They are the eighth and ninth to be chosen for the program from UNC.

Zhang, a Carolina Honors student with degrees in business administration and global studies and a minor in music, will pursue a degree in global affairs at Beijing’s Tsinghua University. He also has studied at Copenhagen Business School and the Chinese University of Hong Kong.

Zhang founded 180 Degrees Consulting-UNC, was president of the Carolina International Relations Association and co-organized the 2018 Duke-UNC China Leadership Summit. After graduating, he worked as a research associate for the Global Entrepreneurship Network, a Fortune 50 company and a microfinance nonprofit. He is currently a consultant at Ernst & Young.

Zhang is passionate about helping nonprofits that address social causes, from poverty eradication to food access, and in creating a unified vision for governments, nonprofits and investors. While working as a China analyst for Fortuna Holdings, he drafted a government grant pitch for an indoor hydroponic greenhouse startup that would quickly and economically produce fresh fruits and vegetables in the Beijing suburbs.

He soon realized that the company could not fully achieve its social mission of reducing the local community’s reliance on imported produce unless mentors and investors understood Beijing society. Such experiences, he said, have led him to believe that when investors do not understand an emerging market’s culture and history, their subsequent reluctance to invest in the region’s entrepreneurs both weakens financial infrastructure and smothers innovation.

Alkoutami, a Morehead-Cain Scholar, studied public policy and economics with a minor in Islamic and Middle Eastern studies. She graduated with highest distinction and was awarded honors for her public policy senior thesis, “Understanding Insurgent Behaviors: The Effect of External Support on Insurgent Violence in Civil Conflicts.”

As a Carolina student, Alkoutami worked as a student foreign service intern at the U.S. State Department and the Lebanese Embassy, interned for House committees on the judiciary and foreign affairs and interned at the State Department’s Global Engagement Center.

After graduating, she was an English teaching assistant at the Islamic Educational College in Amman, Jordan, while interning with the refugee resettlement agency Questscope under a J. William Fulbright Scholarship. As a Fulbright Fellow working in refugee camps, Alkoutami was able to initiate and implement resettlement programs while observing China’s investment in Syria.

For the past year, Alkoutami has been a James C. Gaither Junior Fellow with the Middle East Program run by the Carnegie Endowment for International Peace in Washington. Her research has focused on sub-state militia integration and proxy war intervention in Libya and the electoral state of affairs in Algeria.

Alkoutami said she feels invested in conflict resolution and matters relating to political, economic and social change in the Middle East and North Africa. She believes U.S. and Chinese policies toward the regions are central to conflict resolution in Syria and its Arab neighbors.