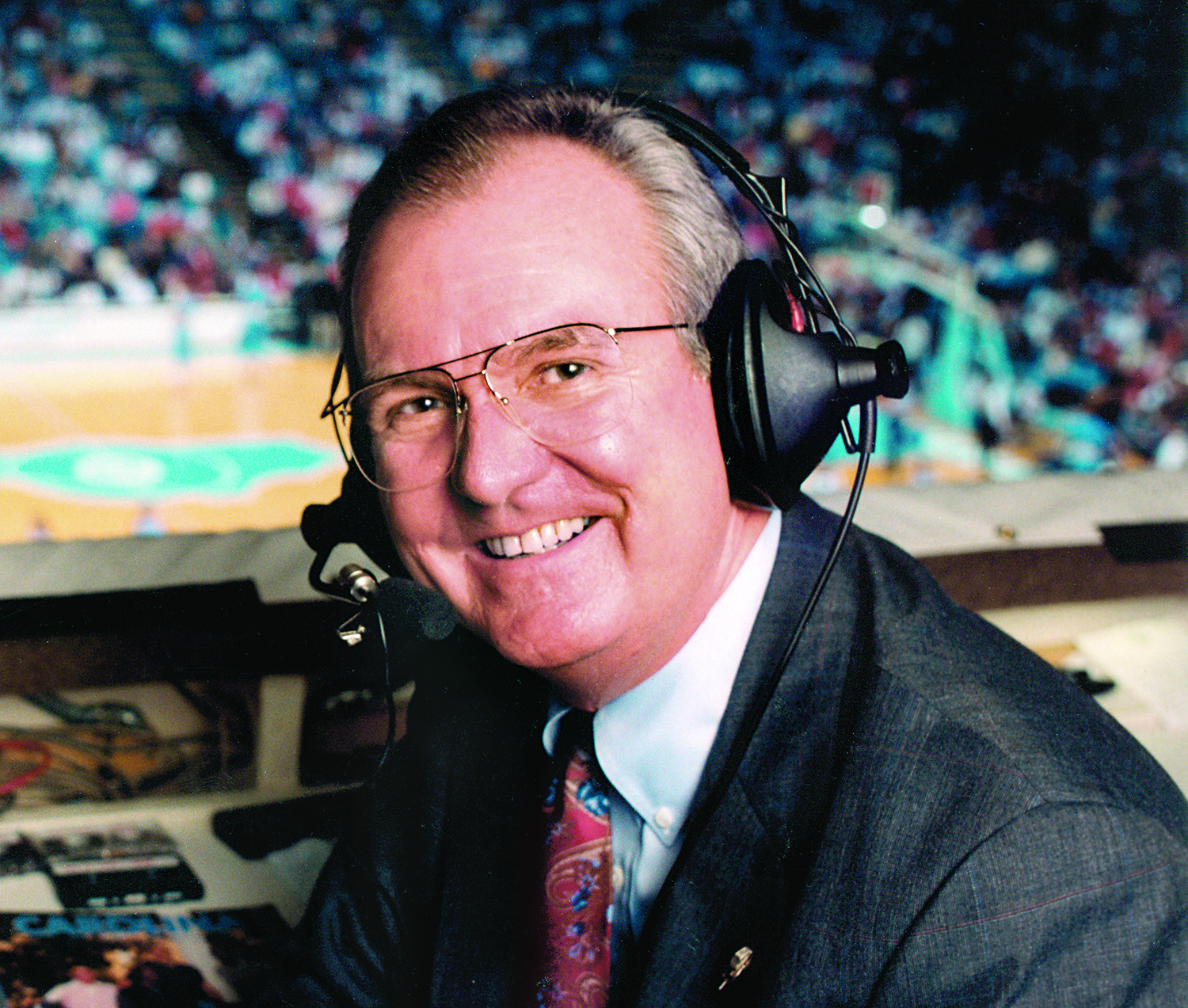 Woody Durham ’63, the beloved and iconic Hall of Fame voice of Carolina basketball and football for 40 years, died peacefully at home on Wednesday from complications from primary progressive aphasia. He was 76.

Durham was the radio voice of the Tar Heels from 1971-2011, painting a vivid picture of Carolina athletics for generations of fans, and became himself a Carolina institution.

“It’s a very sad day for everyone who loves The University of North Carolina because we have lost someone who spent nearly 50 years as one of its greatest champions and ambassadors,” said basketball coach Roy Williams ’72. “My heart goes out to Jean, Wes, Taylor and their entire family.

“It’s ironic that Woody would pass away at the start of the postseason in college basketball because this was such a joyous time for him. He created so many lasting memories for Carolina fans during this time of year. It’s equally ironic that he dealt with a disorder for the final years of his life that robbed him of his ability to communicate as effectively as he did in perfecting his craft.

“Woody loved the Tar Heels and players, coaches and fans of all ages loved him right back. We should all ‘go where we go and do what we do’ and say a prayer for Woody and his family. There will never be another quite like him.”

Durham received the Curt Gowdy Media Award for contributions to basketball from the Naismith Memorial Basketball Hall of Fame in 2015.

“Our family is grateful for the incredible support my dad and our family received throughout his illness,” said his son Wes Durham, who along with his brother Taylor, followed their father into sports broadcasting. “From the medical teams to the general public, it’s been amazing. We hold to and will always cherish the wonderful memories he left for our family and Carolina fans throughout the world.”

Born in Mebane and raised in Albemarle, Durham was sports director at WUNC while attending Carolina, then was sports director at WFMY-TV in Greensboro (1963-77) and at WPTF-TV in Raleigh (1977-81). Since 1981, he worked for the Tar Heel Sports Network with VilCom Inc. of Chapel Hill and Learfield Communications Inc. of Jefferson City, Mo.

“Woody was synonymous with Carolina athletics for decades and his voice was gospel to generations of Tar Heels who trusted his every word,” said John Swofford ’71, commissioner of the Atlantic Coast Conference and former UNC athletics director. “I was struck by how diligently Woody prepared for his broadcast of games. When game time arrived, he made it look and sound so easy because he had a voice that resonated just so, but much of it was because he worked incredibly hard at it. He was just as good a person as he was a broadcaster.”

“I am filled with sadness at the loss of a mentor, friend and Carolina icon,” said Jones Angell ’01, who succeeded Durham as play-by-play announcer for Carolina basketball and football after Durham’s retirement in 2011. “Woody meant so much to me personally and professionally, and I feel honored to have worked with him and learned from him. We try to reach the standard of excellence Woody set for 40 years through his passion and professionalism on every broadcast on the Tar Heel Sports Network.”

The Atlantic Coast Sports Media Association will honor Durham this week at the ACC Basketball Tournament with the Bob Bradley Spirit and Courage Award, recognizing the grace and dignity with which in recent years he publicly dealt with primary progressive aphasia, a degenerative brain disorder that negatively impacted his ability to communicate.

In June, Durham will be inducted into the National Sports Media Association’s Hall of Fame.

Among other awards, Durham received the Distinguished Service Medal from the GAA for outstanding service to the University and the association; the William R. Davie Award, given by the UNC Board of Trustees to recognize extraordinary service to the University; the Skeeter Francis Award for special service to the ACC; the Russell Blunt Legends Award from the N.C. High School Athletic Association for being a true legend in athletics, and he also received its Distinguished Service Award; the Lindsey Nelson Outstanding Sportscaster Award from the All-American Football Foundation; the Outstanding Service Award from the Lineberger Comprehensive Cancer Center Board of Visitors; and a Priceless Gem from UNC athletics.

He is survived by his wife, Jean, to whom he was married for 54 years; sons Wes and Taylor; and two grandchildren, Emily and Will. Wes Durham is the radio voice of the Atlanta Falcons and broadcasts college football and basketball for Raycom Sports and Fox. Taylor Durham is the play-by-play announcer for Elon University.

A celebration of Durham’s life is planned for Sunday, April 8 at Carmichael Arena.

Carolina fans are encouraged to share their favorite memories of Woody via Twitter @GoHeels using the hashtag #HeyWoody.

From Booth to Bookshelf: A Longtime Broadcaster Learns to Be a Fan Again (Jan/Feb 2013 Review)