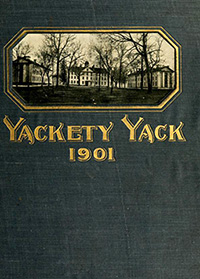 The Yackety Yack debuted in 1901

About two years ago, Wilson Library added more copies of Carolina’s yearbook to its digital archive. Now the question is: Will there be any more to add to it?

The Review reported two years ago that the 2011 Yackety Yack was published a year late and that few orders had been placed for the 2012 yearbook.

Add to that: The 2013 Yack was canceled, and as for 2014, the organization’s office in the Union closed during the summer and its contents were placed in storage.

In March, seniors lined up to have their pictures taken, but early this fall, Trey Manning, the senior who was the Yack’s business manager last year, wrote in an email: “I am unsure of the future of the organization at this point. The Yack may not be in continuation as an organization. There has been no student involvement and no publications over the last three years. No staff has been appointed to take the lead at this point.”

Enter Mary Katherine Ward. The junior has partnered with two classmates who worked with her on the yearbook at Morehead High School in Eden to try to breathe life back into what alumni see as a treasured tradition but which has not held the interest of students who have worked on the book for the past two years.

Ward was on the Yack’s photography staff her freshman year. After consulting with Manning, she said she volunteered to attempt a revival “if nobody stepped up.” She has contacted Walsworth, a yearbook publishing company that printed the Yack until a few years ago.

In mid-October, Ward had scheduled a meeting to gauge student interest in joining her and had a meeting set with Walsworth to talk about a contract. She also anticipated recruiting a board of directors, which is specified in the organization’s bylaws.

There have been several signs of decline. For 2008, 2009 and 2010, the Yack sold 432, 400 and 300 copies, respectively. The 2010 book included an apology from the editor-in-chief, Stephanie Hertz ’12, who said she had inherited the position unexpectedly in May of that year, “and with the editorship came the discovery that there were no pages completed.”

The editor of the 2011 book was asked by its board of directors to step down when it was apparent that it wouldn’t be finished on time.

The 2011 book sold for $106; the 2012 edition was a dollar more — a price based on the number of pages — andhad become a print-on-demand book. Organized as a 501(c)3, the Yack cannot sell advertising or charge any entity for appearing in the book.

The Yack debuted in 1901, succeeding a yearbook called the Hellenian that first appeared in 1890. Until 2013, the Yack had been published annually.